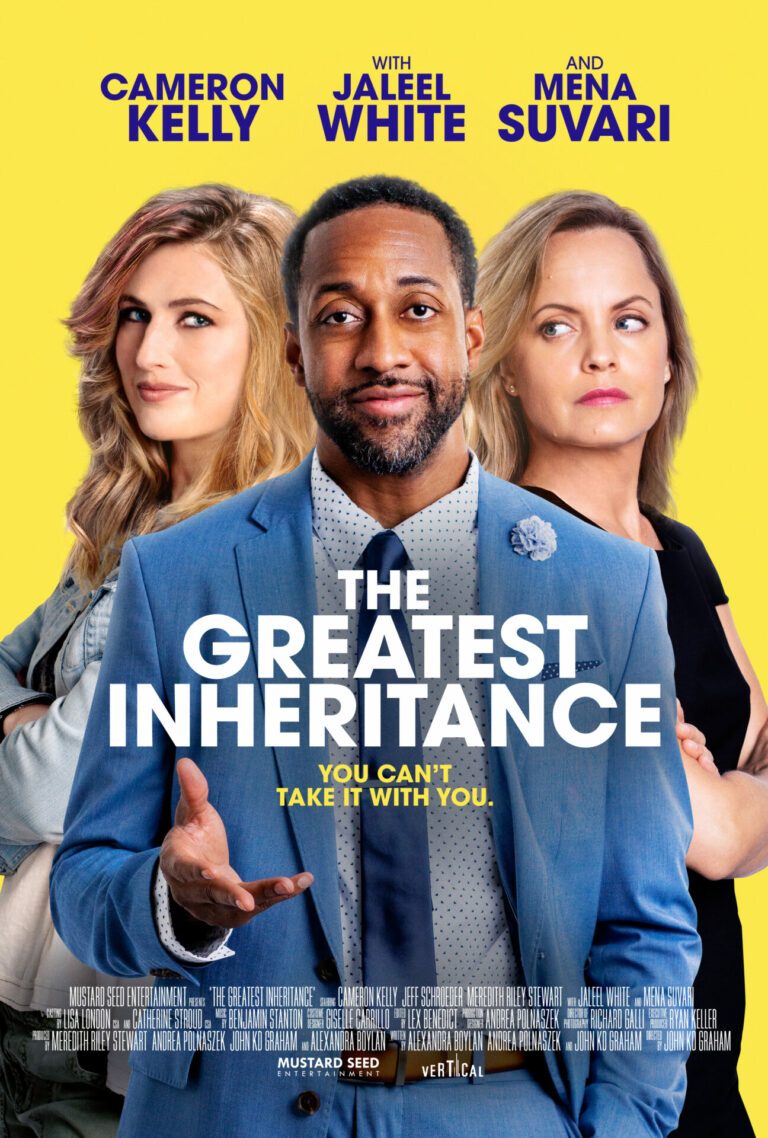 THE GREATEST INHERITANCE is a family comedy on Amazon Prime and Apple TV+. It’s also available on Video on Demand. The story follows four adult siblings, Casey, Carey, George, and Rachel, who reunite for a memorial for their late mother and claim their inheritance. However, getting the inheritance won’t be as easy as they think. Their mother has created some challenges. The challenges lead to clues pointing to the location of their mother’s will, which includes the deed to her estate. They’ll just have to work together to see who gets the greatest inheritance.

(CCC, BBB, P, V, M):
Dominant Worldview and Other Worldview Content/Elements:
Very strong Christian, biblical, moral worldview quotes Scripture frequently and extols prayer, forgiveness, kindness, grace, and serving God’s Kingdom, with light patriotism where a man wants to run for mayor to help improve communities
Foul Language:
No foul language
Violence:
Mention of a car wreck in the past, and a man getting hurt falling off stage
Sex:
No sex
Nudity:
No nudity
Alcohol Use:
No alcohol use
Smoking and/or Drug Use and Abuse:
No smoking or drugs; and,
Miscellaneous Immorality:
Light family dysfunction like eavesdropping and some bickering but ultimately resolved, siblings handcuff a man to speed up getting their inheritance, but it’s more playful than malicious, and they give him the key to unlock it, a theft but discovered and rebuked, and cheating in a game but rebuked.

The story begins with Casey Striker, a music star who’s running low on money, on her way back to her childhood home to mourn her mother death’s alongside her family. Casey’s sister, Rachel, brother-in-law, Lance, and niece, Emily, pick her up and finish the commute to their late mother’s estate where their brother, George, his wife, Sophia, and their other sister, Carey, are waiting.

Upon their entry to the home, the family meets the executor of the will and lawyer, Mr. Sheppard. They move to the backyard to share a few words about their late mother and spread her remains. However, less than five minutes afterwards, Casey asks about the will. This comment triggers Mr. Sheppard to begin reading her wishes. The only problem is, Mr. Sheppard doesn’t have the will as everyone supposes. Instead, he tells the family that the deed to the estate is hidden somewhere on the property, and the first one to find it inherits the entire estate.

Everyone at first thinks this is a joke at first, but then begin frantically searching the grounds. After not being able to locate the will, Mr. Shepard says that their mother created challenges that, when completed together, lead to clues to find the deed. Apparently, their late mother was a fan of creating games, so this wasn’t out of character. Still, why couldn’t she just tell them who gets the inheritance?

At dinner that evening, the table conversation flows until Casey relays her perspective about why her music career is finished. Casey’s guitar player got pulled into a mosh pit until Rachel pulled him back on stage and resuscitated him and recommended a surgery that would allow him to play in the future. The only problem was, he didn’t go back on tour with Casey, but Rachel did get a TV job later, which led to fame and fortune.

Despite some family strife, the siblings resume their efforts to complete their mother’s challenges and find the will. However, Casey and her siblings get impatient with the timeframe set by their mother. So, to speed things up, they handcuff Mr. Sheppard as he tries to sleep so they can consult the book of challenges that will lead them to the clues. He wakes up, though, then tells them that, since they tried to go off-script, now they will only have until sunset the next day, or the estate will go to charity.

Can they put aside their differences and make the new deadline?

THE GREATEST INHERITANCE isn’t trying to be cutting edge. However, it’s a perfectly well-paced, engaging, playful, and heartwarming movie. The cinematography is good, establishing shots are used effectively, and there’s a good mix of wide, long and close-up shots that won’t distract viewers. The background music is light and mixes well with the onscreen action. In addition, the movie is well-cast, and the actors play off one another with ease.

THE GREATEST INHERITANCE has a strong Christian, biblical, moral worldview and little to no objectionable content. Characters quote Scripture frequently and state the verse refence in some scenes too. The movie extols prayer, forgiveness, kindness, and grace. Also, a husband encourages his wife to make up with her sister. In addition, using one’s gifts to serve the Kingdom of God ultimately drives the plot and eventually motivates the characters as well. Furthermore, the song “Amazing Grace” is heard in one scene. Finally, THE GREAT INHERITANCE promotes taking care of sick parents and includes a man who wants to be mayor to help his community.

Alexandra Boylan and several other members of the writing and production team are friends of MOVIEGUIDE® who have won the Kairos Prize® and MOVIEGUIDE® awards.