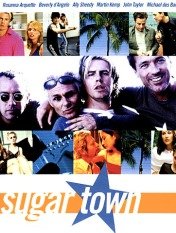 SUGAR TOWN is a slice-of-life look at washed-up 1980s musicians in Southern California trying to re-make it to success. The movie spares no depictions of what desperate measures people will do to achieve their dreams. This mainly pagan movie contains fornication, many obscenities, drug use, and cheating, while providing a moral element of a man rejecting adultery and assuming responsibility for his son.

SUGAR TOWN is a slice-of-life look at washed up 1980s musicians in Southern California trying to make it, or re-make it to success. Directed by Allison Anders, the movie spares no depictions of what desperate measures people will do in order to achieve their dreams.

Twenty-something, pretty Gwen (Jade Gordon) makes a list of how she will make her way to the top, including dating a record producer. She is revealed to be the most despicable character. Gwen moves in with production designer Liz (Ally Sheedy), a woman desperate for a romantic relationship. Gwen steals jewels from Liz and eventually steals her man, producer Burt (Larry Klein).

Burt is trying to resurrect a band of has-been 80s rock stars (played by 80s has-been rock stars) including Clive (Duran Duran’s John Taylor), lothario Nick (musician/author Michael Des Barres) and Jonesy (Spandau Ballet’s Martin Kemp). The other band member is Carl (X’s John Doe) who is raising a pile of children and pigs, while sorting out his drug addict brother’s life and keeping a would-be adulterer at arm’s length. Carl is the cleanest and most moral of the group.

In achieving their dreams, Nick is asked to sleep with a voracious financial backer Jane (Beverly D’Angelo), Clive and his actress wife Eva (Rosanna Arquette) have Clive’s rebellious love-child foisted upon their lives, and Gwen steals, lies, cheats, and even leaves her overdosed songwriter for dead while romancing Burt. With no real conclusion, one can only assume that these tired souls will keep on keeping on in nefarious attempts to regain money, fame or power they once had.

Anyone who has spent any time in rock-and-roll knows that many of its characters are shady, dirty, drugged-up, seeking alternative religions, or worse. This movie does not avoid these tricks of the trade. More negativity is depicted than positive choices, but the story includes a rejection of adultery and a decision to become responsible for one’s own child.

Few lessons are learned, but many who may see this may be glad that they never pursued the cut-throat world of rock-and-roll. The 80s rock stars performed admirably, but of course, they didn’t have to stretch too far for their roles. Supposedly written in eight days, this movie is merely a small blip with very limited appeal.