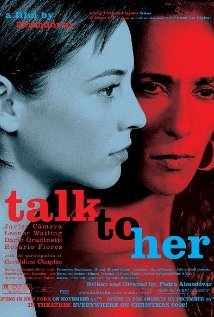 In the Spanish-language, subtitled TALK TO HER, Pedro Almodóvar puts his usually dominant female characters in supporting roles, as he convincingly explores the unusual friendship that develops between two seemingly opposite men: young Benigno, the nurse who tirelessly cares for his comatose lady-love, and forty-something Marco, the travel writer who pursues wild women who live to tempt death. They meet when Marco’s bullfighter girlfriend is gored in the ring and brought to the clinic where Benigno works.

Almodóvar develops his story by seamlessly weaving in flashbacks, and even a made-up scene from an old silent film. The richly drawn characters, fleshed out by wonderful actors who are refreshingly “non-Hollywood,” explore themes of love, loneliness, friendship and devotion. The cinematography is magnificent, and the music is elegant, although American viewers could benefit from subtitles for the vocalists’ lyrics. It is a captivating film. Sadly, Almodóvar concludes the film with an amoral plot line that includes actions that are clearly anti-Christian, and expresses those actions rather matter-of-factly, as he sets up some of his characters for a probable sequel. That plot, coupled with mild violence, nudity, profanity and obscenities, earn the film its well-deserved extreme caution

(AbAbAb, RoRo, LL, V, S, NNN, A, DD, MMM) Anti-Christian worldview with rape and suicide (neither depicted on screen) as well as with Romantic theme as characters are driven by emotions, not logic; six obscenities and five profanities and nurses discuss a man’s crotch; mild portrayal of violence in bullfight; implied fornication; naturalistic nudity of bathing comatose patient, brief flashback to girl running nude, and in-your-face stylized nudity, where “shrunken man” climbs woman’s breasts and “dives” into a giant pseudo-female private part; alcohol use; light smoking and reference to drug use; and, lying and cheating.

In a departure from his role as wry observer of women’s behavior, Pedro Almodóvar, the renowned Spanish filmmaker, has created a study of two men who develop an unlikely friendship, and the roles women play in their lives. TALK TO HER is a highly entertaining movie that exemplifies the power of the medium to make flawed characters sympathetic and likable, and ultimately to minimize the impact of despicable behavior.

In the opening scene, the movie cuts back and forth between the staged version of “Café Müller,”(choreographed by Pina Bausch, whose work is seen often in Almodóvar’s) and the reactions to it of two men sitting in the audience. Benigno, the younger man, is moved not only by the play, but also by the tearful reaction of the stranger sitting next to him. From there, the movie continues to cut back and forth between the tales of the two men’s lives, intertwining them in an unusual friendship.

Benigno is a nurse who cares lovingly and tirelessly for the beautiful Alicia, who is in a clinic, living in a chronic vegetative state. Through flashbacks it is revealed that Benigno had been inspired to train as a nurse by caring for his psychosomatically ill mother, from the time she was 40 years old until her death. He enslaved himself to her care and took courses not only in nursing, but also in hairdressing and manicuring skills, in pursuit of his filial desire to keep her beautiful. Before her death, she asked him what he would do after she was gone, and he said, “Kill myself, I guess.” His mother wisely averred that he should enjoy his life and find something to make life worthwhile.

After her death, he did just that, awkwardly pursing the beautiful Alicia, whom he’d spotted in a neighboring dance studio as he gazed out his apartment window. He went so far as to book an appointment with her psychiatrist father, and when pressured to state his reason for seeking help, he uttered a major theme of the movie: “loneliness.” Shortly thereafter, Alicia was hit by a car and put in his care at the clinic, where he recreated the pathologically devoted relationship he had with his mother.

Marco is a travel writer who becomes involved with the famous bullfighter Lydia, whose renown has stemmed more from her recent romance with fellow bullfighter “El Nino,” than from her own skill, which alone would not carry her in that chauvinist-dominated profession. Scenes of their developing romance are intercut with flashbacks of Marco’s relationship with an under-aged heroin addict. He gave up on her after many years of traveling to exotic places, because the relationship was built on running away– no amount of which could help her overcome her habit. Thereafter, even in Lydia’s presence, he welled up in tears at the sight of any magnificent image, sad that he could not share it with that erstwhile lover. Lydia understandably felt threatened by this “competition.”

Benigno and Marco meet again in the clinic, where Marco is visiting the now-comatose Lydia, who was severely gored in a bullfight. From here, the ironic friendship develops between the confined Benigno, who cares for nearly-dead women, and the wanderlust Marco, who loves only wild women who constantly defy death. Despite their different style, both men pursue women who are emotionally unavailable. Benigno, embodying a traditionally feminine nurturer, ministers to Alicia as if she were fully awake, while the masculine Marco can’t bring himself even to touch Lydia. Benigno instructs him to “talk to her.” Before Lydia dies, Marco comes to her room to discover El Nino, who announces that they had secretly reconciled before her fatal bullfight.

When it is discovered that Alicia is pregnant, Benigno goes to jail. He ultimately commits suicide, unaware that when she delivered her stillborn baby, she miraculously regained consciousness. In a déjà-vu-like scene, Marco, who now rents Benigno’s apartment, gazes out the window and sees Alicia alive and well, taking a physical therapy class in the dance studio. The movie ends where it began, in the theater, where the same dance group is performing another play. Almodóvar leaves open the door for a sequel featuring a relationship between Marco and Alicia, who are in the audience.

TALK TO HER is magnificently filmed in rich, warm tones, and beautiful Spanish songs punctuate important scenes (subtitles for some of the lyrics would have helped.) Almodóvar masterfully uses flashbacks to tell his story and enhances the details of private love stories with the presentation of performance artists who would be more known to Spanish than to American audiences. All of the actors are superb, and succeed in making the deeply flawed characters very compelling and likable. Grandinetti’s (Marco) face is marvelously expressive, and Camara (Benigno) convincingly massages, bathes, and manicures Alicia in long, tender scenes. Watling’s (Alicia) face and body are magnificent, making her beautiful to observe on screen, and an understandable object of Benigno’s affection, but not at all a realistic representation of a woman in a chronic vegetative state. Geraldine Chaplin is exquisite as Alicia’s ballet teacher, although the extent of her role seemed unnecessary to the story. Perhaps, Almodóvar had to make it important enough for her to take the part.

The movie is R-rated because there is full female nudity and rear male nudity, some smoking and drinking, some violence in the bullfight, and a good bit of profanity and obscenity. Contributing heavily to that rating is a scene from an “old” (made for this film) silent movie that is comical, but for this viewer, annoyingly obscene. It is used as a metaphor for Benigno’s impregnation of Alicia, and it is disturbing not only for its uncomfortably graphic nature, but because it serves to soften the magnitude of what this otherwise likeable man had done—committed a rape. This is one of the unnoticed ways that media can powerfully influence viewers.