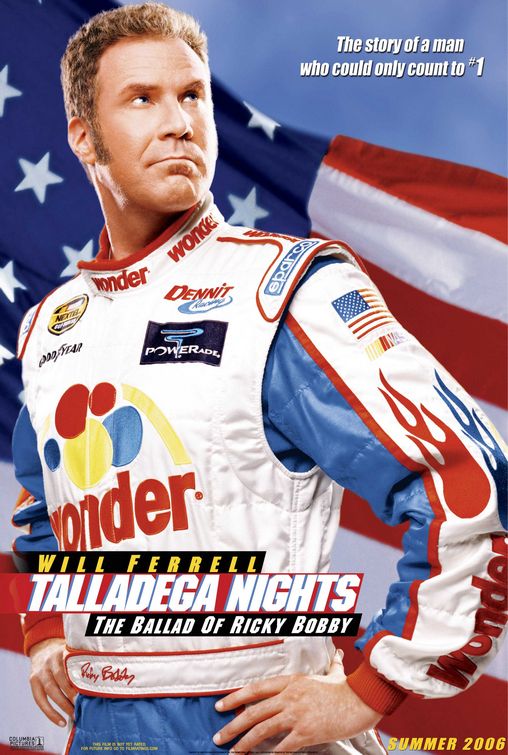 TALLADEGA NIGHTS: THE BALLAD OF RICKY BOBBY stars Will Farrell as Ricky Bobby, a Southern good old white boy whose dope-smoking, white trash father has abandoned him, leaving Ricky with the immortal words, “If you ain’t first, you’re last.” Ricky grows up loving to drive cars fast. He quickly becomes NASCAR’s top stock car driver. When a homosexual French racecar driver challenges Ricky, Ricky drives recklessly to win, but suffers a spectacular crash that makes him afraid of driving. Only the reappearance of Ricky’s long-missing father can help Ricky recover his racing skills so he can challenge his archrival.

TALLADEGA NIGHTS is an unending, politically correct ridicule of the Bible Belt, Southern white men, Christianity, Jesus Christ, the family, and American masculinity. Its constant jokes are either hit or miss, or offensive to a good many people, especially committed Christians. The movie also contains strong sexual references, excessive foul language and strong homosexual content. This truly is one of the most blasphemous, politically correct summer movies ever released by a major studio. Talladega, by the way, is a town in eastern Alabama with a famous NASCAR racetrack, the Talladega Superspeedway.

(HH, PCPCPC, AbAbAb, HoHo, C, B, LLL, VV, SS, N, AA, DD, MMM) Strong humanist worldview with very strong politically correct elements that ridicules white Southern Christian males, the Bible Belt, Jesus Christ, the Nativity Story, Christians, NASCAR, the South, men with Southern accents, and American masculinity while promoting moral relativism, plus movie uses strong pansexual homosexual elements to mock conservative and Christian attitudes toward masculinity in a politically correct way, one slightly positive Christian shot with grandmother singing in church choir with grandsons as part of teaching the children to behave, and false religion where man tries to make a point by saying that God needs the Devil, reflecting a dualistic misunderstanding of reality, theodicy and the Godhead; at least 46 obscenities, one strong profanity, 15 light profanities, one bleeped “f” word, an obscene gesture, blasphemous metaphors about Jesus done for comic effect, stupid man says things like, “Help me, Baby Jesus. Help me, Allah. Help me, Oprah Winfrey,” and brief talk about urinating; strong comic and action violence includes spectacular car crashes, car crashes into house, car sideswipes parked cars, cougar growls at man, implied scratching of man by cougar, man thinks he’s on fire and rolls on the ground, race cars bump one another, driver starts to pull out and hits shopping cart and policeman, man breaks another man’s arm with a loud crack, man stabs himself in the leg to prove he’s paralyzed but he’s not, and boys spray man with hose; several crude sexual references and jokes include it is implied that woman flashes boobs at celebrity, wife leaves husband for husband’s best friend, homosexual men kiss and hold hands, heterosexual man makes up with homosexual archrival and kisses him full on the lips for a long time, passionate kissing, man crudely mentions that he posed for PLAYGIRL, woman gets sexually aroused in a crude way that’s supposed to be funny, and man talks about wanting to dress up as female disco singer Donna Summer; upper male nudity, man strips to underwear in public, and female cleavage; alcohol use and drunkenness; smoking and drug references; and, lying, protagonist is selfish, negative stereotypes of Southern white men with accents, family argues, woman gives birth in car, homosexual man calls his lover “ my husband,” grandmother performs Eastern physical exercise with grandsons, evading police, protagonist’s father abandons his family, and parents are permissive with two boys, who talk dirty and insult their elders.

In the last scene to TALLADEGA NIGHTS: THE BALLAD OF RICKY BOBBY, a satirical comedy starring Will Farrell, a formerly uncouth, now educated boy, praises the “moral ambiguity” in 20th Century American literature. There is nothing morally ambiguous about this movie, however. It’s an unending, politically correct ridicule of the Bible Belt, Southern white men, Christianity, Jesus Christ, the family, and American masculinity. Needless to say, at the Los Angeles screening MOVIEGUIDE® attended, many in the crowd loved it.

TALLADEGA NIGHTS stars Will Farrell as Ricky Bobby, a Southern good old white boy whose dope-smoking, white trash father has abandoned him, leaving Ricky with the immortal words, “If you ain’t first, you’re last.” Ricky grows up loving to drive cars fast, and he quickly becomes NASCAR’s top stock car driver. Ricky also loves to pray to the Baby Jesus at the family dinner table, but it is clear that he, his family and his best friend, Cal, don’t know much about Jesus or His teachings. Their Christian faith is completely mindless and self-serving. The movie tries to milk this for lots of blasphemous and borderline laughs.

One day, a French race car driver, Jean Girard, who also is homosexual, comes to America to challenge Ricky’s supremacy on the racetrack. The mindless, chest-thumping Ricky can’t bear to be shown up by a Frenchy, must less a homosexual. He drives recklessly to beat the Frenchman and ends up having a spectacular crash. The crash sends Ricky into shock and denial. Now that her husband is no longer able to race, Ricky’s wife abandons him for his best friend Cal, who resents Ricky for never helping him win a race. Only the reappearance of Ricky’s long-lost father can help Ricky recover his racing skills so he can challenge his archrival again.

TALLADEGA NIGHTS tries to mine comic territory that was better excavated in HAPPY MADISON, the golf comedy starring Adam Sandler. It doesn’t even try to balance out its satire. So, unless you’re a flaming liberal bigot who wants to make fun of NASCAR, Southerners, Christians, Jesus, and traditional views of American masculinity, or don’t know any better, you won’t find much to laugh at here. Even then, the jokes are hit or miss, with some of them just plain stupid.

TALLADEGA NIGHTS ridicules its conceited, Southern white protagonist. In one excruciatingly long scene, it also ridicules the protagonist and his family and friend for saying an inane dinner prayer to Jesus. This is one of the most blasphemous scenes in recent memory. It goes way beyond mere mockery of Christianity. The movie also ridicules traditional, heterosexual notions of masculinity in America and the South, including NASCAR. Taken altogether, the movie is one long politically correct, humanist attack on the Bible Belt and white Southern Americans. It also contains strong sexual references, excessive foul language and strong homosexual content.

A recent article in the Los Angeles Times reported that both Will Farrell and his writing partner, Adam McKay, the director of this movie, are pretty radical liberals who are angry at the Democratic Party for not being even more antagonistic toward its political rivals. Apparently, that also includes conservative evangelical Christians in the South who support more conservative candidates, especially candidates opposed to same sex marriage and opposed to the promotion of homosexuality and other perverse sex acts. To many such liberals, bigoted attacks on blacks, women, Latinos, and other minorities are evil, but bigoted attacks on white Southern Christian males are fair game. Hopefully, this double standard will be rejected some day. Only then, perhaps, will Hollywood stop making such movies as TALLADEGA NIGHTS.

Talladega, by the way, is a town in Alabama that has one of the most famous NASCAR racetracks, the Talladega Superspeedway.