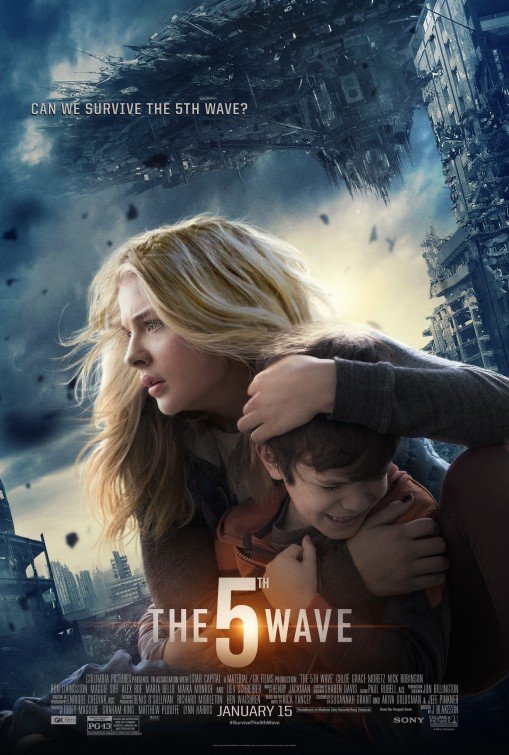 THE 5TH WAVE is a science fiction thriller about Cassie, a high school girl from Ohio who must deal with a world devastated by an alien invasion. After several days of mysterious peace, the aliens, tagged as “The Others” by humans, unleash a series of devastating attacks on humanity in unusual ways. They wipe out all electricity, running water and modern life’s amenities with an electromagnetic pulse, then unleash floods and tsunamis around the world. Finally, they make birds throughout the world attack and infect humans with a deadly bird flu. Eventually, Cassie must rescue her younger brother and other children from the aliens.

THE 5TH WAVE is exciting, extremely well shot and well acted. Chloe Grace Moretz turns in a compelling performance as the female hero. Also, THE 5TH WAVE has a strong moral worldview that instills hope while fighting evil. However, some of the effects are obviously fake, and the last third drags. Also, there’s some foul language, brief politically correct environmentalist content, intense violence, and some immoral teenage rebellion. So, MOVIEGUIDE® advises extreme caution for THE 5TH WAVE.

(BB, Pa, PC, E, C, AP, PP, ACAC, LL, VV, S, AA, M) Strong moral worldview about fighting aliens who want to oppress and destroy all humans with a final positive comment about hope, mitigated by some immoral pagan content (some of it involving teenagers), a couple politically correct, environmentalist comments about human beings wiping out other species on Earth, a reference to a Christian character who accidentally was shot dead, and there’s regret about this, and, at first, the American military in the movie seem rather ruthless, but there’s a twist that reveals this isn’t truly the case, plus strong American, anti-totalitarian elements where the good guys are fighting for liberty against alien tyranny; 14 obscenities (including two “f” words) and three profanities; strong, intense, sometimes scary violence includes teenage protagonist shot in leg and has to have bullet pulled out, people run away in fear and sometimes in pain, teenage heroine in peril numerous times, heroine accidentally shoots to death man who turns out to be harmless, machine gun fire kills people, and people fire back, images of dead people, a huge series of water waves wipe out entire cities and crowds of people and rush toward heroine and her younger brother at one point, scary swarms of birds form, teenage boy is manipulated into pushing a button that supposedly kills an alien parasite inside a human boy but winds up really killing the innocent boy, children and teenagers, trained to kill people they think are really aliens in human form, gun battles, explosions; implied fornication between heroine and teenage boy after they start kissing, a couple jokes about sex, and brief talking about having end-of-the-world fornication; no nudity; teenage alcohol use; no smoking or drugs; and, youths are brainwashed, deception and manipulation.

THE 5TH WAVE is a science fiction thriller about a high school girl who desperately searches for her younger brother against tremendously dangerous odds after an alien invasion decimates much of earth. THE 5TH WAVE is an exciting movie with a strong moral worldview along with some patriotic elements opposing tyranny, but it’s marred by some foul language, violence, a couple politically correct lines, and implied teenage sex.

The movie opens on a teenage girl named Cassie (Chloe Grace Moretz) in Ohio, who is seen carrying a gun in the opening moments to protect herself amid a largely abandoned and devastated world. She feels forced to shoot a man in self-defense, before she finds out he was innocent.

This sets off the beginning of a thriller aimed at teenagers in a similar vein to the HUNGER GAMES and DIVERGENT series, but which feels even more intense than those movies at times because the movie largely takes place in a recognizable present day gone terribly wrong. Cassie describes her normal, happy life, which is disrupted suddenly when a giant alien spaceship appears in the earth’s atmosphere and winds up stopping over her area in Ohio.

After several days of mysterious peace, the aliens – tagged as “The Others” by humans – unleash a series of devastating attacks on humanity in unusual ways. They wipe out all electricity, running water and much of modern life’s amenities with an electromagnetic pulse, then unleash floods and tsunamis around the world while making birds all over the world attack and infect humans with a deadly bird flu.

Just as Cassie, her father and younger brother think they’re safe in a refugee camp, several tanks and school buses show up to take children away to supposed safety from an “imminent attack” by the Others. Then, the parents are told that The Others are blending in with humanity, and there’s no way to know which adults are humans and which are in fact aliens now.

After a horrible melee erupts between a protesting parent and the military figures, a huge gunfight breaks out that’s largely unseen but leaves Cassie’s dad dead. When she gets separated from her little brother in the commotion, she sets off on foot with a gun her dad gave her to make it to the military base where her brother is being held with the other children.

Along the way, Cassie is shot and winds up saved by a man named Evan (Alex Roe). Evan tells her what’s really happening with the children. Thus begins a final quest to save the children and the remaining humans.

THE 5TH WAVE is extremely well shot and well acted, particularly by Moretz, one of Hollywood’s most intriguing young actresses. The pacing is terrific. In fact, through much of the movie, Director J Blakeson creates an incredible level of tension that sometimes makes this movie even more riveting than even THE HUNGER GAMES and certainly the DIVERGENT and MAZE RUNNER movies.

The story’s setup puts viewers right at the start of the problem that devastates humanity rather than explaining history as an afterthought. That helps bring a greater level of fear and tension to the movie. In fact, the intensity of the action is so strong that it almost makes this only appropriate for adults despite the PG-13 rating and teenage target audience.

Sadly, some of the CGI effects are so obviously fake, especially in the wave scenes. Also, the last third drags on forever while also revealing a somewhat unbelievable, if not ludicrous, final plot twist.

THE 5TH WAVE is clearly trying to be an allegory for the evils of totalitarian, government tyranny, as seen in the example of the brainwashing of children. However, a couple lines of dialogue insert a some politically correct environmentalist attitude by mentioning how humans wiped out other species on the planet, so it’s only fitting that the aliens now want to wipe out humanity while preserving as much of the planet’s resources as possible. The movie also contains an implied bedroom scene between the heroine and a teenage boy. That said, the movie ends on a hopeful note as the fight against the evil aliens continues, probably in a sequel.

Thus, while THE 5TH WAVE is an effective, generally uplifting thriller for much of its running time, it could be better and includes some foul language and other content requiring an extreme caution.