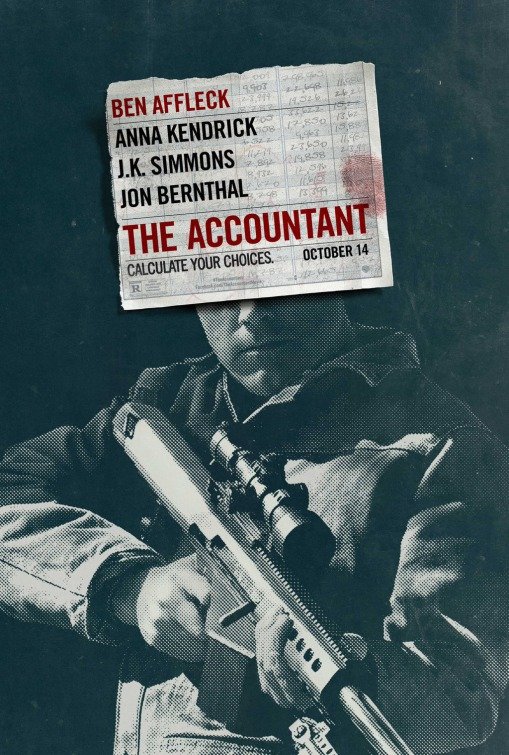 THE ACCOUNTANT stars Ben Affleck as Christian Wolff, a freelance forensic accountant, who’s also worked in the military and has a form of autism. Wolff is a mathematical genius who works for criminal organizations but sometimes rats them out to law enforcement when he feels they’ve crossed some line. To take the heat off, Wolff’s mysterious handler, a computerized voice over his smart phone, advises him to accept a regular client. However, someone in the company decides to clean up their embezzlement by killing Wolff, the female junior accountant helping him and anyone else involved. Meanwhile, two Treasury agents are hot on Wolff’s trail.

THE ACCOUNTANT turns out to be a complex morality tale and poignant but violent crime thriller. It sometimes plays like a riveting character study. As such, it’s extremely entertaining and has a touching, uplifting ending. The acting, directing and writing are all top notch. Protecting innocent life, charity and compassionate treatment of autistic children are extolled. However, there’s also a lot of foul language, very strong and intense violence, and some moral ambiguity. So, MOVIEGUIDE® advises extreme caution.

(BB, PP, Pa, FR, LLL, VVV, N, A, MM) Strong moral worldview includes a compassionate look at the treatment of autistic children and includes protecting innocent lives and a positive patriotic view of the American military and professional law enforcement officials, mitigated by some immoral pagan, antinomian elements such as a scene of violent revenge and some brief encouragement of the idea that the ends justifies the means; at least 38 obscenities (including about 25 “f words), four strong profanities (including lawman says, “Jesus, Mary and Joseph”), three light profanities, and an obscene gesture from boy angry at his mother for leaving the family for good because of a huge disagreement with the father; some very strong and strong action violence with light blood and very occasional blood splatter includes pointblank shootings, martial arts fighting to the death between men, a couple bad guys are slammed into very hard objects, a man in a hoodie appears to slit the throats of a couple bad guys (though no blood actually shown), man threatens to shoot another man in the head, several loud gun battles, a couple other murderous threats, martial arts instructor fights off two young boys in a training session and their father tells the man to keep going when he tries to tell father they’ve had enough, autistic man goes crazy at one point and beats his lower leg with a stick after he’s prevented from finishing some work he was doing, it’s implied that some gangsters have tortured a man strapped to a chair to death, and later his dead body has some burns on it, but the camera doesn’t linger (movie does show a nail being driven mechanically into victim’s hand with a scream of course); no sex although it looks like the protagonist might kiss the main female character; upper male nudity; brief alcohol use; no smoking or non-medicinal drugs; and, a scene of violent revenge against some bad guys, some vigilante justice, protagonist works as a freelance forensic accountant for criminal organizations, some moral relativism, autistic man takes a pill nightly for his condition, woman says she played blackjack one time and put a nickel in a slot machine one time.

THE ACCOUNTANT is a very entertaining thriller about a mathematical genius suffering from autism who’s a freelance accountant for criminal organizations, but who takes on a legitimate job that turns out to be more dangerous than even he imagined. THE ACCOUNTANT has many exciting twists and turns along with some impressive acting and emotional depth, and uplifting moments, but it’s set in a dark world containing some moral ambiguity and includes plenty of foul language and some brutal gun violence.

The movie opens with an unknown man entering a building where a gunfight appears to be happening. As his shadow turns a corner, another shadow seems to confront him. (The specific details of this scene’s background are eventually revealed later in the movie, in a captivating, enlightening way that enhances THE ACCOUNTANT’s story and characters.)

Cut to 1989 where two parents are consulting with a head counselor about their young autistic son, who’s trying to finish a jigsaw puzzle upside down while his brother watches. The father is a military man and disagrees with the counselor who wants the boy to stay at his counseling center so the counselor can work with him. The father believes he needs to toughen up the boy, however, to prepare him for a world that can be cruel to people who are different.

Suddenly, the autistic boy starts screaming when the final piece falls on the floor and he can’t find it. A little autistic girl in the room finds it for him, and he finishes the puzzle after she smiles and hands it to him. The camera moves under the glass table to reveal that the jigsaw puzzle is the famous photo where Mohammad Ali stands victoriously above an unconscious Sonny Listen in their 1965 heavyweight bout, their second.

Cut to present day. The autistic boy has grown up to be a quiet accountant named Christian Wolff, played by Ben Affleck. Working in his small, strip mall office outside Chicago, Wolff is helping a middle-aged farmer and his wife with their taxes. They might have to borrow some money to pay for their tax bill, but Wolff realizes the wife has a jewelry-making hobby that can be turned into some business write offs for them. The woman is skeptical at first, but Wolf awkwardly convinces her. As they shake hands later, the farmer invites Wolff to come fishing on his farm, which has a nice lake. Wolff, however, tells the farmer his only hobby is shooting for target practice. Come and shoot at the farm then, the farmer says. Wolff says okay, why not.

Cut to the criminal investigations division of the Treasury Department. Ray King, the crusty division head, blackmails a young African American woman, Marybeth Medina, into working for him because she lied on her application about a couple felonies she committed as a juvenile. King shows Medina videos of Chris Wolff talking with heads of several criminal organizations. King tells Medina he doesn’t know the identity of the man talking to the bad guys, but that he’s known as “The Accountant.” He wants her to investigate and find out who The Accountant is so they can bring him to justice and maybe force him to reveal what he knows about these criminal investigations.

Meanwhile, Wolff’s handler, a mysterious computerized voice over his smart phone, has decided that working with all these criminal organizations has brought too much attention to him. So, the handler tells Wolff to take a break and do a regular freelance job with a robotics company, which works for the Defense Dept. and also works on developing prosthetic limbs for people, including soldiers and first responders. A junior accountant at the firm, Dana Cummings, has found a multi-million dollar mistake on the company’s books. The company’s founder, played by John Lithgow, hires Wolff to investigate. After talking with the company’s CFO, who happens to be the company head’s best friend, Wolff decides to look at all the books the CFO ever managed for his friend.

As Wolff takes a super-methodical look at the books, he establishes an awkward rapport with Dana. Also, three other quick flashbacks reveal what happened to him and his brother when their mother left the family, and their father started training them in self-defense.

Eventually, a team of mysterious assassins forces the robotics firm’s CFO to commit accidental suicide with his insulin medicine. The robotics firm’s founder immediately halts Wolff’s investigation, and two of the assassins show up at his former client’s farm to kill Wolff while he’s out practicing with his high-powered rifle. Wolff expertly dispatches the two assassins but realizes their team will also target Dana. Against his handler’s advice, Wolff decides to go immediately to Dana’s apartment to protect her. He does so, and his fighting skills show that there’s more to this mild mannered, quirky “Accountant” than meets the eye.

Meanwhile, Agents King and Medina close in on the Accountant’s identity, and King shows Medina that there’s more to his own story than he first told her.

A team of veteran actors and stuntmen, along with some superb direction and screenwriting brings THE ACCOUNTANT to life. The movie’s twists and turns don’t just apply to its plot. They also involve the movie’s character development, which becomes one of the great joys of watching this movie unfold. In fact, the mix of all these elements is one of the more amazing, more pleasing blends in recent movie history. Also, the ending provides viewers with a couple uplifting moments and revelations that give the movie a very satisfying, even heartfelt conclusion.

Thus, despite the movie’s intense gun battles and martial arts fighting, and the protagonist’s chosen profession, THE ACCOUNTANT has some strong moral, uplifting elements. Several times, the protagonist goes out of his way to use his fighting skills to protect innocent lives. Later in the movie [SPOILERS FOLLOW], it’s revealed he uses much of his money, both ill-gotten and not ill-gotten, to help fund treatment for younger autistic children.

That said, the movie has a positive, patriotic view of local, state and federal law enforcement. Also, the American farmer and his wife are portrayed as good people who are humorously surprised when they learn about their accountant’s fighting skills. At one point, the movie reveals that he got some of those skills, and even used his accounting skills, helping his country fight international Islamic terrorists. How the accountant went from that to working for criminal organizations makes for an interesting, captivating story.

The movie’s flashbacks don’t slow down the plot but instead reveal profound, unique nuances of the characters, including their complex motivations, both moral and immoral. For example, in an early flashback, the autistic protagonist’s brother gives their mother the finger because she’s decided to leave the family because of her disagreement with their father about how to raise their autistic son. This scene provides some important background information to an emotional disagreement between the brothers over their individual, contrasting attitudes toward their mother. A couple other flashbacks about how the protagonist became a freelance forensic accountant for criminal organizations, and how the Treasury official became aware of the Accountant’s activities reveal some important details about the protagonist and the Treasury official’s motivations and character traits. Finally, the junior female accountant tells a story to the accountant about a prom dress that leads to a couple touching moments between them.

Spiritually speaking, though, THE ACCOUNTANT doesn’t contain any specific religious themes. It also has lots of foul language and some brutal gun violence and fighting. So, for these and other reasons, extreme caution is advised.

Ultimately, THE ACCOUNTANT turns out to be a complex morality tale and poignant but violent crime thriller that sometimes plays like a riveting character study. The protagonist’s name, Christian Wolff, expresses the ambiguous nature of his moral and professional code and his complex childhood and personality disorder that formed his dualistic character. He sometimes anonymously informs on the criminals for whom he’s worked when he feels they’ve crossed a line. However, he’s not above taking some revenge or meting out some vigilante justice.