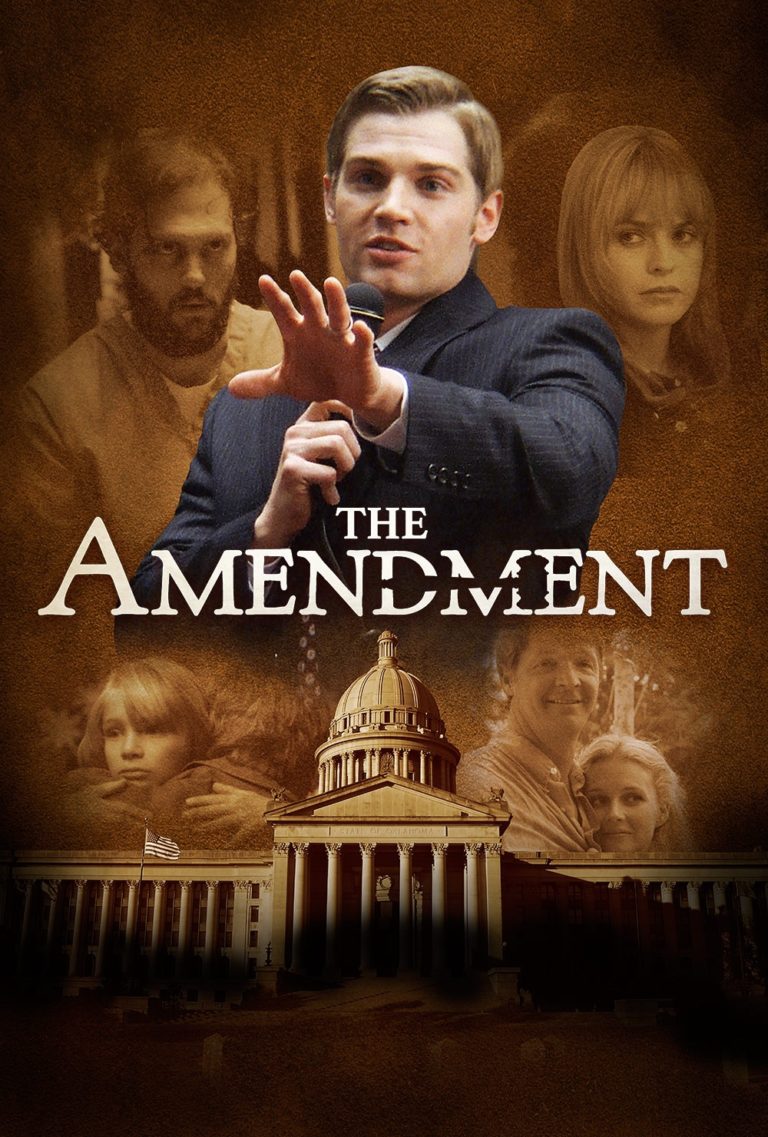 THE AMENDMENT is screenwriter Brooks Douglass’ semi-autobiographical retelling of the aftermath of a brutal rape-and-murder committed in 1979. The movie follows Brooks Douglass himself when he was a young state senator from Oklahoma. Brooks is preparing to witness the execution of one of the men who murdered his parents and raped his sister Leslie when Brooks was a teenager. Brooks’ parents were missionaries and his father a pastor. The lessons Brooks learned from his parents about Christian love and forgiveness are tried and tested when Brooks finally confronts one of the murderers.

Douglass has written a compelling screenplay about a very tough issue. He treats the re-enactment of the brutal crime with caution and grace, while simultaneously refusing to pull any punches. A strong ensemble cast helps the script along. Especially good performances include Taryn Manning as Leslie Douglass and the real Brooks Douglass playing his father. The movie has a distinctly Christian structure. In fact, the main conflict is whether Brooks can accept Christ’s challenge to forgive his enemies. Discussions of the crime make THE AMENDMENT inappropriate for younger, sensitive children.

(CCC, BBB, VV, S, N, AA, DD, M):
Dominant Worldview and Other Worldview Content/Elements:
Very strong Christian, biblical, moral worldview where faith in Jesus Christ is celebrated and seen as the source of human wisdom, forgiveness is extolled, and reading the Bible and prayer are important to the characters;
Foul Language:
No foul language
Violence:
Some reenactments of a brutal crime, with characters being murdered and implied rape, some fist fighting, some reenactments of military training including fighting and training in firearms, and an implied state execution;
Sex:
Implied and described rape;
Nudity:
Occasionally shirtless young boys;
Alcohol Use:
One scene takes place in a restaurant/bar, so there are several images of glasses of wine/other alcohol, and some discussions about someone being drunk;
Smoking and/or Drug Use and Abuse:
One mention of being high on speed; and,
Miscellaneous Immorality:
The central crime is a robbery-turned-rape-and-murder and there’s a joke between a father and son about lying to the mother.

As a rule, stories about forgiveness are hard to make interesting. The main conflict whether to forgive or not is almost entirely internal, existing only in the mind of the protagonist. Screenwriters and directors have to work especially hard to find ways to externalize this internal conflict. Actors may have the hardest job, as they need to find interesting and subtle ways to play anger, defeat and, finally, forgiveness.

In THE AMENDMENT, Director Paul Brown and Screenwriter Brooks Douglass take on that challenge, striving to put on screen a story of pain and forgiveness.

It helps that THE AMENDMENT is based on a true story. In fact, it’s based on Douglass’ own story. In 1979, he and his sister Leslie were teenagers when they survived a brutal robbery-turned-rape-and-murder which left their parents dead. The movie follows Brooks as a young man, now a state senator trying to pass a new amendment to protect victims of crimes. Simultaneously, he and Leslie are preparing to witness the execution of one of their parents’ murderers.

As a screenwriter, Douglass should be commended for several things:

For being willing to share this story with the world. It is clearly a deeply personal story about the pain of what he and his sister experienced.

For writing an honest autobiographical story where he isn’t blameless. It is very hard to write a story about yourself and be honest about your flaws. Yet, Douglass’ younger self, Brooks, is an angry, flawed, complicated person, who needs help to overcome his past trauma.

For letting the story be about Christ saving him, and not him saving someone else. Brooks is not the hero of this story; Christ is. Douglass is very clear in his writing that the crucial decision in the story to forgive or not to forgive is all about Christ and not about himself.

For treating the crime with caution and grace. Douglass (and Director Paul Brown along with him) does not sensationalize what happened, or turn his movie into a gory, terrifying film about a horrible crime. However, he also refuses to pull any punches and is clear about the lasting impacts of this gruesome deed.

The movie has many other highlights, including a strong ensemble cast that really brings this true story to life. Taryn Manning is especially moving as Leslie Douglass. And, in a beautiful tribute, the real Brooks Douglass plays his father, Richard Douglass.

Because of the nature of the story, there is some mature content. Rape and murder are implied, and then described in frank but guarded terms. One of the central plot devices is that a murderer is going to be executed, and the central character (Brooks Douglass) is trying desperately to make sure the execution happens.

Despite its dealing with hard issues, THE AMENDMENT is an unashamedly Christian movie. The core conflict is whether Brooks can embrace the forgiveness of Jesus Christ and choose to extend that forgiveness to his parents’ murderers. Brooks’ parents were missionaries, and some of the film follows their life as a missionary family in Brazil. In much of these flashback scenes, we see Brooks’ father teach him deeply Christian lessons about grace, gentleness, love, and sacrifice. Sermons, prayers and reading the Bible are all highlighted and celebrated parts of Christian life.

The references to and depiction of a brutal crime makes THE AMENDMENT inappropriate for young viewers. However, adults and teenagers will find it a beautiful story about Christ’s love and forgiveness, even in the darkest of situations.

Rent or Buy THE AMENDMENT:

Audience: Adults and teenagers (not appropriate for children)