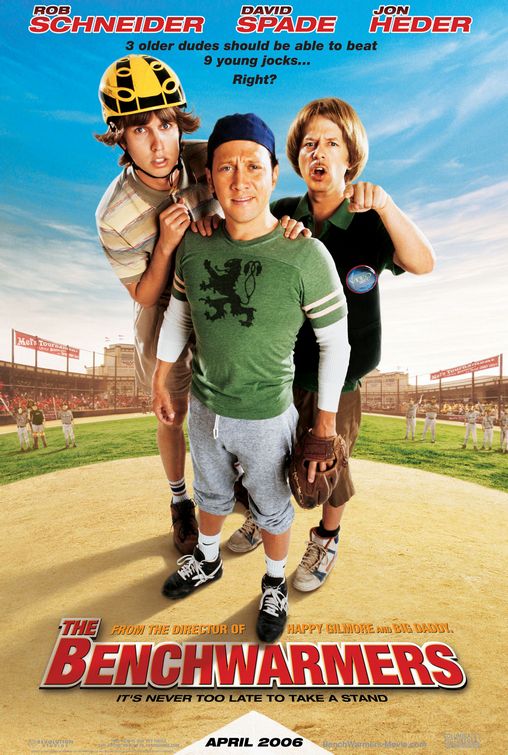 THE BENCHWARMERS stars Rob Schneider as Gus Matthews, who owns a small gardening business. Gus defends a boy, Nelson, being bullied by Little Leaguers on a baseball field. The experience awakens Gus's love for baseball. He gets his two nerdy adult friends, Richie and Clark, played by David Spade and Jon Heder, respectively, to join him at the field to hit a few balls. While they're playing, the Little League team appears. Gus challenges them to a game, and it turns out that Gus has excellent hitting and pitching skills, and his team wins! Nelson's billionaire father, Mel, learns about this feat. He proposes a tournament against the Little League, with the winning team getting a professional baseball field built with Mel's money.

The athletic hijinks in THE BENCHWARMERS are funny and clean. Schneider, Spade, Heder, and Jon Lovitz do a good job of getting laughs. The movie also contains a strong moral message about the evils of bullies. These positive elements, however, are laced with some scatological humor. THE BENCHWARMERS also contains jokes about homosexuality and dwarves. Thus, MOVIEGUIDE(r) advises extreme caution. THE BENCHWARMERS is not a movie for media-wise moviegoers.

(PaPa, BB, C, HoHo, PC, LL, V, S, N, AA, M) Mixed strong pagan worldview with some scatological humor and strong moral premise about the evils of bullying other people, plus Christian, redemptive elements where bullies and their victims make amends through forgiveness and strong homosexual references where some of the villains are homosexual characters or become homosexual and one protagonist makes jokes in one scene about renting videos containing lesbian scenes, plus reconciliation scenes at the end contain a light, implied politically correct tone that welcomes homosexuals; 20 obscenities, one strong profanity, two light profanities, man picks his nose and eats it, boys pass gas in another’s face twice, vomiting in one scene, man afraid of sunlight squirts sunblock into his mouth several times, boy has animal manure on his cheek, and man says he’s ruined inside of port-a-potty; some slapstick violence such as rock hits man in groin, man hits himself in the head a lot while swinging baseball bat, bats fly out of man’s hand and hit car and animals, men gang up on man after bat hits expensive car, and jokes made about male bullies twisting other males nipples and villains are shown twisting each other after they lose; some sexual innuendo such as woman talks about her fertility with husband, jokes made about two villains who seem to be homosexual lovers, another man seen holding hands with man in restaurant, kissing, man calls another man “Fairy Jerry,” and video salesman tries to get female customer to rent video with two lesbian sex scenes; upper male nudity and nude woman behind shower door that obscures the view; men drink beer and man gives alcohol to ringer, who then gets drunk; and, lying, brief cheating, boy takes revenge on bully, villains bring in ringer during baseball game, boys pull down man’s pants so he can’t run bases so man pulls down a boy’s pants so he can round third safely, hero makes a reference to “bad karma,” and man says, “I want a little man too” when he sees hero befriend an adult dwarf and lift the dwarf in his arms.

THE BENCHWARMERS is another comedy production from Adam Sandler and his friend Rob Schneider (DEUCE BIGELOW), who stars in the movie. Unlike their other projects, the movie is pretty funny when its content is clean or relatively clean, but it contains some scatological humor, foul language, and off-color jokes about homosexual behavior and dwarves. All of these bad elements could easily have been eliminated.

Schneider plays Gus Matthews, the owner of a gardening company who defends a boy, Nelson, being bullied by a team of Little Leaguers on a baseball field. The experience awakens Gus’s love for baseball, and he gets his two nerdy adult friends, Richie and Clark, played by David Spade and Jon Heder, respectively, to join him at the field to hit a few balls. Richie and Clark have no athletic skills whatsoever, but Gus can hit the ball out of the park.

While they’re playing on the field, the Little League team shows up, demanding to have the field. Gus notices their coach isn’t with them. He refuses to give them the field and challenges the team to a game. When the lead bully says Gus only has three players, Gus retorts that it should be easy for the bully’s team to beat them, then. Gus turns out to have strong pitching skills as well, and they easily beat the Little League team with Gus striking the boys out and Gus hitting home runs nearly every inning.

Nelson’s billionaire father, Mel, played by Jon Lovitz, hears about what Gus and his two friends did. He tells them he used to be a nerd who was bullied, but got his revenge by becoming vastly wealthy. Mel proposes that Gus and his friends challenge all the major Little League teams in the state to a tournament, to give hope to all the bullied nerds and benchwarmers who never got a chance to play baseball. The prize will be a professional-size baseball field that Mel will build with his own money.

The buzz builds as Gus, Richie and Clark win the games. Nerds and benchwarmers everywhere start listening on the Internet to a play-by-play visual account of the games broadcast by a computer-savvy boy and girl. Gus has a secret, however, that threatens to destroy everything.

The athletic hijinks in THE BENCHWARMERS are funny and relatively clean. Schneider, Spade, Heder, and Lovitz do a good job of getting plenty of good laughs. The movie also contains a strong moral message about relieving the pain that bullies can cause, as well as a message about the importance of asking forgiveness from other people you have harmed.

These positive elements, however, are laced with scatological humor and foul language. There are also some jokes about dwarves that people may find offensive. Finally, the movie strongly implies that two of the villainous coaches are homosexual. At one point, another coach hires an alcoholic ringer from the Dominican Republic, who is sad because his wife left him. Later, in a scene where the bullies have reconciled with the nerds, there is a shot of this man holding hands at the Pizza Hut with another man. Thus, although in the rest of the movie some of the villains are homosexuals, there is a light tone of implied political correctness to this scene. It’s the so-called politics of “inclusiveness,” where homosexuals can become part of multicultural America. Anything that excludes homosexual activity is considered mean.

Thus, MOVIEGUIDE(r) gives THE BENCHWARMERS an extreme caution. This movie is not for children, even though, judging by the audience of parents and children at the screening we attended, the movie will attract children and is perhaps being marketed to children.