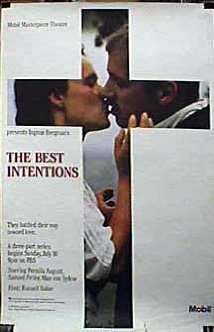 Swedish filmmaker Ingmar Bergman wrote THE BEST INTENTIONS, winner of the Palme d'Or at the 1992 Cannes Film Festival, and left the directing of this breathtaking portrait of his parents to his friend Bille August. The film does contain fornication and upper female nudity though it could be argued that therein Bergman's parents sow the seeds of their future quarrels and misunderstandings.

(C, B, Ab, L, SSS, NN, V) A historical drama focused on a Christian worldview complete with biblical morality and some anti-Christian characterizations as well as: a couple of minor obscenities; some fairly graphic fornication scenes; upper female nudity; and, minor violence as men fight & a man strikes a woman.

Swedish filmmaker Ingmar Bergman wrote THE BEST INTENTIONS, winner of the Palme d’Or at the 1992 Cannes Film Festival, and left the directing to Bille August. The film explores the relationships between Bergman’s parents. His father, Henrik Bergman, a poor theology student, meets Anna, a rich young woman at the University of Uppsala (Later, Anna reminds her husband she married beneath her station). Bergman divides the film in thirds: the stormy courtship and wedding in the cathedral; the rigorous parish life in northern Sweden with its poetic images of nature; and, the turbulent marriage vignettes and family quarrels.

Bergman’s concern with man’s search for God and the frequent triumph of evil emerge in this film, but overall, his personal portrait of Anna and Henrik is breathtaking. Their emotional relationship is a study of the entire spectrum of emotions. THE BEST INTENTIONS does contain fornication and upper female nudity though it could be argued that therein Henrik and Anna sow the seeds of their future quarrels and misunderstandings. However, the film’s overall high quality in every way demonstrates why it received the coveted Palme d’Or at Cannes in 1992.

Rating: Swedish film. Not rated by the MPAA.