THE BOOK OF HENRY

"Am I My Brother’s Keeper?" 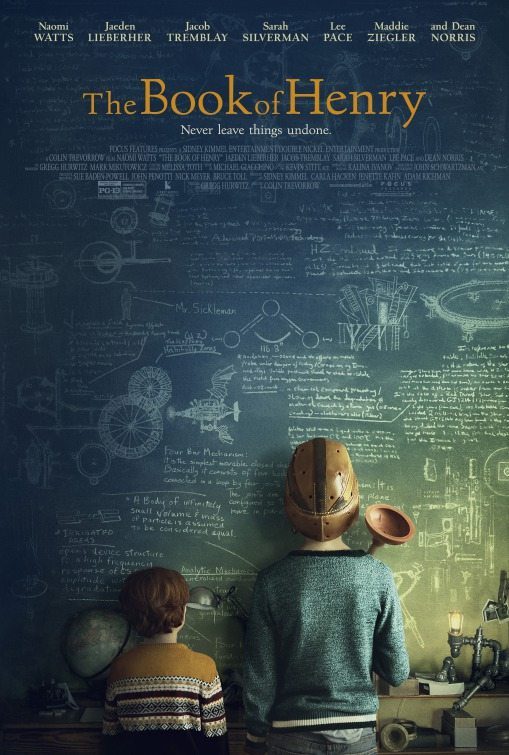 THE BOOK OF HENRY follows the lives of Susan and her two sons, Henry and Peter. Struggling to provide stability, Susan tries to love her sons to the best of her ability. Henry, a genius and mature beyond his years, tries to help his mother put her life back together. As he helps his mother and brother, Henry learns that his friend, Christina, is being abused by her stepfather. Determined to let his legacy in life be defined by how he treats those he meets, Henry moves to act.

THE BOOK OF HENRY offers high quality production and artistic value. The story is both entertaining and engaging. Spiritually and morally, THE BOOK OF HENRY is complex and controversial. It seeks to answer evil in the world without reference to God or faith. It looks at complex moral issues through the eyes of a child as well as adults. How a person responds to injustice lies at the story’s foundation. However, some foul language, adult themes about child abuse and death, and minor graphic content all warrant extreme caution for THE BOOK OF HENRY.

(BB, Pa, LL, VV, S, AA, MM) Strong moral worldview based on the principles of friendship, family, love, and responsibility, response to right and wrong, proper response to abuse, mixed with some pagan elements including facing death without any reference to God plus contemplation of vigilante justice; 11 obscenities (including one “f” word), five strong profanities, seven light profanities; video game violence in the form of first person shooter with graphic head shots and blood spatter in the video game, target practice with a high powered rifle, detailed planning to kill a villain, implied child abuse, fight between children, pushing a child’s face in a peanut butter sandwich, tripping a child walking on the bus; implied sexual abuse, mother kisses her son and a reference to breasts; no actual or explicit nudity but images of female cleavage; mother and best friend get drunk off wine in the living room while children are home, mom and friend drink at friend’s house outside, references to alcohol addiction problems for the family friend; and, bullying, dysfunctional families, and mother jokingly tells her son to gamble.

What is your legacy?

This is the question that opens THE BOOK OF HENRY. It’s a question written on the chalkboard in Henry’s classroom. As various students give standard answers, Henry shows his true genius as he talks about a person’s true legacy being what they leave behind to those that knew them. That is, life’s meaning is found in and through relationships. From this, THE BOOK OF HENRY plays out this moral premise through the story of Henry’s family and the girl next door, Christina.

Both Henry and Christina live in broken homes with a single parent. Henry has a younger brother, Peter, and his mother, Susan, while Christina is alone with her stepfather. The deeper into the story, the darker the themes become as Henry’s childhood is further shattered by events which happen to Christina. Surrounded by a mother who has yet to come to terms with the departure of her ex, Henry must grow up faster than most, by being his Mother’s confidant and support. It parallels the journey of his friend, Christina, who must traverse darker passages out of childhood. THE BOOK OF HENRY answers the question, “Am I my brother’s keeper?”

The cinematography of THE BOOK OF HENRY is exquisite. The light dances with shadows conveying the moral struggle of each character trying to live and find meaning in the world. The acting is superb. Each performance breathes life into the characters in a way that captures the imagination. The score undergirds the movie’s emotional center, offering a space for the melodic reflection of each scene. Composer Michael Giacchino captures the highs and lows of the story and characters in an ephemeral way. His music offers a richness of experience that helps tell a story that reminds you of who you want to be.

THE BOOK OF HENRY deals with morally complex issues. While it does so through the eyes of children, it is none the less not a story for children. The lives of every major character are tinged with brokenness. The world of the children is one where families are separated either by death or choice. The movie presents unhealthy relationships with parents. There is exploration in the inappropriately close relationship between Henry and his mother, Susan. Susan suffers from the emotional wounds of being left to raise two children by herself. This causes her to rely on her genius son to help her make decisions, which causes Henry to place undue pressure on himself. Ultimately, it leads to the neglect of his own wellbeing. This situation also provides opportunity to highlight the strengths and weaknesses of selflessness. Henry is selfless in his relationship with his mother and brother. He acts this way out of the deep love he has for both. Susan, as dysfunctional as she is in her reliance on Henry, loves her children in ways that mothers should.

In Christina’s case, however, the situation is much darker. She’s trapped in a house alone with a man who is powerful and broken. She wrestles with the darkness of abuse. While none of the abuse is portrayed on screen, the effects can be seen in Christina’s face with every appearance afterwards. At first, she believes she’s is alone. However, unbeknownst to her, Henry witnesses her atrocity and chooses to act. Other causes for concern in the movie are several uses of language, depictions of drinking to access, violence via a first person shooter, and the planning of murder.

For a movie loaded with moral quandaries, there is very little reference to God. Visually and narratively, belief in God and faith are sidelined to the subtext latent in the life situations portrayed in the movie. The question of where God is while not explicit quietly rings out in the mind of the viewer. How can such evil exist in the world? Why do bad things happen to the innocent? What is the proper response? All of these are questions raised in the movie which create the space for exploring the divine presence in the world. In short, this story about a mom, sons, and the girl next door presents the antidote for the sickness of apathy.