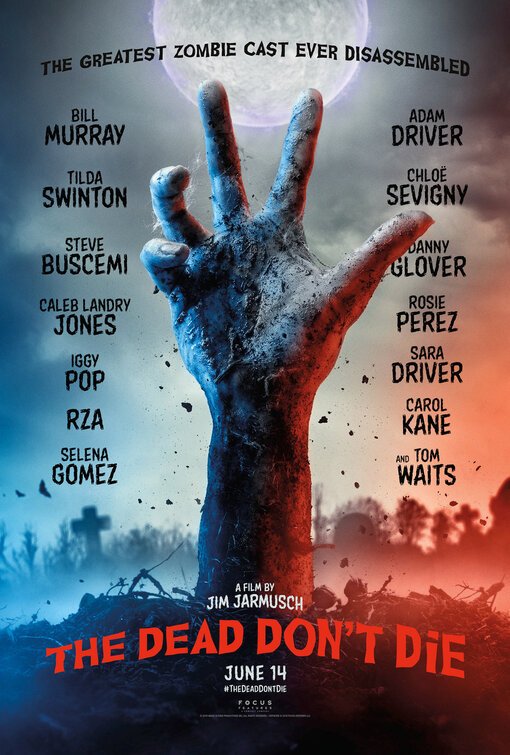 THE DEAD DON’T DIE is a droll horror comedy starring Bill Murray as Cliff Robertson, the sheriff of a small town between Cleveland and Pittsburgh. Cliff and his two deputies, Ronnie and Mindy, are the town’s main defense when the zombie apocalypse begins. News reports suggest the zombies are walking around because oil fracking in the Arctic has thrown the Earth off its axis. The police get help from the new Scottish owner of the local funeral parlor, Zelda, who wields a mean samurai sword.

THE DEAD DON’T DIE is fairly funny, in a dry sort of way. However, sometimes the humor undercuts the suspense and jeopardy. THE DEAD DON’T DIE would also be more entertaining if it didn’t have such a depressing ending. The ending isn’t only depressing. It also has an annoying politically correct message attacking America’s consumer society, capitalism and materialist greed. The movie also has a strong environmentalist message against fracking for oil and gas. Finally, a couple appeals to God for help aren’t answered, and there’s lots of strong foul language and extreme violence in THE DEAD DON’T DIE.

(RoRoRo, PCPCPC, AcapAcapAcap, APAP, P, EEE, B, C, LLL, VVV, M):
Dominant Worldview and Other Worldview Content/Elements:
Very strong Romantic, politically correct critique of capitalism, greed and America’s consumer society, President Trump and his supporters are mocked when a racist man is shown wearing a red cap saying, “Make America White Again,” slightly mitigated by a positive depiction of law enforcement, with a very strong environmentalist message against fracking for oil and gas, plus some moral elements and brief Christian references to God and Christianity, but the few appeals to God don’t work
Foul Language:
At least 52 obscenities (including many “f” words), 16 strong profanities (half are GD and half are using Jesus), and 11 light profanities
Violence:
Lots of extreme violence (but not always gory or extremely bloody) include cannibalism, people cut off the heads of zombies or shoot their heads with guns or a shotgun and a black-gray dust instead of blood exits their necks and heads, several shots of zombies eating intestines and flesh, people push zombies away so that they can shoot their heads or cut them off to kill the zombies, hermit shoots rifle over the heads of a sheriff and his deputy, a streak of blood splatters female deputy’s face, zombies try to barge through doors and windows, zombies lift up a man before they cast him to the ground to swarm over him and eat him, car hits a zombie, etc.
Sex:
No sex or sexual content/references
Nudity:
No nudity
Alcohol Use:
No alcohol use
Smoking and/or Drug Use and Abuse:
No smoking or drugs; and,
Miscellaneous Immorality:
Funeral home owner finishes using garish makeup to prepare two corpses for burial, and police chief thinks racist farmer has falsely accused a local hermit of stealing a chicken, but later the hermit is shown eating a piece of fried chicken as he spies on the other townspeople with binoculars.

THE DEAD DON’T DIE is a droll horror comedy starring Bill Murray as the sheriff of a small town faced with handling the beginning of the zombie apocalypse caused by oil and gas fracking in the Arctic, which throws the Earth off its axis. No amount of good comedy can ameliorate the depressing, misanthropic, politically correct story, and the anti-capitalist, environmentalist messages in THE DEAD DON’T DIE, which also contains lots of strong foul language and extreme violence.

The movie opens with Bill Murray’s character, Sheriff Cliff Robertson, and his deputy, Ronnie Peterson (played by Adam Driver), hiking into the woods to confront the local hermit, who’s been accused of stealing a chicken by the local racist farmer. Hermit Bob fires a rifle over their heads and obscenely tells them to go away.

Meanwhile, Sheriff Cliff remarks how strange it is that it’s been so light out so late at night. Reports in the news warn that fracking for oil and gas in the Arctic has tilted the Earth’s axis, but government officials deny the reports. “This is going to end badly,” Deputy Ronnie keeps telling Cliff.

That night, after darkness finally descends, two dead people rise from their graves in the local cemetery. They murder the waitress and the female janitor at the local diner and start eating their flesh.

The next morning, a frequent customer at the diner named Hank finds the dead bodies. Cliff and Ronnie arrive on the scene separately, followed by the town’s other deputy, Mindy. Cliff asks Ronnie what he thinks happened, and Ronnie claims it’s clearly the work of zombies. “This is going to end badly,” he adds.

Sure enough, the next evening the rest of the dead people in the cemetery become zombies and start attacking and eating the townspeople. Meanwhile, at the local funeral parlor, the new Scottish owner of the parlor, Zelda, uses her samurai sword to cut off the heads of the two dead people she was preparing for burial when the two corpses suddenly open their eyes and sit up.

With only Cliff, Ronnie, Mindy, and Zelda to defend the town, it’s clearly going to be a long night. “This is going to end badly,” Ronnie says again. “Why do you keep saying that?” Cliff asks. “Because I’ve read the script,” Ronnie replies.

THE DEAD DON’T DIE is fairly funny, in a dry sort of way. However, sometimes the humor undercuts the movie’s suspense and jeopardy. Perhaps that’s the point, but it won’t help the movie when moviegoers compare this movie to other popular zombie movies with a lot of comical twists, such as Edgar White and Simon Pegg’s extremely entertaining SHAUN OF THE DEAD from 2004.

Also, THE DEAD DON’T DIE would be more entertaining if it didn’t have such a depressing ending. In fact, the ending isn’t only depressing, it also has an annoying politically correct message. In the movie, the zombies return to the places where they hung out when they were alive, like the local diner, the hardware store, the local convenience store and gas station, the playground, etc. At the end, viewers are treated to a brief running commentary from Hermit Bob, who’s played by Tom Waits, the acclaimed singer and songwriter. Bob blames the transformation of the dead people into zombies on America’s consumer society, capitalism and people’s materialist greed. This anti-capitalist message is similar to George Romero’s 1978 sequel to NIGHT OF THE LIVING DEAD, DAWN OF THE DEAD. THE DEAD DON’T DIE also contains lots of strong foul language and extreme violence.