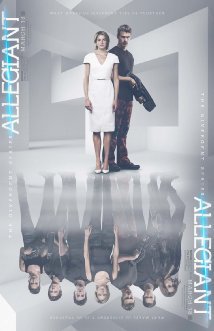 THE DIVERGENT SERIES: ALLEGIANT is the third movie in the science fiction series. Tris opens a box that has a plea for help from a place beyond the walls that protect her city, a post-apocalyptic Chicago. When she convinces her boyfriend, Four, to go beyond the walls, others decide to come along with them. Beyond the walls, they find a futuristic city led by a man named David. David convinces Tris to let him map her DNA. However, Four doesn’t trust David, and it’s revealed David may actually be harming Chicago. An intense battle ensues.

ALLEGIANT is entertaining and suspenseful, with a great score, excellent set design and believable performances. ALLEGIANT has a strong redemptive, moral worldview. The heroine works hard for the betterment of society, protecting life and people. She also learns a lesson in forgiveness. ALLEGIANT contains elements of sacrifice and fighting against government tyranny. The movie does have some brief foul language and bloodless violence. So, MOVIEGUIDE® advises caution for older children. ALLEGIANT isn’t for younger children. The final movie in the DIVERGENT series comes out in 2017.

(CC, BB, ACAC, LL, V, N, M) Strong redemptive, moral worldview fighting tyrannical antagonists and extolling sacrifice, giving to others, forgiveness plus character concerned about and tries to protect children and family, mentions of a miracle, and character saves another character; 10 obscenities and two profanities; strong action fighting, but not much blood or gore, people put on trial and shot in the head off screen, woman is shot and killed, but not bloody; no sex, some kissing; partial and obscured rear female nudity in a shower; no alcohol use; no smoking, but poison is given and results in a drug-like state; and, lying done by a traitor, power misused, and a bad parental role model.

After Tris opens a box explaining to her that there is a world beyond the bordered walls. The box also contains a plea for help. Tris decides to go beyond the walls protecting Chicago with her romantic interest, Four.

Meanwhile, things are getting out of hand in Chicago. The leader of the Factionless group, Evelyn, is putting people on trail and holding public executions. Although Evelyn is Four’s mother, he understands she has a problem, so he saves one of the inmates, Tris’ brother, Caleb.

Tris, Four and Caleb decide to jump the walls. As they are driving, Peter joins them, along with Christina and Tori. However, while climbing the wall, Tori is shot down by one of the Factionless leaders, Edgar. Tori is one of Tris’ best friends, but the group must move on to make it over the wall. When they make it, they find a red land desert and no city in site. They continue to trek through the desert, but it is not long before Edgar finds them and starts shooting. Suddenly, an invisible wall opens with an army on the other side. The army fights back Edgar to save Tris and her friends. After they fight off Edgar, the army tells Tris they know she opened the box, and they have been waiting for her arrival. They bring the group to a futuristic future city, where Tris meets David, the city’s leader.

It turns out that Tris has a pure genetic makeup. David tells Tris he wants to map her DNA for the future. When Tris tells Four what’s happening, and that Four’s DNA is “damaged,” he gets defensive and wonders if David can be trusted. The city gives Tris and the others a particular job. Four and Christina are soldiers, Peter and Caleb are security.

When Four and Christina are sent out on mission, they see that the soldiers are actually taking children from their parents. Distraught, Four knows he must do something about it, but it may be too late.

THE DIVERGENT SERIES: ALLEGIANT is an entertaining movie, though viewers who haven’t seen the previous two movies may be confused. The movie has a great score and good set design. The acting is well done. However, the conflict isn’t resolved because it’s implied there’s a follow up movie, which leaves the audience wondering what’s coming next. The final movie in the series, ASCENDANT, is scheduled for June 2017.

ALLEGIANT has a strong redemptive, moral worldview. The heroine is working hard for the betterment of society, protecting life and people. She learns to forgive. Meanwhile, her romantic interest is concerned about children and protecting the family unit, though his own mother is corrupt. ALLEGIANT also contains elements of sacrifice and fighting against government tyranny. ALLEGIANT does have some brief foul language and some bloodless violence. So, MOVIEGUIDE® advises caution for older children and doesn’t recommend ALLEGIANT for young children.