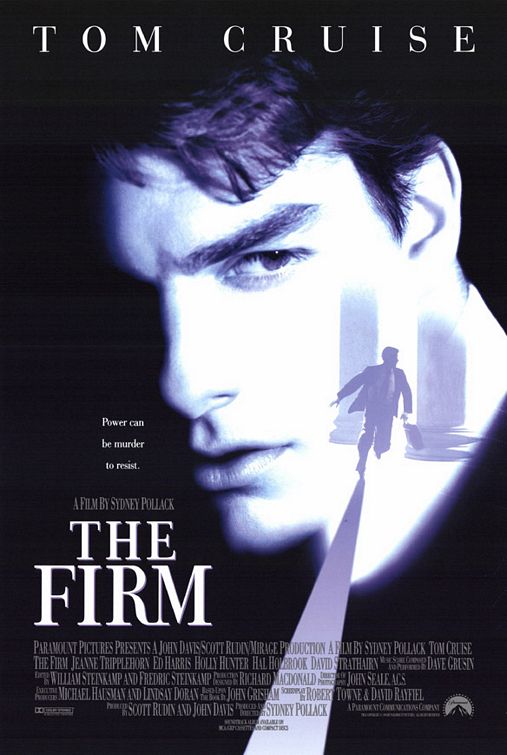 In THE FIRM, Tom Cruise plays the part of a Harvard Law School graduate who accepts a position in the small, but rich Memphis law firm; however, after some of the lawyers mysteriously die in an accident, Mitch realizes that his company is involved with the mob. THE FIRM is a suspense-filled, well-directed movie, regrettably laced with obscenity, profanity, adultery, sexual immorality, and extreme violence.

THE FIRM opens with various law firms courting Harvard Law School honors graduate Mitch McDeere (Tom Cruise). Shortly, the Memphis firm of Bendini, Lambert & Locke discretely presents their offer in a sealed envelope, which McDeere chooses not to open. Mitch is razor sharp, ambitious and happily married. Mitch and Abby are drawn into a sophisticated, prestigious lifestyle in which everything is provided. However, when a diving accident occurs involving some lawyers from the Firm, Mitch and Abby are troubled. On a business trip, Mitch finds files that confirm his worse suspicions: The Firm is a front for the Mafia; and, that no one has ever left The Firm–alive. From this point on, Mitch develops a strategy to be the first one to leave The Firm. However, The Firm covers their bases to control him. On the line for Mitch, is his desire to maintain his oath as a lawyer, to uphold the law, but at the same time, to break free from The Firm.

THE FIRM is a suspense-filled, well-directed movie that will keep viewers on the edge of their seats. The movie illustrates that each of us, like Mitch, has to choose whether to do the right thing or enrich himself. Regrettably, the movie is laced with obscenity, profanity, adultery, sexual immorality, and extreme violence.