THE GHOST AND THE DARKNESS 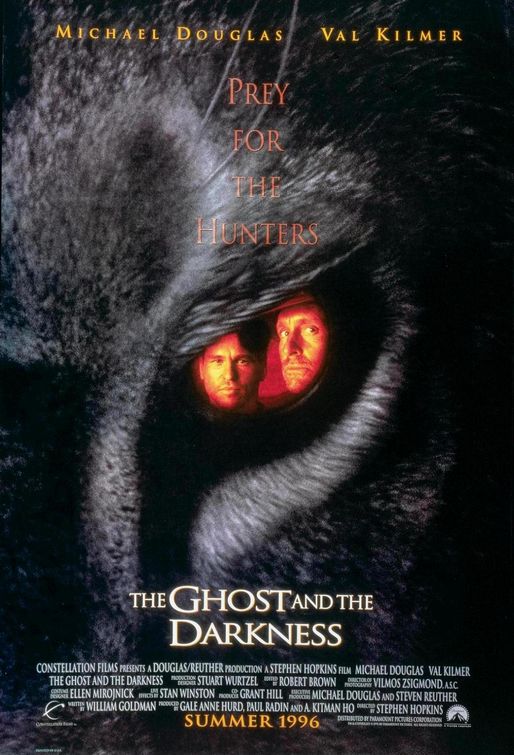 THE GHOST AND THE DARKNESS are two ferocious man-eating lions in turn-of-the-century Africa, and they are the true stars of the movie by the same name. Having the promise of an action movie like JAWS, it may be too dramatic for action fans and too violent for drama fans. With many images of lions attacking and eating humans, it is not a movie for children.

THE GHOST AND THE DARKNESS are two ferocious man-eating lions in turn-of-the-century Africa. Val Kilmer stars as Co. John Henry Patterson, an man commissioned to build a bridge across the Tsavo River. Patterson kisses his pregnant wife good-bye and heads for the Dark Continent. Arriving on location, he is alarmed to discover that the crew is under lion attack. Unfazed, Patterson kills a lion and is considered a hero. Encouraged, the team continues until another lion attacks, and then another. Patterson pledges to kill them quickly, but he doesn’t. Instead, the two lions kill more men and the crew threaten to leave. Hope comes from American big-game hunter Remington. Together, Patterson and Remington battle the savage beasts.

This movie has beautiful photography, two handsome leading men, a clear villain — the lions, and a clear goal. What this movie doesn’t have is proper pacing or suspense. The focus, it seems, is not on the animals or the inadequacy of the men to fight them, but on the reputations of two protagonists who are not that likable. The lions attack frequently, and we get to see every pounce, bite and tear. It is bloody and violent. It is not a movie for children. Action people may find it too dramatic and boring in some parts. If lions roar, this movie meows.

THE PROPRIETOR revolves around a celebrated novelist, Adrienne Mark, who decides to leave New York to return to her native Paris. Best known for a novel that she wrote that liberated the way cinema looked at relationships, Adrienne is returning to Paris to resolve childhood angst. Recurring nightmares tell her that as a young girl, she could have saved her mother’s life from the hands of the National Socialists. She buys back the apartment where she once lived with her mother and confronts the ghosts of her childhood. Adrienne also resolves more romantic aspects of her life by reuniting with her estranged but still devoted husband Elliot.

The movie is well-intended, and Adrienne is to be applauded for her stand against violence and racism. But, the story line is lightweight. Adrienne’s fame is based on one novel, and this poses a serious credibility for the story. The utter devotion she inspires in all who meet or know her borders on overkill. It is hard to root for someone so superficial even when it is evident that she is basically a decent human being. It is also of some concern that the movie contains exclamatory profanities, some implied sexual situations that involve multiple partners and a cigarette-smoking Adrienne. THE PROPRIETOR is intrinsically moral, but it is flawed.