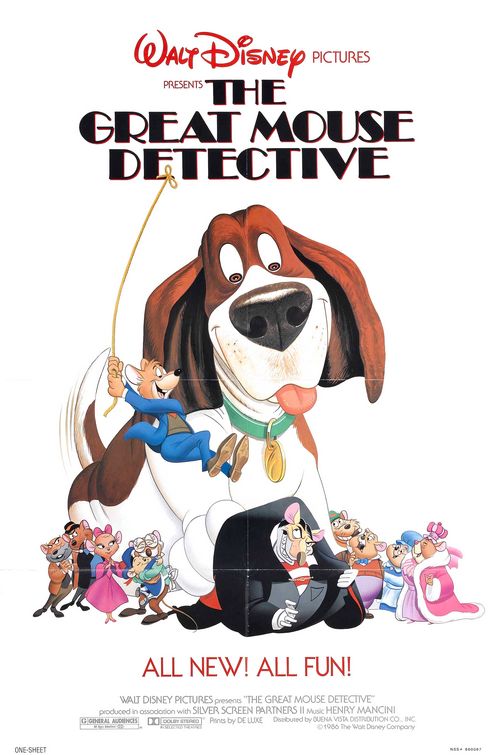 THE GREAT MOUSE DETECTIVE is a delightful reissue from Walt Disney's vault of animated classics. Clever, funny, sophisticated, and at its conclusion, terrifically exciting, this film is thoroughly entertaining for all ages. Adults should feel free to enjoy an evening performance even if they can't find a child or two to bring along.

(B, C, V) Good does triumph over evil in a most magnificent fashion. Even so, very small children may be startled by the sudden appearance of the bat character, Fidget.

THE GREAT MOUSE DETECTIVE is a welcome re-issue of the 1986 Walt Disney delight, which ranks among the most entertaining of the studio’s animated films. Set in London in 1893, THE GREAT MOUSE DETECTIVE features the ingenious Basil of Baker Street, who lives under the residence of Sherlock Holmes and emulates the great sleuth’s remarkable powers of deduction. Requesting his help is young Olivia, whose toymaker father has been kidnapped by the evil Ratigan. This villainous rat intends to foist a mechanical Mouse Queen on London’s mice, whom he will thus rule with an iron paw. Basil, with the assistance of portly Dr. Dawson and an enormous bloodhound borrowed from Mr. Holmes, cleverly tracks down Olivia’s father at Ratigan’s hideout. Unfortunately, all are captured by the rat. Their escape is topped by an exciting battle between Basil and Ratigan amidst the clockwork maze of Big Ben.

THE GREAT MOUSE DETECTIVE works at multiple levels of sophistication, including a number of gags which only adults will appreciate. The pacing, characterizations and music are first rate. Far more entertaining than most contemporary movies, this film is well worth seeing even if one can’t locate a child to bring along.