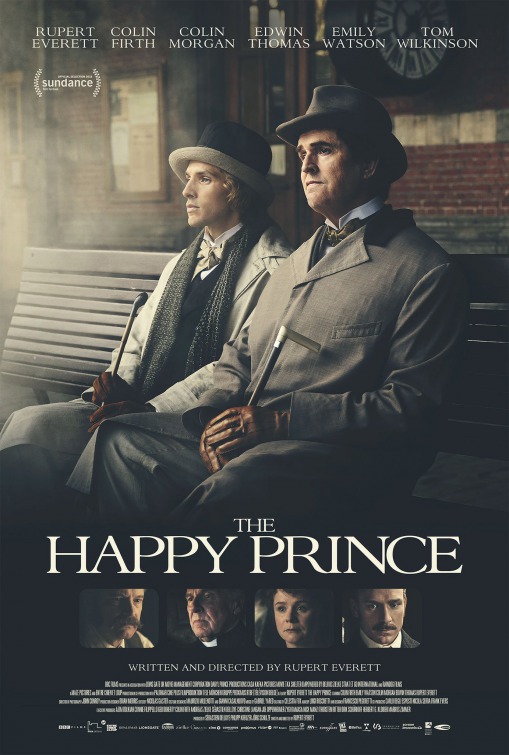 THE HAPPY PRINCE captures the life of well-known author Oscar Wilde when he’s released from jail in 1897, after being convicted of homosexual affairs. This movie shows a dark side to the man, who was thought of as a genius, but lived and eventually died for his hedonistic lusts. Instead of returning to his wife with regret after his release, he continues to see the feckless man with whom he was having an affair before his imprisonment. With little money, Oscar relies on the good will of the people around him who will still accept him and who continue to love him.

Rupert Everett delivers an excellent performance as Oscar Wilde in THE HAPPY PRINCE. His performance is close to perfect, showcasing the depth and darkness of this man. As a period piece, THE HAPPY PRINCE is quite well done, but there are too many flashbacks that take away from the story’s drama. Also, THE HAPPY PRINCE contains lots of questionable content, including a strong Romantic worldview, multiple homosexual affairs and excessive substance abuse. Consequently, MOVIEGUIDE® finds THE HAPPY PRINCE totally unacceptable morally.

(RoRoRo, HoHoHo, C, LLL, VV, SSS, NNN, AAA, DDD, MMM);
Dominant Worldview and Other Worldview Content/Elements:
Dominate romantic worldview where the characters simply follow their hearts and desires above anything else, without regard to commitment or family, the moral compass is skewed and although there is mention of finding God, there is no evidence of this based on actions; Homosexual elements throughout as the main character is imprisoned for two years for having a homosexual affair and cavorting with younger male prostitutes and continues to do so after his release despite his marriage to a woman, there is a “gentleman’s party” relatively lengthy scene with men engaging in affairs and other acts with other men, including what could only be described as strip musical chairs; Very light Christian elements, Oscar claims to have found God after getting out of prison, he mentions Christ multiple times and then is baptized and taken into the Catholic church on his deathbed;
Foul Language:
At least 21 obscenities (most are “f” words), nine profanities (several strong ones), and some toilet humor jokes;
Violence:
A few examples of violence, a couple bar brawls with a light amount of blood, young boys chase Oscar and his friends taunting them, Oscar finally threatens them and takes one of them to the ground, Oscar’s ear bleeds on multiple occasions due to a previous injury, and he once spreads the blood on the mirror in front of him, surgery scene on the ear with a heavy amount of blood, people spit on Oscar in one scene;
Sex:
High amount of sexual content throughout this movie, Oscar has multiple gay affairs, he pays off a male prostitute, throws a gay gentleman’s party where everyone is engaging the others in an “anything goes” type of manner, the men who appear to be together flirt with and sleep with others with encouragement, many examples of implied homosexual behavior;
Nudity:
Heavy nudity throughout the entire film includes a few scenes with full frontal male nudity, multiple examples of rear male nudity, and upper male nudity;
Alcohol Use:
Heavy amount of alcohol use, there is hardly a scene where someone doesn’t have a drink in their hand, Oscar tends to get quite drunk and sometimes doesn’t remember events the next day or hurting himself, Oscar convinces a club owner to allow a child into the club and buys boy a beer;
Smoking and/or Drug Use and Abuse:
High amount of smoking and drug use, per the times, almost everyone smokes cigarettes or cigars constantly, a few examples of cocaine use, Wilde offers a teenager and a younger boy cocaine and absinthe, one example of morphine for medical use; and,
Miscellaneous Immorality:
Wilde claims to be changing his life and immediately begins staring at a male waiter’s behind, bullies taunt Wilde and his friends with homosexual jokes, Wilde talks about going to a church because the priest is attractive, many examples of strong immorality and lack of character, and examples of moral relativism and family dysfunction.

THE HAPPY PRINCE takes viewers back to the turn of the last century, more than 115 years ago in Paris. Playwright and satirical humorist Oscar Wilde has been released from prison after being sentenced to hard labor for two years because of a homosexual love affair. The people who will still communicate with him have to disguise his real identity for his own protection. His wife won’t speak to him or allow him to see his children. Once a wealthy and famous author, he’s is now penniless and at the mercy of those around him.

Wilde emerges from prison claiming to be a changed man. He says that he found Christ and that he refuses to go back to Lord Alfred Douglas, or “Bosie,” the man whose affair imprisoned him in the first place. He proves it to himself and his friends by tearing up a letter from Bosie and tossing it in the fireplace, only to retrieve it and piece it back together after his friends are gone.

Oscar and Alfred meet again and are able to easily remember their feelings that they had long before. They are soon inseparable and are denied their allowance because of it. Oscar hasn’t written anything new in a while and has been ostracized from his family and finances. Alfred’s mother offers to pay Oscar a sum to convince the men to separate from each other. Turning it down, Oscar leaves Alfred in anger.

Having the taste for champagne, but lacking the means to acquire it, Oscar sits at cafes alone adding to his bill but cannot leave because he cannot pay. He’s slowly making his way towards crossing over to the afterlife. Lying on his deathbed, he tells the story of “The Happy Prince,” an allegory by Wilde showing that God loves those who love their fellow human beings, especially those who help the poor and needy.

The story of “The Happy Prince” is told by Wilde to various people throughout the movie, but it is in no way a metaphor or a reflection of the way he lived his life in the movie, other than when the bird died in the story, he died in the movie. Toward the end, Wilde tries to help these two young brothers who are poor and struggling. He gives them money once to buy himself and them breakfast. It was to them that he was telling the final part of the Happy Prince story. However, in the movie, he also gave them alcohol and cocaine although the younger brother couldn’t have been more than 13.

For THE HAPPY PRINCE, Rupert Everett completely transforms for this role of Oscar Wilde, someone who he has admired for most of his life. Also taking on the responsibility of writer and director, Everett puts forth an admirable work of art. Showcasing the last few years of this renowned author shines a new light on the truth of the tragic way his life ended. Being a period piece, the audience is easily taken back into that world more than 115 years ago (Wilde died in 1900). The movie opens with Wilde on his deathbed while he feverishly thinks about the past events in his life, especially the three years of degradation after he’s released from prison. As a result, there are many flashbacks, and these flashbacks detract from the experience of watching THE HAPPY PRINCE.

Also, THE HAPPY PRINCE contains an extremely high amount of questionable content. From the very beginning, viewers are introduced to the immoral life that Oscar Wilde lived. There is an exorbitant amount of sexual content, nudity and drug and alcohol use. Although there is mention of finding Christ, there is no evidence of this supposed change of heart. At the very end of his life, Wilde is baptized and taken into the Catholic church. Reportedly, the real priest who administered the last rights found Wilde’s contrition while reciting his repentance to be sincere, but Wilde’s behavior in the movie doesn’t reflect that.

All in all, therefore, media-wise viewers will find THE HAPPY PRINCE unacceptable and abhorrent.