THE ISLAND OF DR. MOREAU 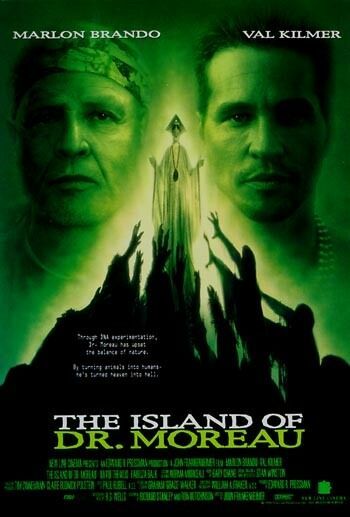 THE ISLAND OF DR. MOREAU is a laughable, idiotic farce of the H.G. Wells classic. On the island, a stranger meets the results of 17 years of research and experimentation: a whole village of animals that have become more human -like through DNA recombination. Throughout the movie, the audience groaned and laughed, but it had neither humor or fright. THE ISLAND OF DR. MOREAU is a dog.

THE ISLAND OF DR. MOREAU is a laughable, idiotic farce of the H.G. Wells classic. The movie starts with Edward Douglas adrift at sea in the near future. He is saved by Montgomery who nurses him back to health and takes him to a remote island. There, Douglas finally meets the results of 17 years of research and experimentation: a whole village of animals that have become more human -like through DNA recombination. A sort of priest tells them to “Obey the law of God.” God is Dr. Moreau and the law is to not kill another animal. Dr. Moreau is able to keep order through a high-tech shock system. When one creature, a hyena rips out his electronic implant, he raids the home of Dr. Moreau. They Hyena organizes a total insurrection and the complex is destroyed. Douglas, meanwhile, fights to escape the island.

Throughout the movie, the audience was laughing, but it had no intentional comedy. People laughed at the grotesque creatures in tuxedos. They laughed at Brando in spooky makeup. People also groaned during the movie. They groaned at the misplaced and blasphemous use of Scripture. The biggest problem with THE ISLAND OF DR. MOREAU is that it didn’t give us any place to place our sympathies. Like, FRANKENSTEIN this movie promises to explore the role of science and the limits of man. This movie promises scares, two great leads, and examinations of relevant issues like medical experimentation. It didn’t deliver on any of these points. THE ISLAND OF DR. MOREAU is a dog.