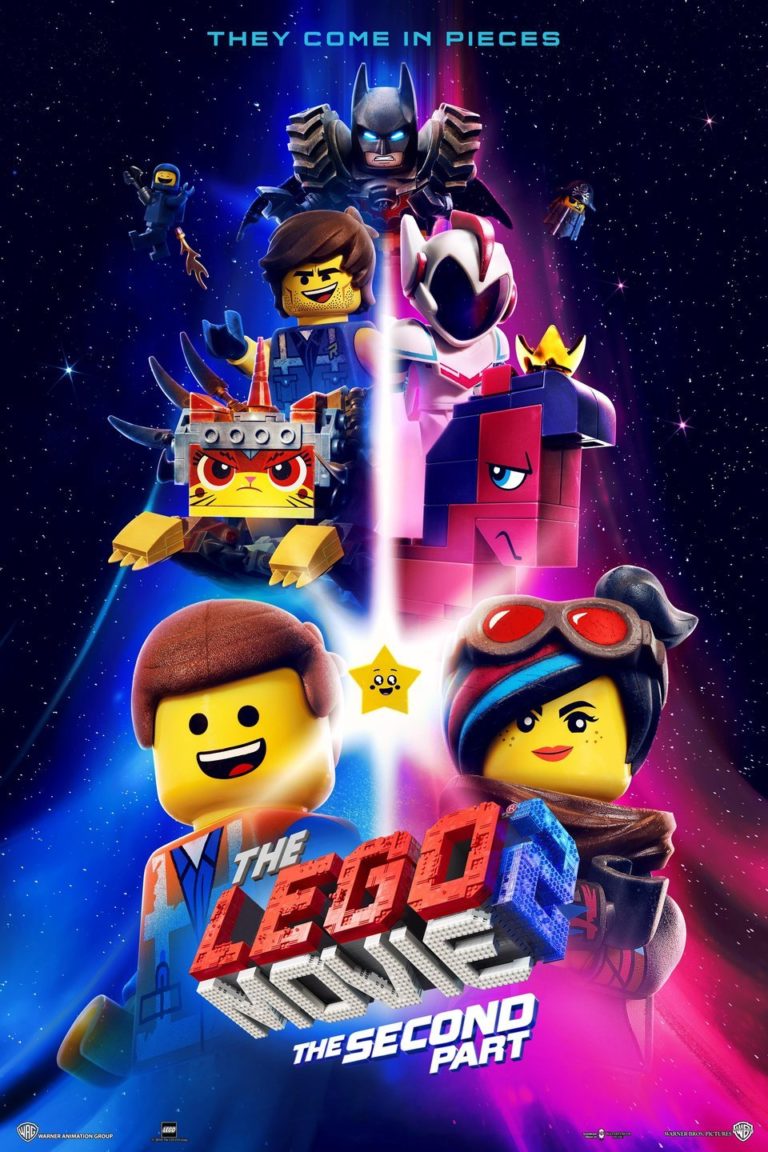 THE LEGO MOVIE 2: THE SECOND PART is a sequel to the animated hit about LEGO Toys living in the basement of a human family. In the LEGO world, Emmet and his best friend, Lucy, are separated when an alien soldier sent by an outer space queen kidnaps Lucy and others. Emmet, who’s a bit on the soft side but has a heart of gold, must toughen up to rescue them.

LEGO MOVIE 2 has plenty of goofy hilarity, action and twists to keep everything engaging. Even better, the movie has a surprisingly powerful sweet story about overcoming sibling rivalry with love, trust and understanding. The movie’s Christian, redemptive view of life is supported by a reference to the Love Passage in Chapter 13 of First Corinthians. Emmet, the hero in both the original LEGO MOVIE and the sequel, is a messianic figure who displays love. Emmet tries to make friends with the aliens by giving them a heart made of LEGOs. The live boy in the movie does the same thing with his sister. LEGO MOVIE 2 is a lively, lovely family movie.

(CCC, BBB, ACAC, PC, Fe, FR, V, N, M):
Dominant Worldview and Other Worldview Content/Elements:
Very strong Christian, biblical, moral worldview with a Christian, biblical reference to Verse 13:11 of the Love Passage in 1 Corinthians 13:1 to 1 Corinthians 14:1 that becomes part of the movie’s extremely positive premise that love conquers division (in this case sibling rivalry) and promoting having an open heart and teaching brothers and sister to love one another and be kind to each other, characters want to protect their city against seemingly evil invaders who try to brainwash their enemies, good is extolled and evil renounced, some characters are very compassionate and kind, characters help save one another, and the movie’s savior hero is a messianic figure who displays love, with an overt anti-totalitarian message against totalitarian brainwashing and “re-education,” plus a light politically correct, feminist subtext that seems to attack “toxic masculinity” and support emasculating men (making them “soft”), but this element occurs in the Christian, biblical context of the movie’s dominant Christian, biblical worldview and premise of the Christian understanding of the meaning of love and even the feminist icon character who loves the movie’s savior hero has to soften her soul and have an open, loving heart and a vampire LEGO character says the Hindu greeting “Namaste,” which means “I recognize the divine in you” (in Christianity, people aren’t divine but they can have Jesus and the Holy Spirit in their hearts, so Christians believe they have God inside them and partake of God’s divine nature through Jesus by the power of the Holy Spirit, but they themselves are not divine)
Foul Language:
No obscenities or profanities (a few utterances of “heck”), and a toy character vomits up a clump of sparkles
Violence:
Very light animated violence, with characters that fight each other and some light jeopardy, Duplo aliens attack and smash every shiny thing they see, a LEGO character from outer space forcibly kidnaps other LEGO characters and takes them with him, a LEGO character smashes a towering wedding set made of LEGOs, toy characters fall under a dryer machine but rescue themselves or are rescued, Batman shoots toy Bat-missiles at a villain’s spaceship, but they bounce off it, and he eventually smashes it using part of the Statue of Liberty LEGO construction in the movie, toy characters fall into a dark hole, but it’s really just a storage box, some explosions
Sex:
No sexual content, but light innuendos
Nudity:
Batman is shirtless once or twice
Alcohol Use:
No clear alcohol consumption Smoking and/or Drug Use or Abuse: No smoking or drug use; and,
Miscellaneous Immorality:
Lying, deception, kidnapping, and characters get tattoos.

Rent or Buy THE LEGO MOVIE 2: THE SECOND PART: