THE LIGHT OF FREEDOM

"The Difference One Passionate Family Can Make" 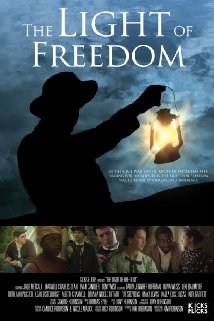 The historical, family movie THE LIGHT OF FREEDOM takes place at the start of the Civil War in 1861. Anna Handby and her family are trying to save slaves from a bounty hunter. The family is also going to extraordinary lengths to help the slaves find their families. Anna and her friends begin a thorough investigation to discover who in town is helping a mysterious bounty hunter to capture the escaped slaves.

THE LIGHT OF FREEDOM is inspired by true events and is very educational. It has a strong Christian worldview with frequent meaningful, morally uplifting messages. It has amazing redemptive qualities and many wonderful biblical references. This historical, patriotic movie demonstrates the difference one compassionate family can make. Though a low budget movie, it captures the flavor of the era and gives reasons to reflect on the characters’ struggles. However, the performances lack some emotional depth. They sometimes come off as awkward and unrehearsed. Despite this, THE LIGHT OF FREEDOM is a positive, wholesome Christian movie for families that can be viewed and understood by all ages.

(CCC, BBB, PPP, V, A, BBB, CCC, V) Very strong Christian, biblical, moral worldview with many references to God and the Bible, including a recently rescued slave picks up the Bible and reads a passage, and men and women fight for what they think is right and to free slaves, all with God’s help; no foul language; brief violence during the battle scenes with gunfire and explosions and men dying but no blood; no sex; no nudity; implied alcohol use; no smoking or drugs; and, slavery, but rebuked.

The movie THE LIGHT OF FREEDOM is inspired by true events that happened at the beginning of the Civil War.

The movie begins in 1861 with a montage of a little town on the edge of the Ohio River. With the town’s people congregating to the community church, speeches are being made to encourage all the men to join the Union Army. The fight for freedom begins.

After husbands, brothers and fathers leave to join the battle for what they feel is the right thing to do, those who stay behind discover ways they can help as well. Joining forces, the Underground Railroad begins with success. Bravery abounds, despite the dangerous task of sneaking slaves over the Ohio River to freedom with bounty hunters on their trails.

One young girl, Anna Handby, makes it her personal goal to save as many slaves as possible. With her family’s help, she makes a remarkable difference. Anna decides to group her friends together and start a thorough investigation for clues linking a bounty hunter with someone in town. They know someone has a secret, and they are determined to discover it.

THE LIGHT OF FREEDOM is a family movie for all ages. This historic and patriotic movie demonstrates the difference one passionate family can make. Though a low budget movie, it captures the flavor of the era and gives reasons to reflect on the characters’ struggles.

This movie has a Christian worldview with frequent meaningful messages. For example, the bounty hunter struggles between doing what’s right, or being corrupted but able to provide for his little sister efficiently. The characters all discover that leaning and depending on God is what they need to do.

The bounty hunter tries to soothe his conscience. Capturing slaves and dragging them back to their owners was right according to the written law. However, Anna’s dad confronts him about it, and asks the hunter if he truly thinks this law that humans wrote could overrule the laws God has given us.

Although this movie has amazing redemptive qualities and many wonderful biblical references, the acting comes off at times as awkward and unrehearsed. The dialogue itself is simple and to the point, but it’s sometimes performed with loud voices with little feeling behind the words.

There are almost no controversial elements in this movie. There is mention of the soldiers drinking whiskey. The war scenes include gunfire, but the sound affects are not entirely believable and therefore not scary. Although there are a few times when men are shot and fall to their deaths, there is no blood.

Overall, THE LIGHT OF FREEDOM is a positive, wholesome Christian movie for families that can be viewed and understood by all ages.

Rent or Buy THE LIGHT OF FREEDOM: