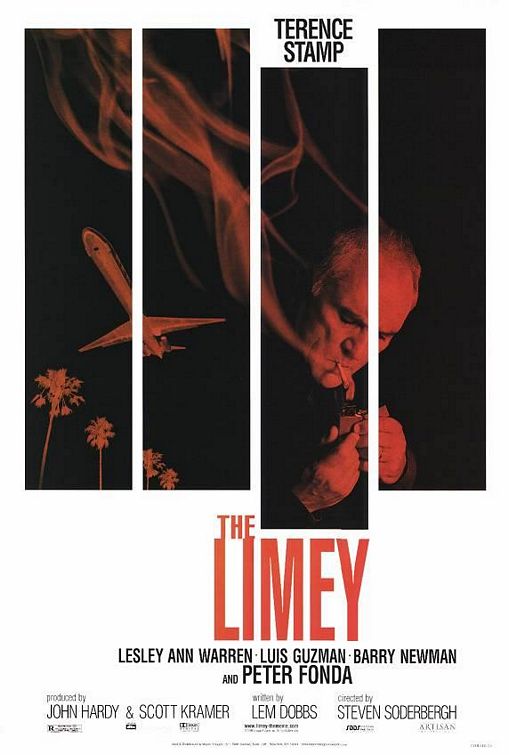 In THE LIMEY, Terrence Stamp plays a longtime Cockney thief who seeks revenge for his daughter's mysterious death by investigating a record producer played by Peter Fonda. Although it contains strong violence and many obscenities, this film noir slowly builds to a moral conclusion which reveals that the wages of sin is death, that a life of crime can destroy the ones you love most and that those who live by the sword may die by the sword.

Strong moral worldview about a pagan protagonist & his various enemies, both of whom learn that the wages of sin is death, plus an important reference to God; 73 obscenities & 7 mostly mild profanities; strong action violence such as men beat up another man who goes back & shoots them off-screen, man tosses henchman down canyon to his death, man shoots at people in car during car chase which ends with both cars battered, man imagines killing man who caused his daughter's death, attempted contract murder, & bloody shootout at end with several men dying & one man breaking his ankle with an unnecessary cracking sound; no sex; no nudity but woman's head & shoulders in bathtub scene; alcohol use; smoking, references to drug sales & cops burn cocaine or heroin; and, revenge ultimately abandoned, gangsters plot & government agent shows he's apathetic about certain kinds of criminal activity.

Move over, Quentin Tarantino! You’ve got some serious competition, baby!

Emboldened by his critical success with OUT OF SIGHT, from an Elmore Leonard crime story, filmmaker Steven Soderbergh has created another homage to hardboiled crime fiction, THE LIMEY. Starring Terrence Stamp as a relentless, Cockney thief from England, the movie’s protagonist is reminiscent of the Parker novels by author Richard Stark (a.k.a. Donald E. Westlake). One of Stark’s Parker novels was remade by Mel Gibson earlier this year, called PAYBACK (from an earlier movie starring Lee Marvin called POINT BLANK). Unlike those movies, however, there’s a moral center hidden beneath THE LIMEY. The movie’s morality surfaces in the movie’s surprising resolution to its tale of revenge, giving THE LIMEY a final heartbreaking poignancy that is extremely satisfying and provocative.

Stamp plays a Cockney thief named Wilson, who’s come to Los Angeles to avenge his daughter’s “accidental” death. Wilson suspects her rich boyfriend, a successful record producer named Terry Valentine, played by Peter Fonda in another incredible performance. Sure enough, Valentine seems involved with a cast of gangsters, not the least of which is his ruthless “security adviser,” Avery, played with verve by Barry Newman, a reliable character actor from many a TV show. Several shootouts take place before Wilson discovers what really happened the night his beloved daughter died. The revelation puts a dramatic halt to Wilson’s search for revenge and shows him, in a gut-wrenching but subtle way, that the wages of sin is always death and that a life of crime can destroy the ones you love most.

Soderbergh shoots THE LIMEY in flashback mode, with a lot of repeated images from Wilson’s past remembrances of his daughter as a child. These images show the audience what fond memories the laconic Wilson has of his child, memories which come to haunt him when he learns what really happened to her. Soderbergh also shows us repeated glimpses from important events during Wilson’s trip to Los Angeles, as if Wilson is mulling over all his experiences there which lead up to the final all-important revelation that leaves him filled with regret. Some viewers may find this style irritating, but it adds to the mystery in the movie and helps the viewer identify with the tragic images of the daughter that Wilson let slip through his fingers.

As Wilson, Terrence Stamp turns in an unforgettable performance of a complicated man who is, by turns, angry to the point of terrible violence, remorseful, wistful, and relentless. Peter Fonda also plays a complicated villain, Terry Valentine, who can be vulnerable, friendly and loving as well as ruthless and incredibly self-protective. His performance reminds one of his father’s brilliant turn as the villain in ONCE UPON A TIME IN THE WEST. Barry Newman as Valentine’s security advisor fits in well with the performances given by Stamp and Fonda. Newman’s character is a cool customer who brutally discovers that playing the hired gun is not all it’s cracked up to be, especially when you find yourself up against a better gunhand who can be more relentless than you because he has a personal stake in the conflict.

There’s some brutal violence in THE LIMEY, as noted in our content section, but it’s definitely not as bad as such recent film noirs like PULP FICTION or L.A. CONFIDENTIAL. There is also no sex or nudity in THE LIMEY. There are, however, many strong obscenities. Furthermore, throughout most of the movie, the protagonist, who is also a thief who has served three prison sentences, is on a relentless search for revenge. Although this immoral search is relinquished only at the end, the message of that ending is clearly that the wages of sin are death, that a life of crime can destroy those you love most and that those who live by the sword may die by the sword. This moral message may not have been so powerful if the movie had taken a more overt approach toward imparting such moral messages. Those who enjoy crime thrillers may find it hard to forget these sinful characters and the harsh lessons they learn.