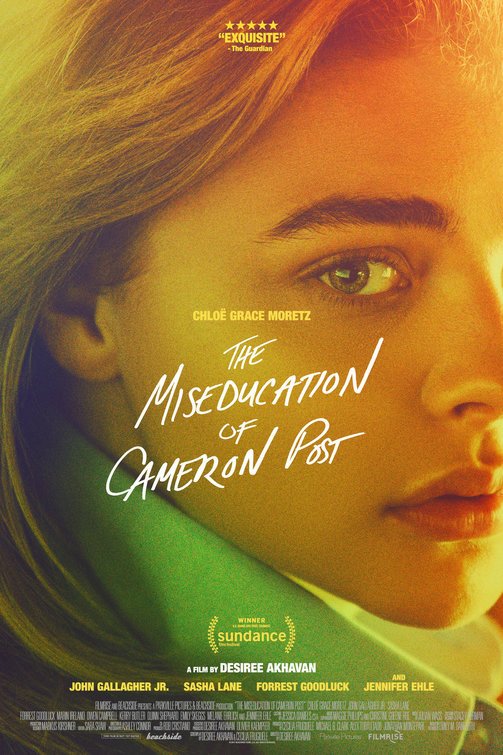 THE MISEDUCATION OF CAMERON POST is an independent drama promoting an abhorrent worldview. An orphaned teenage girl named Cameron is sent to a homosexual conversion therapy center run by two Christians, a former homosexual and his sister. At first, Cameron seems to respond to their treatment. Cameron then enlists the advice of two mockers, Adam and Jane, who convince her God and the Bible are just fairy tales. Then, Cameron tries to repair a friendship with one girl, but the two girls succumb to homosexual lust.

THE MISEDUCATION OF CAMERON POST isn’t as profound as the filmmakers might think. From the beginning, the Christian therapy center’s leaders are portrayed as gullible fools making up their therapy as they go, and as emotionally abusive legalists bent on programming people to hate themselves. Ironically, a couple scenes suggest God can indeed change one’s behavior if people are willing to surrender to Him. That said, the movie’s foul language and sexual content are excessively graphic and obscene. THE MISEDUCATION OF CAMERON POST is a shallow, lewd atheist mockery of the Bible, faith and Christians.

(HHH, HoHoHo, RoRo, AbAb, C, FRFR, V, LLL, SSS, NN, DD, MMM):
Dominant Worldview and Other Worldview Content/Elements:
Very strong humanist, pro-homosexual worldview with some Romantic elements that mocks Christians, Christianity and faith as a false religion, considers the Bible is a “fairy tale,” and portrays self-righteous atheist nonbelievers as more enlightened than believers, but a few scenes ironically present a Christian subtext that undercuts the movie’s Anti-Christian view and even implicitly supports the Christian characters’ view that God can indeed work in the hearts of those who believe if they yield to Jesus Christ, plus Native American gods are worshipped;
Violence:
Light violence includes one scene of a woman pushing a man down on the floor with her foot and a scene of implied mutilation;
Foul Language:
About 26 obscenities (including about 16 “f” words and seven “s” words), one profanity, one reference to a lesbian as a “dyke,” and two uses of a vulgar word for females who fool around;
Nudity:
Upper female nudity in two scenes;
Alcohol Use:
No alcohol use;
Smoking and/or Drug Use and Abuse:
No smoking but a few drug references, including one scene of teenagers abusing drugs; and,
Miscellaneous Immorality:
Very strong miscellaneous immorality includes lying, deceit, ridicule, moral relativism, hypocrisy, stealing, sneaking, mockery of other people’s personal beliefs, dysfunctional parental relationships, and bad role models.

Secular Hollywood radicals try to give Bible-believing Christians another black eye in THE MISEDUCATION OF CAMERON POST, a movie about homosexuality and the Christian approach to transform people through the Gospel of Jesus Christ, the Bible and prayer.

An orphaned teenage girl, Cameron Post, struggles with lesbian feelings during the 1990s, a time when homosexuality was much less accepted. Caught in a homosexual tryst with another girl by her boyfriend on prom night, Cameron’s aunt and guardian sends her to God’s Promise, a homosexual conversion therapy center in a remote area.

There, Cameron meets Reverend Rick and Dr. Judith Marsh, Rick’s sister, who converted him while she was a budding therapist. They both try to cram Christianity down Cameron’s throat, trying to convince her that if only she prays and reads the Bible enough, her attraction will go away. They also try to change her with the belief that her parents’ death and her athletic ability “contributed to her gender confusion.” Many scenes of people’s emotions during worship and images of straight-laced, plain looking students are inserted to mock the Christian experience.

While some of the young people are buying into the program, two of Cameron’s friends, Adam and “Jane Fonda,” don’t. Stealing every chance they get to mock the Christian treatment of homosexuality, they often refer to it as “SSA” (same sex attraction). The movie, of course, portrays these two rebels of the group as more enlightened than the others.

Other scenes start to contradict this portrayal, however. For example, when Cameron becomes real with her friends, she shares openly her doubt that there is a God or if she wants faith. Cameron thus has some bright moments where God is actually working in her life. Until, that is, she enlists the advice of Adam and Jane, who quickly convince her God, the Bible and Christianity are just fairy tales, not true or real at all. In one scene, Cameron and her friends belt out the lyrics to a secular song, only to have Judith scold them and tell them “back to work” and to “get the hair out of Adam’s eyes.”

Another bright moment is when Cameron reads a letter from her former roommate, who says she hurt her and took advantage of her friendship. Although portrayed as boring and gullible, Cameron at one point says to her friends, “She’s better than all of us. I’m tired of feeling disgusted with myself.” This moment gives viewers an inside look into Cameron’s real feelings toward herself and her behavior.

In an attempt to repair this relationship, Cameron joins her former roommate as they both do “blessercize” videos together and spends more time with her. This bright spot dims, however, when their time together results in the two having lesbian homosexual relations. She also reveals she’s been lying about her attraction to another male at the center. Viewers briefly feel a connection to Cameron throughout the movie, particularly when they discover her parents both died when she was young.

That said, the irony of the movie’s title is not lost on MOVIEGUIDE®. As much as Cameron encounters some people who are “miseducated” about homosexuality, Director Desiree Akhavan seems equally as miseducated. She takes the easy way out, depicting Christians as legalistic rule enforcers who chant, “You must be the change,” during prayer times and who gullibly believe everything people tell them. Making constant references to gender confusion and homosexuality interchangeably, the movie’s script sets to reinforce to viewers that Christians are behind the times and woefully out of touch with “science” and the “real” world.

Although this movie is meant to mock Christians who are trying to help those struggling with homosexual tendencies, it ultimately and ironically reinforces the idea that God can faithfully change anyone’s heart if they really are willing to yield to the Lord. For example, in scene, the therapy center’s director, Rick, shares his testimony of how two Christians found him in a bar. They knew he was struggling with his homosexual feelings and reached out to help him. “It was God,” he declares to Cameron. Although the filmmakers do their best to pick apart anything the Christians try to do to help Cameron or the other “disciples,” they are never able to discredit Rick’s testimony of his conversion to heterosexuality. Thus, when they portray popular Christian beliefs through references to homosexuality and sin being a “thorn in the flesh,” and God’s grace being sufficient, discerning Christian viewers will have moments where they see right through the agenda being pushed by the filmmakers and see that God does work in the hearts of those who believe.

Also, although the movie’s plot is overtly a mockery of faith, it does give viewers a more intimate look into the life and struggles of people with homosexual feelings and lusts. That said, the movie has a high level of sexual content, including homosexual sex, pornography and references to genitalia. It also contains an excessive amount of foul language and two scenes of sexual nudity. Even worse, perhaps, the Christian therapy center’s leaders are portrayed as gullible fools who are making their therapy up as they go along, and as emotionally abusive legalists bent on programming people to hate themselves.

Based on a novel, THE MISEDUCATION OF CAMERON POST may dispel a couple false notions about homosexual behavior, but its open mockery and ridicule of the Bible, faith and Christians who think homosexual behavior is evil is abhorrent. The fact that it contains strong amounts of obscene, explicit lewd content makes it even more abhorrent.