"Finding Jesus in the Most Unlikeliest of Places" 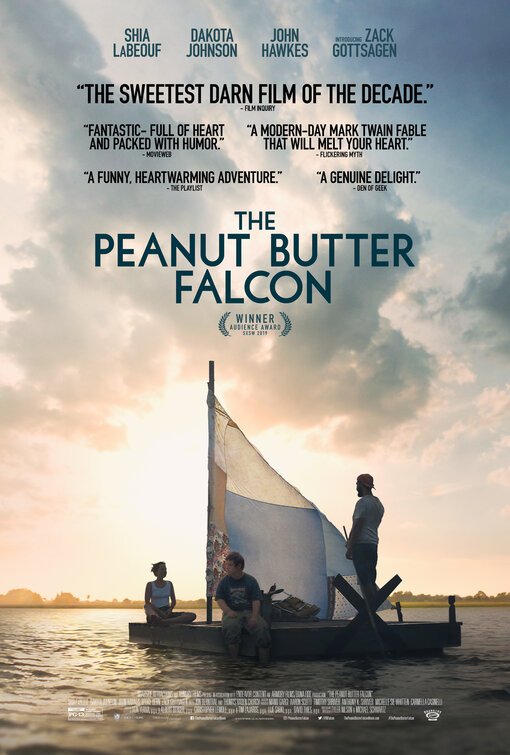 THE PEANUT BUTTER FALCON is the story of two men, one prone to criminal behavior and the other a man with Down’s Syndrome seeking to escape assisted living, who embark on a journey together on a small boat.

THE PEANUT BUTTER FALCON is the story of two men. Tyler is a man of normal intelligence, a shady fisherman who’s prone to criminal behavior. The other man, Zak, has Down’s Syndrome. Zak’s been forced to live in an assisted living facility since his parents died almost three years ago. He wants to meet his hero, a wrestler on TV nicknamed Salt Water Redneck. After Zak escapes from the facility, he accidentally ends up with Tyler on Tyler’s small boat. Zak begs Tyler to take him down river to Salt Water Redneck’s wrestling school.

(CC, BB, Ab, Ro, LLL, V, N, AA, D, M):
Dominant Worldview and Other Worldview Content/Elements:
Strong Christian, moral, redemptive worldview where a shady fisherman is transformed by his friendship with a man who has Down’s Syndrome includes some gospel songs and songs with Christ-centered lyrics and scenes where a character talks happily about Jesus and faith as he hosts three people for a night before baptizing one man in a river the next day, marred by too much foul language and some Romantic elements concerning a personal dream to become a professional wrestler;
Foul Language:
34 obscenities (including one “f” word) and two GD profanities;
Violence:
Light violence includes man sets fire to a $12,000 pile of equipment, and the men who own that punch him and are heard kicking him from offscreen before he’s shown gasping, men point guns at each other but don’t shoot, wrestling violence is shown in brief bursts, and one wrestler briefly starts trying to really hurt a wrestler with Down’s Syndrome;
Sex:
No sexual content;
Nudity:
Upper male nudity in some scenes includes a scene where a man with Down’s Syndrome is shown comically in his white brief underwear as he escapes the assisted living home where he lives and then he runs through a neighborhood’s streets in the underwear;
Alcohol Use:
Social drinking in a couple scenes, and a man with Down’s Syndrome is challenged to get drunk and is comically scene afterwards swaying and slurring his speech;
Smoking and/or Drug Use and Abuse:
One man smokes casually a few times in the movie; and,
Miscellaneous Immorality:
An unethical man who’s behaved shabbily all his life sets fire to a pile of expensive boating and fishing equipment and regularly steals crabs by fishing in waters wherein he’s not licensed and then laughs at hurting the business of his competitors, but he’s transformed into being a better person by a man with Down’s Syndrome whom he befriends.