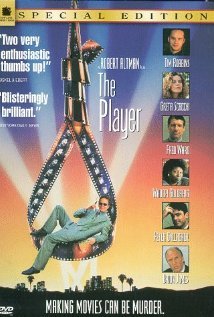 THE PLAYER is an extraordinarily clever satire on the "creative process" (i.e., wheeling, dealing, shmoozing, and politicking) involved in modern Hollywood film production, wrapped around a mystery/thriller storyline. While witty and well-crafted, this long look at Hollywood's dark side includes a fair amount of harsh language, some nudity and portrayals of sexual immorality. Nevertheless, those interested in the slippery mechanics of modern movie making will find THE PLAYER an engrossing experience, but others will find it as repulsive as Hollywood itself.

Director Robert Altman’s THE PLAYER is a clever satire on Hollywood film production. In it, Griffin Mill is an executive at a major studio. A steady stream of writers “pitch” their story lines, which he wants condensed to “25 words or less.” From those concepts come million dollar gambles, and his job is to hit cinematic home runs. Also, he must curry favor with the stars and directors and second-guess Larry Levy who is gunning for his position. Furthermore, Griffin starts receiving threatening cards from a writer he “never got back to.” Griffin tracks down a suspect, but a scuffle results in manslaughter, though there are no witnesses. Griffin gets away with the crime in a satirical send-up of the contrived happy ending. Here Griffin is rich, secure and satisfied–and also mean, smug and pompous, even as he deals with a blackmailer.

THE PLAYER may be more entertaining to film buffs than mass audiences. Regrettably, it includes harsh language, nudity and sexual immorality. With those cautions, and fair warning that this film’s purpose is expose rather than role-modeling, anyone interested in the slippery mechanics of modern filmmaking will find THE PLAYER an engrossing experience, but others will find it as repulsive as Hollywood itself.