"Teamwork, Courage, Unity Save the Day" 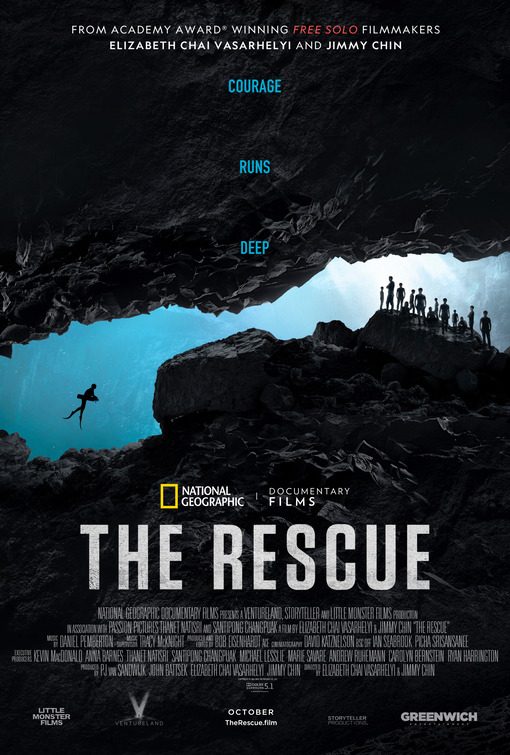 THE RESCUE is a documentary, streaming on Disney+, about the heroic 2018 effort to rescue 12 boys and their soccer coach from one of the largest caves in Northern Thailand after it was flooded in a monsoon. Over the course of two weeks, cave divers, Thai Navy Seals, US Military personnel, and hundreds of volunteers work to overcome seemingly impossible odds. Two British cave divers are called to help. Led by them and the determination of the Thai Navy, a risky plan is devised to sedate the children and swim 2.5 miles through dangerous flooded caves.

THE RESCUE is an intense, scary, inspiring, story of teamwork, persistence, courage, and sacrifice. The documentary format captures the event’s tension and severity in a detailed, engaging way. It highlights the many moving parts and heroic courage of the cave divers. Sadly, the inspiring story is marred by Buddhist, pagan elements. For example, a Buddhist monk and prayers to a mountain goddess are credited instead of God. MOVIEGUIDE® advises extreme caution due to this false theology, the real-life story’s intensity and several obscenities in THE RESCUE.

(BB, C, PaPa, FRFR, L, VV, N, A):
Dominant Worldview and Other Worldview Content/Elements:
Strong moral worldview stresses teamwork, unity, sacrifice, courage, and persistence, but is marred by pagan elements and false religion such as a description of a mountain goddess whose hair is the river, a Buddhist monk arrives on-site and prays to a false god, bracelets are given to the boys that are blessed by the Buddhist monk, but a man calls them BS
Foul Language:
Several obscenities such as a “d” word, a man calls bracelets blessed by a monk BS, and several uses of the phrase “you’ve got to be sh***ing me”
Violence:
Intense peril involving children, visual and verbal descriptions of the dangers faced by the rescue team and children, a man dies by drowning trying to save the children (this isn’t graphic but it is intense), a pagan depiction of how the caves and the mountains were formed include an animated suicide and murder, and despite the intense peril and claustrophobic scenarios, the movie concludes in an uplifting, hopeful way
Sex:
No sex
Nudity:
Brief upper-male nudity, non-sexual Alcohol Use/Abuse: The divers share a bottle of whiskey after successfully rescuing the 12 children and the coach; and,
Smoking and/or Drug Use and Abuse:
No smoking or illegal drugs, but sedatives are administered by a doctor to sedate the children to rescue them; and,
Miscellaneous Immorality:
Nothing else objectionable.

THE RESCUE highlights the inspiring 2018 rescue of 12 boys and their soccer coach from a flooded cave in Northern Thailand during monsoon season.

The events quickly made national news when the soccer team and their coach we reported missing in the caves after rainfall resulted in the flooding of the cave. The documentary highlights the panic that ensues, and the work of the Thai Navy Seals and hundreds of volunteers that jumped into action.

The boys and their coach were trapped, and presumed dead, in the Tham Luang cave system, one of the longest in Thailand. The Thai government called two professional British cave divers, Rick Stanton and John Volanthen, to look into finding the missing group.

The documentary highlights the logistics between the Thai government and the foreign experts, as well as the chaos around the entrance of the cave. Real footage from the rescue is used, as well as many of the national news stories which followed the cave rescue events.

At one point in the movie, Stanton and Volanthen believe that there is little chance the boys and coach have survived, but due to the insistence of the Thai Navy Seals, they agree to persevere and keep searching for the group of missing boys. Eventually, 2.5 miles from the cave entrance, Stanton and Volanthen make contact with the boys and capture the surreal experience on camera.

However, as the documentary expertly depicts, finding the boys was actually the easiest part of the rescue. With poor equipment and little experience, several Thai Navy Seals end up getting stuck at the same point in the cave as the boys.

In an against-all-odds effort, Stanton and Volanthen assemble a team of the best cave divers from around the world and a doctor. They agree to a risky rescue operation involving sedating the boys and swimming them to freedom.

THE RESCUE is an intense, scary, but ultimately inspiring, story of unity, teamwork, courage, persistence, and sacrifice. The documentary format captures the event’s tension and severity in a detailed, engaging way. It highlights the many moving parts and heroic courage of the cave divers. Sadly, the inspiring story is marred by Buddhist, pagan elements. For example, a Buddhist monk and prayers to a mountain goddess are credited instead of God. MOVIEGUIDE® advises extreme caution due to this false theology, the real-life story’s intensity and several obscenities in THE RESCUE.