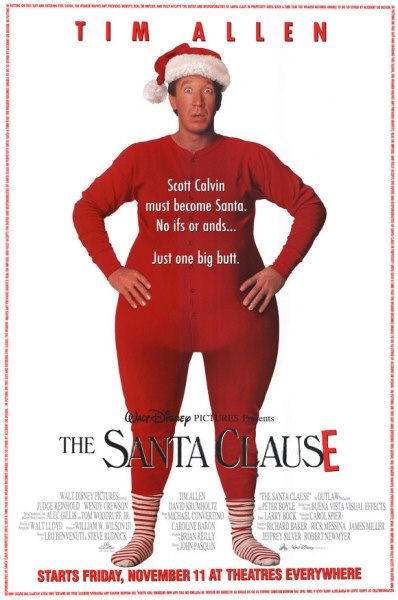 It's late Christmas Eve and up on the roof there arose such a clatter that Scott Calvin and his son Charlie awake just in time to be swept up in a magical fantasy aboard Santa's sleigh in THE SANTA CLAUSE. Tim Allen is a divorced dad trying to salvage his relationship with his young son when he experiences an abrupt career change involving a big red suit and weight gain. If you explain to your children the difference between fantasy and the Truth, then they can enjoy this truly delightful adventure fantasy which is definitely an uplifting experience.

Ted Baehr's discernment point: THE SANTA CLAUSE is fun, lightweight fare which does not teach magical thinking or New Age beliefs. However, Christians do not want their children confusing the Truth of Jesus Christ with the myth of Santa Claus, nor do we want Christmas held hostage by pagan mythology. Therefore, although this movie is innocuous, it is important to explain to our children the difference between fantasy, which can teach some good moral lessons, and the Truth, which sets them free from the bondage to the corruption of our age -- including the inherited corruption of sin, the penultimate disease afflicting mankind. Helping our children understand the Truth, will give the discernment they need to see and enjoy THE SANTA CLAUSE without conforming to the mindset of the fallen world.

THE SANTA CLAUSE poses the question: Is there anything really wrong with little children enjoying a movie about Santa Claus? No more so than them enjoying a book about talking animals (THE CHRONICLES OF NARNIA), if parents have taught them the deeper Truth of Jesus Christ.

(NA, L, V, A, PC, B, M) Light fantasy worldview in which Santa Claus exists if you believe; 1 mild obscenity, 4 mild exclamatory profanities, 2 flatulence jokes, & a few mildly crude remarks; brief, mild slapstick violence -- man falls off roof; brief, implied alcohol use by adults at party; and, 1 brief politically-correct allusion to family unit including both father & step-father; a father-son relationship is restored; and, man lies to ex-wife about being late.

It’s late Christmas Eve and up on the roof there arose such a clatter that Scott Calvin and his son Charlie awake just in time to see a red-suited man fall off their roof and into the snow in THE SANTA CLAUSE. Together the two are swept up in a magical fantasy when they climb aboard Santa Claus’ sleigh. Tim Allen stars as a divorced dad trying to salvage his relationship with his young son. Although they soon find out where the sleigh is going, Scott does not yet realize that he is in for an abrupt career change involving a big red suit and weight gain. The card he took from Santa’s pocket contained some fine print … a “clause,” if you will. The red suit now belongs to Scott, and the job description, well … you can imagine!

THE SANTA CLAUSE is a delightful adventure fantasy. While admittedly feel-good, light-weight fare, the movie is definitely an uplifting experience even for adults. Children squealed with delight at the sight of Santa Claus, as well as during scenes of the North Pole complete with elves played by children and toys galore. Underneath, this movie is about a little boy who loves his dad and believes in him when no one else does. If you explain to your children the difference between fantasy and the Truth, then they can enjoy this fun fantasy without conforming to the myths of our fallen age.

Rent or Buy THE SANTA CLAUSE: