THE TRIP TO SPAIN

"Contrasting a Messy Bachelor Life with a Happily Married One" 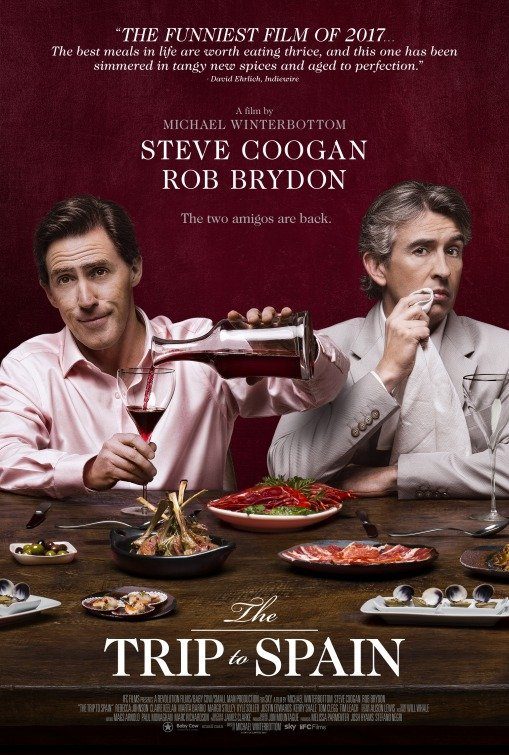 In THE TRIP TO SPAIN, British actors Steve Coogan and Rob Brydon are at it again in their third feature in THE TRIP franchise. After traveling Britain and Italy documenting the culture and food scene, they head to Spain. Steve and Rob are best friends on an adventure. Steve wants to write a book about when he traveled through Spain when he was a boy, while Rob is there to accompany him. During their grand adventure, Steve learns some bad news, proving that life doesn’t end when you go on vacation.

THE TRIP TO SPAIN reads more like a reality TV show where the cameras focus on the improved conversations between the two men at various restaurants in Spain. The witty conversations and dry humor are funny, but viewers who enjoy more raucous, slapstick comedy may find the movie too slow. Extreme caution is advised for brief foul language and Steve’s poor lifestyle choices. However, THE TRIP TO SPAIN is a breath of fresh air for its use of clean comedy and the validation of Rob’s happy married life in contrast to Steve’s.

(BB, Pa, L, S, AA, M) Positive moral worldview where two friends show support, compassion and a genuine love for one another during their travels overseas, men show respect and kindness to the wait staff at restaurants in Spain, but with some questionable elements when man sleeps with another woman and commits adultery but ends up with feelings of emptiness and isolation resulting in a realization that his actions were wrong while his friend has a happy committed marriage; three relatively light obscenities; no violence; man is having an affair with a married woman, 20-year-old son confesses to his father he slept with his girlfriend and got her pregnant; no nudity; wine depicted in almost every scene, men dine at fancy restaurants in Spain and pair their food with wine, men become tipsy and have humorous conversations but no violence, slurs or drunken mistakes, shots of friends drinking beer and wine at restaurants; no smoking or drugs; and, light miscellaneous immorality includes resentment and bad role models.

THE TRIP TO SPAIN is the third feature from the franchise THE TRIP. Director Michael Winterbottom brings British actors Steve Coogan and Rob Brydon together again for their third hilarious adventure abroad. They’ve been to Italy and England documenting the food scene. Now, they’re taking on Spain. The movie is based on a loose storyline and told through improvised scenes, resulting in some superb dry humor.

Steve and Rob, a pair of two 50-year-old men, are headed to Spain so Steve can refresh his mind on the culture and food scene in Spain for his new book. Steve traveled to Spain as a boy and is eager to write a book now about his travels while his best bud, Rob, accompanies him for the trip. The two men pack their bags and travel across country. They wine and dine at lavish restaurants behind back drops of breathtaking views in the city. The camera shows close ups of the cooks preparing the food and then shows the final product on the table giving the viewer a glimpse into the process and skill set needed to prepare authentic Spanish tapas.

Steve and Rob pair all their meals with wine, fully embracing the Spanish culture. They always become tipsy at dinner which results in long, comical conversations about life and people, and ends with each one making impressions of famous people. They do impersonations of Michael Jackson, Michael Caine, Hitler, and a handful of other recognized names that will leave viewers spinning with laughter.

During their trip, Steve gets a call from his literary agent that they are giving his next project, a screenplay to be written, to an upcoming writer instead. Steve is furious and hurt. He feels hopeless under the weight of a writer’s life. How will he make ends meet now? Not long after, he gets a call from his lover that she’s pregnant with her husband’s baby and has decided to stay with him. Next, his son calls to inform him he got his girlfriend pregnant, so he’s going to be a grandfather.

In contrast to Steve’s life, Rob lives a simple stable life. He has a steady job and phones his wife every night before bed. He doesn’t flirt with young woman or lead a promiscuous life like Rob but he has an inner peace within his stable marriage. At the beginning of the movie, it appears Steve has it all, the carefree life of a middle-aged bachelor who can travel anywhere at a moment’s notice, but in the end Rob’s life actually becomes more appealing. He doesn’t go off on wild trips often or sleep with beautiful younger women, but he’s very happy.

The movie ends with a cliffhanger that only another movie can resolve.

THE TRIP TO SPAIN reads more like a reality TV show where the cameras focus on the improved conversations between the two men at various restaurants in Spain. The witty conversations and dry humor are very humorous, but viewers who enjoy more raucous, slapstick comedy may find the movie moves too slowly. THE TRIP TO SPAIN is a breath of fresh air for its use of clean comedy and the validation of Rob’s happy married life in contrast to Steve’s. However, extreme caution is advised for brief foul language and Steve’s poor lifestyle choices.