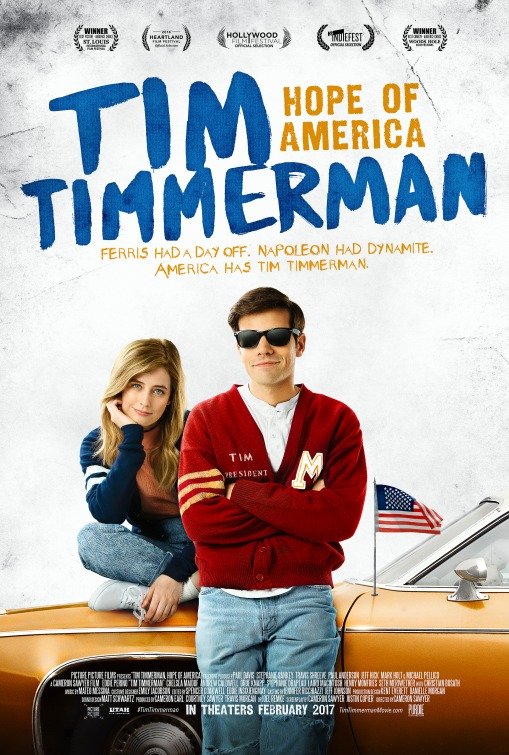 TIM TIMMERMAN, HOPE OF AMERICA tells the story of America’s most selfish teenager who turns his life around when he dates a compassionate girl. Tim Timmerman seems to have everything going for him. He’s student body president and beloved by all the students. However, he’s selfish, uses his friends and shirks his duties. Tim starts dating Sydney, a Senator’s daughter, to win a prestigious award. As Tim spends time volunteering at homeless shelters and schools for the deaf with Sydney, he begins to see the value of doing the right thing.

TIM TIMMERMAN, HOPE OF AMERICA offers some laughs, but falls short of the classic teen movies it idolizes. It is sometimes too obvious and forced, with too many plotlines. However, despite a few light obscenities, a suggestive kissing scene and a reference to marijuana, the movie is relatively clean with a very positive message of honesty and doing the right thing. These positive qualities are rare in most teen comedies. They make TIM TIMMERMAN, HOPE OF AN AMERICA a good comedy for viewers looking for cleaner choices in the teen comedy genre.

(BBB, L, V, S, DD, M) Very strong moral worldview in favor of doing the right thing and being honest; two obscenities (“b*tchin”) and multiple “crap” vulgarities; a dozen lighthearted chase scenes involving a high school game of “assassin” where teenagers shoot each other with pellet guns; brief scene of a couple kissing heavily in the back of a van, and some suggestive moments with teenage boys staring at cheerleaders; no nudity; no alcohol; a character tries to light a marijuana cigarette; and, opening scene involves a prank with a dead animal with breaking and entering and teenagers being out after curfew, and title character often lies to get what he wants in the beginning.

TIM TIMMERMAN, HOPE OF AMERICA is a fun comedy about a high school president only interested in serving himself until he meets a compassionate girl who shows him the importance of selfless leadership. The movie offers a few laughs, but falls short of the classic 1980s and 90s teen movies it clearly idolizes. With a mild PG-13 rating due to brief drug use and a suggestive kissing scene, TIM TIMMERMAN, HOPE OF AMERICA is a mostly clean story with a wholesome message of honesty and doing the right thing.

When the movie opens, Tim Timmerman is on top of the world. He’s the student body president of Mountain Vista High. He just pulled off a great prank of their rival school. He’s beloved by all the students. He has high hopes of attending Yale. Regrettably, Tim doesn’t take anything seriously. He barely has the grades to get into community college, he uses his friends for his own personal gain, and he sweet talks his way out of his presidential responsibilities, including planning the Winter Formal. Tim only cares about winning the school-wide “Assassin” competition, being president someday, and himself.

When Tim finds out that a prestigious “Hope of America” award will get him a summer internship with a senator, he has no problems dating the Senator’s daughter, Sydney (Chelsea Maidhof) to get a letter of recommendation. As Tim spends time volunteering at homeless shelters and schools for the deaf with Sydney, he begins to see the value of doing the right thing and serving as a leader, rather than using positions of power to get ahead in the world.

Can Tim successfully juggle winning Sydney’s heart while getting a letter of recommendation from her father? Most importantly, will he win that school-wide game of Assassin?

In theory, TIM TIMMERMAN, HOPE OF AMERICA has all the elements of the fun, teenage romantic comedies so popular in the 1980s and 90s. The character of Tim is reminiscent of a Ferris Bueller type character, and the movie is even set in 1994 for a full measure of grunge-rock, denim flannel nostalgia. Sadly, though, all these elements don’t create a complete whole. The movie lacks the charm and wacky fun of the best teenage comedies. The nostalgia is obvious and forced, a sign the filmmakers are clearly trying just a little too hard. Although Tim’s goals are clear, he’s almost too selfish to be likable for the movie’s first half. When he finally turns around, the character change feels a bit forced. Finally, because of several different plotlines, the movie often gets lost trying to tell a singular story. As a result, the movie’s humor and overall message suffer.

For all its flaws, however, TIM TIMMERMAN, HOPE OF AMERICA does have a few big things going for it. While other comedies often focus on sex and immorality, Tim Timmerman is relatively clean with a very positive message of honesty and doing the right thing. Tim constantly fails when he serves himself, but he succeeds when he comes clean, tells the truth and does the right thing, even when he thinks it won’t get him anywhere. These positive qualities are rare in most teen comedies. They make TIM TIMMERMAN, HOPE OF AN AMERICA a good comedy for viewers looking for cleaner choices in the teen comedy genre.