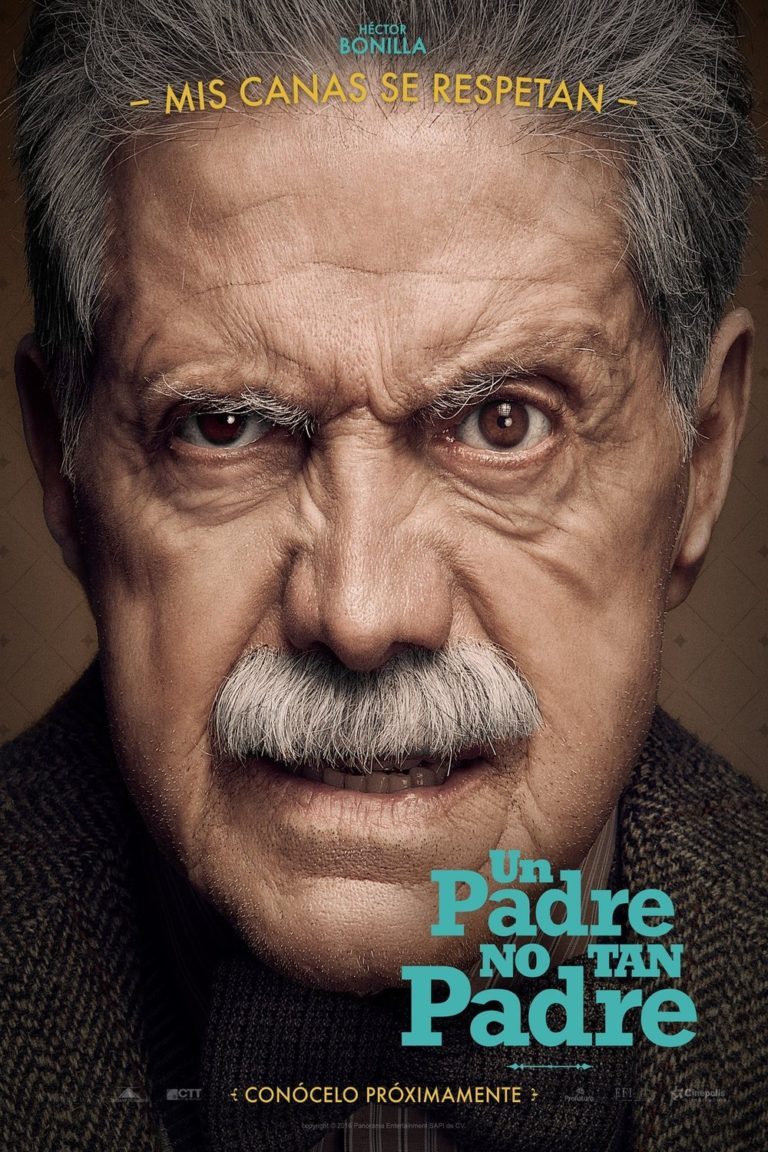 UN PADRE NO TAN PADRE is a Mexican comedy. Servando is an 85-year-old, grumpy widower who sends everyone in his retirement home running away from him. His anger gets him kicked out, forcing his youngest son, Francisco, to shelter him. When they get to Francisco's house, Servando learns his son is living co-op style with eight other people, and that he has a grandson he never knew he had. Servando's conservative, stiff demeanor is out of place in the free-spirited home. However, with nowhere else to go, everyone must figure out how to get along, which seems impossible.

UN PADRE NO TAN PADRE, which translates into “A Not Very Good Father,” is a whimsical comedy about family relationships and dealing with change. The main characters are likeable, and Servando easily inspires compassion for his plight. Despite messages of forgiveness and reconciliation, the movie has a progressive agenda promoting alternate lifestyles and behavior, even if they go against biblical principles. Homosexuality, couples living together, marijuana use, and multiculturalism are all in the forefront. UN PADRE NO TAN PADRE is an excessive, unacceptable movie.

(RoRoRo, PCPCPC, Pa, HoHo, B, C, LL, V, S, NN, AA, DDD, MM) Very strong Romantic, politically correct worldview promoting acceptance of alternative lifestyles and values even if they go against your conservative beliefs includes characters live alternate lifestyles and don't adhere to a biblical moral code, and movie makes a point about the characters being from many different countries and living together under the same roof, homosexual couple is featured heavily with scenes showing public displays of affection, but forgiveness and reconciliation are a large part of the plot, and several scenes include references to church and Catholicism; 11 obscenities include one instance of the “f” word and no profanities; light violence includes a man beats another man with his walking stick, and a man sets a shed on fire and gets trapped inside briefly; implied sex between several unmarried couples, and a homosexual couple is featured; one scene features a nude painting model but only shows partial nudity, a couple other paintings show partial nudity; several scenes depict drinking alcohol or getting drunk; one character grows weed and sells it or uses it for medicinal purposes, plus marijuana brownies are cooked, and people get high from eating them; and, a man is rude to a lot of people, grown children hold a grudge against their father, son kicks his father out of his home, man has a son out of wedlock, an unmarried couple has been living together for 12 years, and several scenes feature characters lying to each other.

In UN PADRE NO TAN PADRE, a Mexican comedy, Servando Villegas is an ill-tempered 85-year-old, stuck in his ways. At the retirement home where he lives, he demands personal service even if it goes against policy, and he sends the workers running whenever they see him coming near.

One of the workers, Rene, is voted as the one to tell Servando that the days of anyone personally waiting on him are over. Servando responds by making fun of Rene’s name, saying it’s not masculine. When another worker tries, he ends up on the floor as Servando pummels him with his cane.

Needless to say, Servando is kicked out of the retirement home for his outburst, while simultaneously finding out that he’s lost all his money due to a banking crisis. Without money to live on his own, Servando reluctantly reaches out to his family for help.

Francisco, Servando’s youngest son, is the only one of four children open to taking in his father. The other children purposely lie, saying they had no room. A flashback shows the Villegas home when everyone was younger, and Mrs. Villegas was still alive. Although Servando was a strict, aloof father, their mother provided the warmth they needed. When she passed away, the house turned into a cold reality. Francisco still received thoughtful gifts from his father for his birthdays, like a bicycle, but he never got the attention he needed. The other children grew up and married quickly in order to leave home, leaving Francisco to fend for himself.

On his way to pick up his father, Francisco reveals to his own teenage son that he’d been lying to his father for years. Servando thinks Francisco’s a single professional living in Mexico City, when his life is actually the complete opposite.

In the car on the way to Francisco’s home, the truth is revealed. When Servando asks his newly discovered grandson what his name is, he replies, “Rene.” This elicits a growl under Servant’s breath, something he makes a habit of doing whenever faced with a disagreeable situation.

Upon arriving at the house, Francisco introduces his father to eight other people, all from different parts of the world, who live co-op style. Servando also meets Francisco’s girlfriend of 12 years, who isn’t Rene’s mother, yet she raises him as if she was.

Servando ends up in the room next door to a homosexual couple, shares the bathroom with a woman who hangs up her underwear to dry, shares a couch with a pot-smoking hippy, and contends with tofu vegetarian dishes. With nowhere else to go, he’s stuck learning how to go along to get along, but tensions slowly rise as his more conservative nature clashes with his “free-spirited” housemates.

UN PADRE NO TAN PADRE, which translates into “A Not Very Good Father,” is a whimsical comedy, analyzing family relationships and dealing with the subject of change as one grows older. Servando easily inspires compassion for his plight, especially after learning he’s a widower, and his family has essentially abandoned him. What used to be a structured, successful life as a younger man, has turned into a lonely, penniless existence. As time has passed, his world has fallen slowly apart. A subplot that gets to the heart of the movie is Servando’s connection to his grandson, Rene. Rene is a talented artist who needs formal instruction to reach his full potential. Though Rene’s father opposes him going to school, Servando supports the idea, and a beautiful portrait of Servando is discovered in Rene’s studio towards the end of the movie.

Despite redemptive messages of forgiveness and reconciliation between friends and family members, and some Christian references, the movie clearly has an agenda to promote the acceptance of alternate lifestyles and morals, even if it goes against biblical principles. Servando is a very conservative, traditional figure who’s clearly outside his comfort zone of what he considers socially unacceptable situations. Though the movie’s disguised as comedy, there’s an underlying message to the more conservative people in the world that they’re wrong to oppose values that differ from their beliefs. Servando eventually comes around by the end of the movie, and the liberal agenda wins. The issues of homosexuality, couples living together outside of marriage, drug use, and multiculturalism are all in the forefront.

All in all, therefore, UN PADRE NO TAN PADRE is an excessive, unacceptable movie.