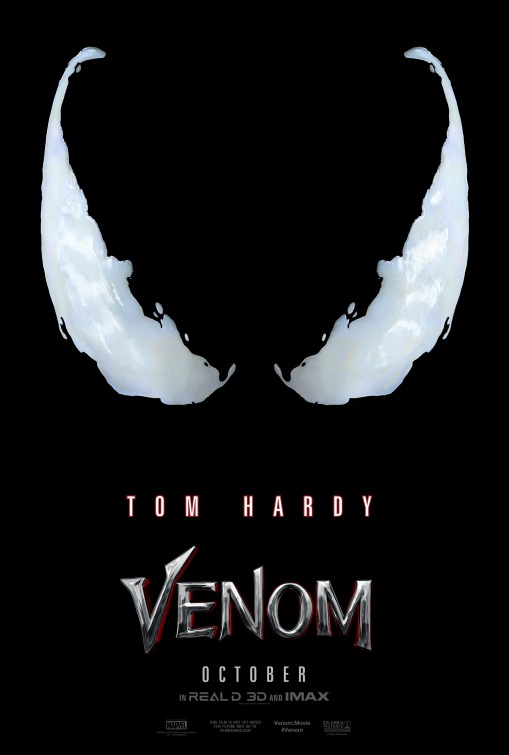 VENOM is an antihero comic book movie. Eddie, an investigative reporter, becomes infected by a powerful alien creature from outer space when Eddie tries to expose an evil billionaire. The billionaire thinks he can save the human race by creating alien-human hybrids able to live in outer space. However, one of the alien creatures, Riot, wants to bring back millions of his alien friends to feed on Earth’s human population. Eddie’s alien parasite, Venom, wants Earth all to himself and Eddie. They must stop Riot from using one of the billionaire’s spaceships, even though Riot is more powerful.

VENOM turns the alien supervillain of 2007’s SPIDER-MAN 3 into an edgy, scary superhero. VENOM has some spectacular action sequences and some sweet humor when Venom meets Eddie’s romantic interest. However, the movie takes too long to introduce Venom, and the acting could be better. VENOM has a strong moral, redemptive worldview with a symbolic death, resurrection and baptism. The human villain is a godless radical environmentalist. These positive elements are spoiled by gratuitous foul language and mostly implied gruesome violence. Extreme caution is advised.

(CC, BB, H, E, Ab, LLL, VV, S, N, A, M):
Dominant Worldview and Other Worldview Content/Elements:
Strong redemptive, moral worldview with a symbolic death, resurrection and baptism and the human villain is a godless radical environmentalist who says God has abandoned mankind;
Foul Language:
About 31 obscenities (including one “f” word and some “s” words), six strong profanities (three using Jesus and three GDs) and nine light profanities;
Violence:
Strong, sometimes scary and implied gruesome violence includes powerful alien creature slams humans around and throws them against objects and through glass, alien creatures invade people’s bodies (sometimes killing them), lots of guns are fired, explosions, two large scary alien creatures fight, it’s strong implied but not graphically shown that large aliens can bite off and eat the heads of people, man is jerked around by alien parasite within him, human is pierced by an ax-looking object, alien creatures scale great heights, alien creatures have rows of scary-looking teeth, cars chase man and alien on motorcycle, vehicles crash into one another, some vehicles flip over and sometimes explode, ambulance flips over, spaceship crashes;
Sex:
Implied fornication in one scene, and couples live together;
Nudity:
Brief upper male nudity;
Alcohol Use:
Brief alcohol use;
Smoking and/or Drug Use and Abuse:
No smoking or drugs; and,
Miscellaneous Immorality:
Villain uses homeless people as human guinea pigs and deceives them into signing release papers.

VENOM is an antihero comic book movie that turns the alien supervillain of 2007’s SPIDER-MAN 3 into an edgy, scary superhero who possesses the body of an investigative reporter to save Earth from an alien invasion. VENOM has some innovative, spectacular action stunts and even some sweet humor, but it’s also too loud, contains plenty of gratuitous foul language and inserts a gruesome subplot about the alien creature biting off and eating the heads of the bad guys.

The movie opens with a human spaceship carrying specimens of alien lifeforms from a comet crash landing in Malaysia. The crew dies, but the spaceship’s owner, a ruthless, godless billionaire environmentalist named Carlton Drake, wants his people to retrieve all the alien lifeforms. However, one of the parasitical lifeforms escapes and possesses the body and mind of a female ambulance driver.

Back in San Francisco, investigative TV reporter Eddie Brock gets a chance to interview Drake, but Eddie’s boss orders him to do a puff piece on the billionaire inventor. Eddie’s fiancé, Anne, just happens to work for Drake. Before the interview, Eddie breaks into Anne’s laptop and discovers that Drake’s pharmaceutical company has been using poor people as guinea pigs, and several of them have died. After a couple puff questions, Eddie starts asking Drake about the deaths. He gets thrown out of Drake’s headquarters and loses his job. Anne loses her job too, and she breaks up with Eddie.

Six months later, Eddie is struggling, and Drake is using the alien lifeforms to possess the bodies of unsuspecting homeless people who “volunteer” to become Drake’s guinea pigs. Drake believes humans are destroying the Earth and thinks the alien creatures can help develop a human-alien hybrids that can move to outer space. Most of the human guinea pigs die in the process of merging with the aliens, however.

Drake’s scientific assistant, Dr. Dora Skirth, thinks Drake has gone too far. She sneaks Eddie into the lab area where the merging with aliens and humans occurs. However, Eddie recognizes one of the humans who have merged with one of the aliens. In the process of trying to free her, the alien creature kills her and merges with Eddie. The creature uses its superpowers to help Eddie escape the lab, but Drake’s henchmen try to chase down Eddie and the creature, who calls himself Venom. At first Eddie doesn’t realize what’s happening to him, but he finally figures it out.

Eventually, the alien in Malaysia possesses the body of a blond-haired American girl, who flies to San Francisco. Calling itself Riot, the alien creature tracks down Drake and possesses him. Riot wants to use one of Drake’s spaceships to travel to the comet and bring back millions of his alien friends so they can return and feed on Earth’s human population.

Meanwhile, Venom, who, like Eddie, is somewhat of a “loser” among his people, decides he wants Earth all to himself. He foresees that, together with Eddie, they can have a great life on the planet working together, but Venom must agree to Eddie’s conditions that Venom won’t go around killing and eating people, except for the occasional “bad guy.” First, however, they must stop Riot from using one of Drake’s spaceships, even though Riot is a stronger, more powerful alien parasite than Venom.

VENOM has some spectacular action. A chase through the streets of San Francisco is particularly exciting. Also, the stakes in the final battle between Venom and Eddie versus Riot and Drake couldn’t be higher. The movie also has some sweet humor, especially when Venom expresses empathy for Eddie’s romantic problems with Anne. “I like her,” Venom tells Eddie after he meets Anne for the first time.

However, it takes a while for the movie to get to the scenes where Venom becomes a real character. Until then, Tom Hardy, as Eddie, sorta mumbles his way through his performance and fails to build up much sympathy for his reporter character. Perhaps, the filmmakers should have gone back to the great journalist characters of the Golden Age of Hollywood for a better, more relatable pattern. Think Clark Gable in IT HAPPENED ONE NIGHT, or Cary Grant and Rosalind Russell in HIS GIRL FRIDAY, or the reporters in MR. SMITH GOES TO WASHINGTON.

VENOM has a strong moral, redemptive worldview that includes a symbolic death, resurrection and baptism. The bad guy is a godless radical environmentalist who, like Thanos in the AVENGERS movies, comes up with an evil solution to solve imaginary environmental crises. His solution puts the whole human race in jeopardy.

These positive elements are mitigated by some objectionable content. Thus, VENOM contains lots of gratuitous foul language and mostly implied gruesome violence. Also, at the end, the human hero allows his alien symbiote to bite off and eat the heads of some people, but only if they’re evil people. It’s not really cannibalism, but it comes close. VENOM isn’t as bad as the DEADPOOL movies, but it warrants extreme caution.