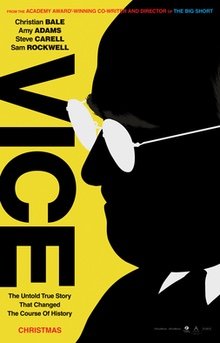 VICE is a satirical drama about Vice President Dick Cheney, his political career and his activities as President George W. Bush’s running mate from 2001 through 2008. The movie tells viewers how Cheney stopped being a drunk in Wyoming in the early 1960s to become a power playing in the Nixon administration in 1969. After serving as Secretary of Defense for President George W. Bush’s father from 1889 through 1992, Cheney manipulates the younger Bush to become Bush’s running mate. Cheney uses the 9/11 terrorist attack in 2001 to falsely wage war against Saddam Hussein’s Iraqi government, resulting in all sorts of misery.

Marxist film theory says revolutionary filmmakers need to use revolutionary techniques to t smash the Hollywood capitalist cinema and promote leftist ideology. Thus, leftist filmmakers should avoid traditional narrative techniques by mixing them with documentary, experimental, whimsical, and satirical techniques. This is what VICE does, but, as a result, the movie’s all over the place, and the acting styles differ widely. VICE paints Cheney in the worst possible light and contains lots of gratuitous foul language and exaggerated, inaccurate accusations.

You don’t have to be a fan of Vice President Dick Cheney, or the controversial policies of the second Bush administration, to recognize that the movie VICE is nothing but a hateful, politically correct piece of Marxist propaganda promoting an extreme leftist view of American politics. Directed by left-wing filmmaker Adam McKay, VICE uses deceitful revolutionary Marxist film techniques to paint Cheney in the worst possible light. Even when Cheney does something good in the jaundiced leftist view of McKay and Company, he turns and does something even worse, to the point of even betraying one of his own two daughters.

Generally, the movie skips back and forth in Dick Cheney’s life to show how he went from being a drunken lout in the early 1960s to being the most powerful man in the country under President George W. Bush. After a second DUI arrest in 1963, Dick’s wife, Lynne, tells him to straighten out or she’ll find a better man. Dick clearly loves Lynne, so he does just that (in actual fact, however, they didn’t marry until 1964, a year after the second DUI arrest!).

In 1969, Cheney becomes a Congressional intern and joins the staff of Donald Rumsfeld in the Office of Economic Opportunity for the Nixon Administration. As the movie explains, Cheney eventually went on to become White House Chief of Staff, the youngest ever, under President Gerald Ford in 1975, after Rumsfeld became Secretary of Defense. After Jimmy Carter defeated President Ford in 1976, Cheney was elected to the House of Representatives in 1978. Vice President George Bush appointed Cheney Secretary of Defense in 1989 after Bush won the White House.

Then, President Bush’s son, George W., reaches out to Cheney to serve as his Vice President. According to the movie, Cheney hesitates, agreeing to help head the search team for a Vice Presidential candidate. In reality, however, Cheney maneuvers himself into the position, while making sure that he and his staff control the key positions in the Bush White House.

The movie also claims that Cheney eventually uses the attack on the World Trade Center in 2001 to: 1) Manipulate the evidence regarding Saddam Hussein’s WMD programs and his alleged connection to al-Qaeda terrorists to maneuver President Bush into starting the Iraq War; 2) Hide from Pres. Bush the evidence of increased terrorist activities by the Muslim terrorist in Iraq who became the founder of ISIS; 3) Start the National Security Administration’s surveillance program of U.S. citizens; and, 4) Illegally maneuvered the American government into allegedly using torture as a means to interrogate terrorism suspects.

VICE uses a combination of satire, documentary filmmaking, exposition, experimental, and dramatic narrative to slam its subject, Dick Cheney. This is typical “revolutionary” Marxist film technique. Marxist filmmaker and film scholar critic Peter Wollen advocated for the use of such techniques all the way back in the 1970s. In an influential article, Wollen argued that a truly revolutionary Marxist cinema should use a revolutionary technique to take apart and smash the traditional style and themes of Hollywood capitalist cinema and create a new Marxist cinema for moviegoers so they will think more critically and join the cause. This is what Director Adam McKay does in VICE, where he mixes disparate film techniques from documentary filmmaking, dramatic narrative, satire, and experimental filmmaking to present a Marxist, leftwing polemic of American politics.

Sadly, however, the satire often clashes with the movie’s dramatic, documentary filmmaking. It’s also over the top. This is especially true in Steve Carrell’s unconvincing, bizarre portrayal of Donald Rumsfeld, which doesn’t match the careful method acting of Christina Bale’s Dick Cheney. Bale does a good job imitating Cheney’s personality, but Carrell never matches the funny, dry wit of the real Rumsfeld. It’s a cartoonish, unrealistic performance that undercuts the movie’s political points. Amy Adams also doesn’t come off too well as Cheney’s wife, Lynne. Also, the usually reliable Sam Rockwell is mostly only given scenes that make the movie appear like a strange Saturday Night live skit. In another satirical scene, the movie imagines Cheney and his wife reciting Shakespeare’s MACBETH. The scene adds nothing to the movie and comes across as just another example of exaggerated, inane, bizarre leftist propaganda.

In his movie, McKay also inserts some expository material that sometimes comes across as pretentious.

For instance, the movie’s first half gives viewers a virtual essay on Cheney’s belief in the Constitutional doctrine called the Unitary Executive Theory. The movie’s explanation for this theory comes off as rather dry and pretentious. It’s also rather one-sided, to the point of being false. The theory says that Article II of the Constitution gives the President the power to control the executive branch. The movie makes the theory sound extremely sinister. It also makes the theory sound as if Dick Cheney and legal experts made the theory up out of whole cloth. However, the fact is, the Founding Fathers did indeed give the President the power in the Constitution to control the executive branch, but within the limits established by legislation passed by Congress and signed by the President. Thus, the President has the right and the power to direct the policies of executive branch agencies and the right to hire and fire people in those agencies, but that doesn’t make him a dictator, as this movie tries to suggest. It would take a Constitutional Amendment to change the unitary executive powers in Article II of the Constitution, but making such a change runs the risk of upsetting the balance of power between Congress and the President. Thus, McKay’s presentation of this doctrine is totally disingenuous. In fact in the movie itself, McKay seems most perturbed that Vice President Cheney and President Bush use the doctrine to make controversial decisions in waging the War on Terror, but it is exactly in such wartime areas having to deal with the President’s role as Commander in Chief that the supreme use of the Unitary Executive Theory makes the most sense and has the most constitutional justification.

Most egregiously, the movie totally blames Cheney for all the deaths suffered in Iraq during the Iraq War. Saddam Hussein and the Muslim terrorist insurgents had a lot to do with most of those deaths, however. In addition, the movie exaggerates the number of deaths during the Iraq War, using one of the highest figures. Also, the movie totally blames Cheney for all the murders committed by ISIS Muslim extremists in subsequent years, but most of those murders occurred during the two terms of President Barack Obama, especially when Obama pulled all the American troops out of Iraq. Thus, it could be argued that Cheney and President Bush, on the whole, did a good job winning the Iraq War and keeping the peace, and it is President Obama who should be held accountable more than they. The movie also exaggerates these numbers, up to twice as much.

Finally, VICE repeatedly claims that all conservative voters are stupid, ignorant, mean, and easily manipulated by evil people like Dick Cheney and incompetent boobs like President George W. Bush. American conservatives don’t care about facts, the movie argues, but lefties like Adam McKay and their supporters do. This is a typical left-wing, Marxist argument.