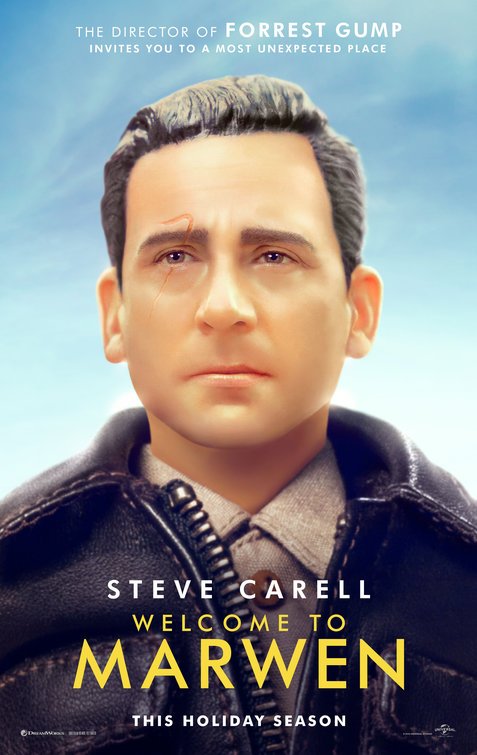 WELCOME TO MARWEN is a drama based on the life of Mark Hogancamp, a photographer of World War II miniatures. Hogancamp was beaten almost to death after he told five men at a bar that he likes to wear women’s high heels. The beating left Hogancamp with no memory of his life before the incident. To cope, Hogancamp has reconstructed a miniature Belgian town he calls Marwen. He’s filled his town with World War II toys and dolls that he dresses up to recreate the era. The women in the town help Hogancamp’s alter-ego fight Nazis.

WELCOME TO MARWEN doesn’t quite jell. Though meticulously crafted, the animated sequences with the dolls sometimes seems inserted haphazardly into the movie’s live-action sequences. Also, the live-action scenes go from being rather flat to being freakishly jarring. Of course, there’s no excuse for the men who beat up Mark Hogancamp. WELCOME TO MARWEN, however, was clearly made as a politically correct, real-life fable to defend and normalize cross-dressing. The movie also has some strong foul language and brief nudity, along with some rather strong violence.

(RoRo, PCPC, HoHo, AbAb, Pa, O, C, LL, VVV, SS, NN, AA, DD, M):
Dominant Worldview and Other Worldview Content/Elements:
Strong Romantic, politically correct worldview normalizes cross-dressing, which is condemned by the Bible, plus protagonist has a lustful, voyeuristic pagan attitude about seeing female breasts, and one character is an evil witch, mitigated slightly by some Christian elements that include images of a miniature church in a miniature town, one character wearing a crucifix is seen exiting a church, and protagonist visits church where he talks to Jesus, but his prayer isn’t answered positively;
Foul Language:
19 obscenities (including an “s” word in German), three strong profanities, one OMG profanity, and several references to villains using a homosexual slur;
Violence:
Very strong and strong violence includes doll characters brutally hit by machine gun fire, one doll character is cut into two and then his torso impaled, it’s implied that a male doll has been whipped by Nazi soldiers, live action character suddenly imagines being shot, one fantasy scene shows men shooting people to death in a court room, flashbacks of five men beating a man unconscious, a toy plane is animated as if it crashes, a couple other war battles with guns;
Sex:
Movie promotes and normalizes cross dressing and protagonist has a voyeuristic obsession with naked female breasts;
Nudity:
Images of upper female nudity on dolls and realistic drawings of women with their tops off are shown in one scene, plus a scene with partial rear female nudity;
Alcohol Use:
Alcohol use and drunkenness in a flashback;
Smoking and/or Drug Use and Abuse:
Man smokes and abuses his prescription pills for mental health, but he places the blame on a character who doesn’t exist; and,
Miscellaneous Immorality:
Issues of trauma and mental health, protagonist says women are the saviors of the world, and vulgar bully harasses woman and her friend, mocking the man’s obsession with photographing toys.

WELCOME TO MARWEN is a drama based on the life of Mark Hogancamp, a photographer of World War II miniatures who was beaten almost to death after he told five men at a bar one night that he likes to wear women’s high heels. WELCOME TO MARWEN is a weird hybrid of Cross-Dressing Machismo where Hogancamp envisions a town in Belgium during World War II where his alter ego, a doll resembling a GI Joe action figure, and five female dolls fight dolls dressed up as Nazi soldiers.

The movie opens with an animated sequence featuring action figures with realistic looking eyes and mouths. Hogancamp’s alter-ego, an American pilot named Captain Hoagie, crashes his plane and discovers a crashed Nazi jeep. In the jeep is a suitcase full of women’s lingerie and a black-and-white stiletto pump. Because his own boots are ruined, Hoagie puts on the women’s shoes and walks down the road, somewhere behind enemy lines in Belgium. Hoagie doesn’t get very far when he’s attacked by Nazi soldiers, who laugh at the women’s shoes he’s wearing and start beating him. Just when they’re about to shoot him dead, the Nazi soldiers are cut to pieces from machine-gun fire by five female action figures.

Cut suddenly to Hogancamp himself photographing the scenario viewers just watched. He poses his action figure dolls, dressed up in World War II uniforms and clothing, as they act out dramatic scenarios he’s invented.

In short order, viewers learn that several years ago, Hogancamp was beaten mercilessly by five thugs. The ringleader sported a Swastika tattoo on his right arm. To cope with his physical and mental injuries, which wiped out his memory, Hogancamp has reconstructed a miniature Belgian town he calls Marwen. He’s filled his town with World War II toys and dolls that he dresses up to recreate the era. The women in the town help Hogancamp’s alter-ego fight Nazis, but they sometimes are magically stopped by a doll with blue hair and a blue glove that the artist names Deja, who has magical powers.

This coping mechanism only goes so far, however. Every once in a while, Hogancamp is startled by a disobedient Nazi who resembles the leader of the gang that beat him, or by a report on TV about the thugs, who are scheduled to be sentenced in a few days by a judge. The prosecutor wants Hogancamp to testify at the sentencing hearing, but Hogancamp is still too traumatized.

Meanwhile, a red-headed woman named Nicol moves in across the street. Hogancamp is immediately smitten, and they strike up a friendship.

Will Hogancamp find the courage to romance Nicol and testify at the hearing against the men who destroyed his life?

WELCOME TO MARWEN is a weird hybrid of cross-dressing machismo. The World War II scenarios envisioned by Hogancamp and occurring in the movie seem like something out of a hardboiled war movie from the 1940s. A lot of brutal violence and thrilling action sequences occur, all accompanied by the tough patter of the movies of that period. In addition to this, it’s clear that Hogancamp has a lusty masculine attitude toward women’s bodies. Some of the photographs and animated sequences of the female dolls show the dolls with bare breasts. Also, one scene shows previous drawings by Hogancamp of half-naked women. At the same time, even Hogancamp’s alter-ego sometimes wears women’s high heels during the movie’s animated sequences. Finally, at one point, Hogancamp admits to Nicol he has more than 200 pairs of women’s shoes form his closet that he likes to wear.

Of course, there’s no excuse for the men who beat up Mark Hogancamp and destroyed his memory. In real life, they sadly got off lightly for this horrible crime. WELCOME TO MARWEN, however, was clearly made as a politically correct, real-life fable to defend and normalize cross-dressing. As God tells the Hebrews in Deuteronomy 22:5, “A woman shall not wear men’s clothing, nor shall a man put on women’s clothing, for whoever does these things is an abomination to the Lord your God.”

WELCOME TO MARWEN also contains some strong profanities. In addition to brief nudity, some of the violence in the movie is rather strong. For example, several times the Nazi dolls’ bodies are literally torn apart by machine-gun, and one Nazi soldier’s body is cut in two. In another scene, Hogancamp imagines Nazis invading a court room and shooting everyone in cold blood.

All in all, WELCOME TO MARWEN doesn’t quite jell together. Though the animated sequences with the dolls are meticulously crafted, they sometimes seem to be inserted haphazardly into the movie’s live-action sequences. Also, the scenes with Hogancamp trying to cope with everyday life and the trauma he underwent go from being rather flat to being freakishly jarring.