WHEN WE WERE KINGS 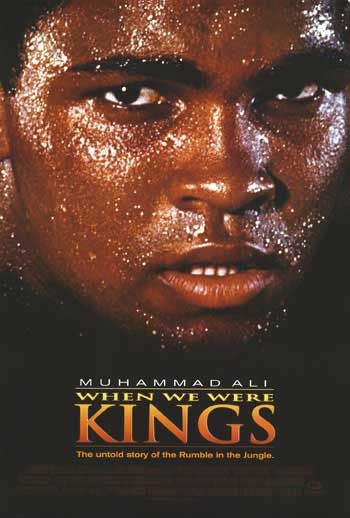 WHEN WE WERE KINGS highlights the "Rumble in the Jungle" in 1974 between Mohammed Ali and George Foreman . Containing actual footage and interviews, it acts as a good primer to the young who never knew the antics and physical performance of this great fighter. This movie contains some boxing violence, a few obscenities, brief upper female nudity, some blasphemy, and some mention of the Islamic god, Allah.

TNT originally broadcast WHEN WE WERE KINGS as a television special, but viewer admiration was so high that they decided to release it as a theatrical film so it would be eligible for Oscar consideration. This documentary is about the classic 1974 “Rumble in the Jungle” between Muhammad Ali and George Foreman in Africa. The film has a strong linear narrative with actual footage. Additionally, we see interviews with filmmaker, Spike Lee, and writers Norman Mailer and George Plimpton and various other participants at the event.

This movie will serve as a reminder to those who knew of Ali in his prime, and for the young who never got to know the American legend. Ali’s antics act as the comedic anchor of the movie. The movie bogs down when it explores some of the musical events that surrounding the fight. During a musical number, a woman dancer exposes herself briefly, and Ali blasphemes God when he says to Foreman , “How are you going to beat God’s son?” Jesus is the only begotten Son of God, which even Muhammad acknowledged. While true that we can do all things through Christ who strengthens us, God is more interested in our salvation than our performance in physical competitions.