WHERE THE DAY TAKES YOU 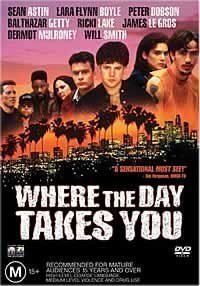 WHERE THE DAY TAKES YOU is an unflinching look at the lives of runaway teens in the ugly shadows of Hollywood. It is both riveting and appalling, expertly presented but often excruciating to watch. Even though it is not at all entertaining (and contains both profuse obscenity and horrifying drug abuse), anyone considering ministry work with runaways should consider viewing this film. For that matter, any kids toying with drugs will find this film an eye-opening and sobering experience.

(B, C, LLL, VV, N, S, D) A realistic look at the lives of runaway teenagers in Hollywood with a strong moral point and a closing quote from Jesus Christ as well as: approximately 180 obscenities and 8 profanities; two shootings; man viciously beaten; brief nudity, obscured by shower door; sexual immorality and references to prostitution, both heterosexual and homosexual; strong scenes of IV drug shooting and its consequences; drinking and smoking; and, theft and vandalism.

In WHERE THE DAY TAKES YOU, writer/director Marc Rocco looks at the lives of runaway teenagers in Hollywood. King, just released from jail, is a father figure for a small “family” of runaways. Only some of these kids are rebels without causes. A large number have fled from severe emotional, physical and sexual abuse at home. However, they still gather in small groups which become their “families.” In the end, there is no visible hope for these characters. Greg dies of an overdose, King is mortally wounded in a tragic shootout, and Little J. cycles into the juvenile justice system. After fading to black, silently on the screen come Jesus’ words from Luke 18: “Suffer the little children to come unto me.” These people–beaten, bedraggled and lost–are children for whom Jesus died, and they desperately need to come to him.

According to director Marc Rocco, 10 percent of this film’s income will be given to support the work of shelters for runaway teens. Even though it contains harsh language, graphic drug abuse and violence (though little sexual content), anyone considering ministry work with runaways should consider viewing WHERE THE DAY TAKES YOU.