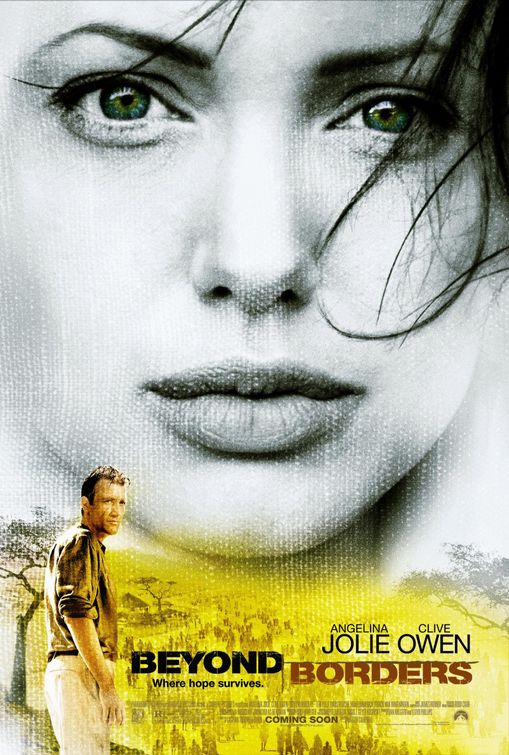 BEYOND BORDERS is an epic tale of the turbulent, adulterous romance between a relief worker/doctor and a married American lady, set against the backdrop of the world's most dangerous hot spots. BEYOND BORDERS will compel audiences to deeply reconsider their own materialism and lack of giving, but the humanistic tone of relief efforts without God or Christ is depressing, ignorant and ultimately hollow.

(HH, PC, ACap, AP, Pa, FR, BB, Co, AC, LLL, VVV, SS, A, D, M) Humanist worldview portraying beautiful humanitarian efforts apart from God or Jesus Christ, with some politically correct, anti-capitalistic sentiments disparaging businessman with a foundation who doesn’t understand starvation and poverty up close, and some anti-patriotism with disparaging remarks about lack of U.S. funds, interest, and involvement in poverty, with portrayals of reliance on the United Nations, positive portrayals of a Buddhist social worker, strong moral elements implicit in the selfless acts of relief workers and helping the needy and destitute, disparaging comments made about organizations that choose to pull out of Communist countries with, however, a negative depiction of the Communist Khmer Rouge in Cambodia; strong language with about 30 light to mild obscenities, 30 strong obscenities, and three profanities; very strong war violence includes shootings, land mine explosions resulting in people losing life and limb, gun-running, kidnapping, and murder; sex includes implied adultery and one depicted adulterous sex scene (but not graphic or explicit); no nudity; alcohol use; smoking; and miscellaneous immorality such as gun smuggling and some moral relativism.

BEYOND BORDERS is an epic tale of the turbulent romance between a relief worker/doctor and a married American woman, set against the backdrop of the world’s most dangerous hot spots, such as Ethiopia and Chechnya. Angelina Jolie stars as Sarah Jordan, an American living in London in 1984. She is married to Henry Bauford (Linus Roache), son of a wealthy British industrialist, when she encounters Nick Callahan (Clive Owen), a renegade doctor whose impassioned plea for help to support his relief efforts in war-torn Africa moves her deeply. As a result, Sarah embarks upon a journey of discovery that leads to danger, heartbreak and romance in the far corners of the world.

The movie opens with a woman playing the piano in a beautiful home, and a voice-over saying, “There must be more to this life. . . a purpose for each of us. . . .” The story then moves to a fancy fund-raiser/dance for world relief, with Sarah and Henry enjoying themselves thoroughly at Henry’s father’s gala, Aid Relief International. Suddenly, Dr. Nick Callahan barges in with a little African boy, Jojo, and demands that the wealthy party folks listen to the truth about the disease and death outside their comfort zones. Nick is soon overpowered and escorted off to jail.

Soon, Sarah Jordan is telling her British husband that she will be taking her last 40,000 pounds and traveling to Ethiopia to help alleviate the starvation and disease. Her husband agrees to let her go, and she makes the trip alone. A young, black woman, who says that missionaries taught her to speak English, drives her to a plateau, where she sees a horrendous encampment of poverty, disease and death. Sarah insists that the driver stop the truck. She runs out, grabs a small, dying boy, and has some men help her get the boy’s wounded mother into the truck. The truck gets underway, only to be stopped again by a band of rebels, demanding a large portion of the grain.

After the rebels are paid off, the convoy finally makes it to the campsite, where Sarah meets Nick in person. The locals call him a name that means, “He who steals from death.” Nick is a hard-working doctor, but he’s bitter and foul-mouthed, cynical about the fact that he gets little help from various world organizations, especially America, and he is not impressed with Sarah and her bleeding-heart humanitarian trip. Nick also feels forced to deal with a shady American, Steiger. He feels that he is forced to compromise and run some guns for Steiger in order to get the medicines he needs. He obviously loves the people, however, and says, when Sarah demands that they be given (non-existent) pain relief, “I have seen in these people the weirdest, purest suffering. They are so brave. . . . We have no idea what courage is.”

Sarah’s efforts keep the Africans alive for several days, and then she must go. She asks the doctor why he never uses her name, and he tells her that everyone he’s lost has had a name. If he knows her name, he might have to remember her and then lose her. Nick’s associate is Elliot (Noah Emmerich), a Buddhist who is portrayed as a kind, big-hearted relief worker. Elliot makes Sarah promise she’ll not forget them, and he suggests that she work for the U.N. Relief Organization.

Sarah does join the U.N., has some children with her husband, from whom she is growing apart, and lives through the market crash of 1989 and the falling of the Berlin wall. After her husband has an affair and loses his job, Sarah takes an invitation from Elliot to join the team in Cambodia. There, she is reacquainted with Nick, and the two fall in love. She gets angry with Nick, however, when she finds out that he is smuggling guns, computers, and maps to the refugees, and the Khmer Rouge almost kills both of them. She screams at him, “Never compromise another organization to benefit your own!” The Khmer Rouge invades the camp and terrorizes the people, giving a grenade to a baby and killing his mother when she tries to save him. Eventually, Elliot falls on the grenade and dies.

Sarah’s final trip is to Chechnya, where she must decide whether or not to give up her family in order to rescue Nick, who has been captured by guerrillas. In the process, she witnesses the hideous nature of war and politics in third world countries, shares an amazing secret with Nick, and learns some revealing things about her own heart and character.

BEYOND BORDERS is a gripping movie that will motivate viewers to spend their resources on alleviating poverty in critical areas of the world. Thus, there are some strong moral elements in the movie. Regrettably, however, the characters in BEYOND BORDERS are not motivated from a desire to spread the Gospel of Jesus Christ (which is never even slightly mentionaed), or even the Word of God, the Bible. Rather, their actions spring entirely from a humanist worldview. The movie’s tone, in fact, is biting and cynical toward those who live in comfort and do not see, or want to see, the realities of death and disease in war-torn hot spots of the world. The movie’s official tagline is, “Where hope survives,” but the story shows little evidence of true hope. There are so many casualties of the horrendous conditions of war and poverty that the movie probably will leave many viewers depressed.

As believers, however, we understand that, although offering humanitarian aid is extremely important, it must be accompanied by the feeding of the spirit as well, with an invitation to salvation through the death and resurrection of Christ Jesus. Salvation through Christ, and the implementation of biblical principles for living, will elevate countries to the true freedom they so desire.

The humanistic tone of relief efforts without God or Christ in BEYOND BORDERS is, therefore, depressing, ignorant, and ultimately hollow and hopeless. Other objectionable elements include a storyline involving adulterous affairs, very strong foul language with more than 60 obscenities, and heavy violence.

SUMMARY: BEYOND BORDERS is an epic tale of the turbulent, adulterous romance between a relief worker/doctor and a married American lady, set against the backdrop of the world’s most dangerous hot spots. BEYOND BORDERS will compel audiences to deeply reconsider their own materialism and lack of giving, but the humanistic tone of relief efforts without God or Christ is depressing, ignorant and ultimately hollow.