REQUIEM FOR A DREAM 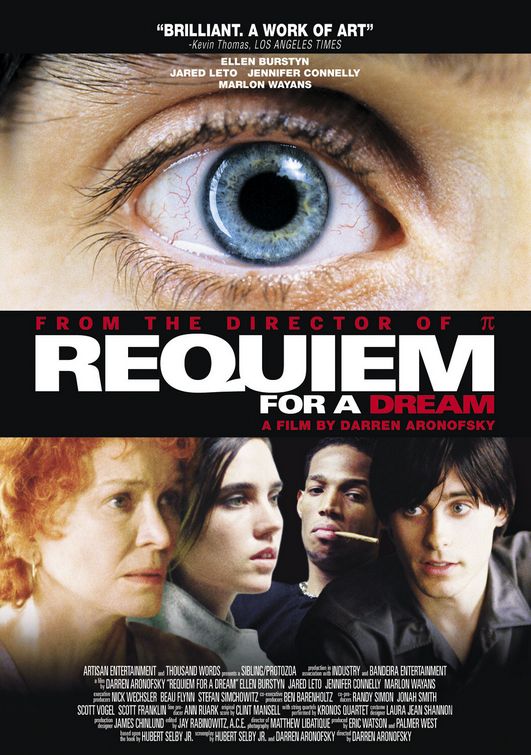 Based on the LAST EXIT TO BROOKLYN, REQUIEM FOR A DREAM opens in Coney Island with the lonely Sarah Goldfarb (played by Ellen Burstyn) watching a TV game show. Her son Harry with his black friend Ty steal her TV and pawn it to get their next drug fix. Sarah gets the TV out of hock. Unexpectedly, she gets a call saying that she has been chosen to be on a television game show. Suddenly, her life is transformed. She goes to find her favorite red dress and discovers that she’s too fat to wear it. Therefore, she goes to a doctor, who gives her diet pills and tranquilizers. Eventually, popping pills, Sarah disintegrates into insanity; Harry ends up in jail with a gangrened arm; Harry’s girlfriend slips into prostitution; and, drugs end up destroying everyone.

REQUIEM FOR A DREAM is a tough, gritty movie. It shows, in excruciating detail, what happens to people who are addicted. This is frightening stuff. Regrettably, the sex, violence and foul language in the movie are excessive. With a little judicious editing, this movie could have been a strong, cautionary tale. As it is, it is excessive.

Based on the famous book LAST EXIT TO BROOKLYN, REQUIEM FOR A DREAM is such a strong anti-drug movie that, with a little judicious editing, it could have been run on television as an overlong government public service announcement against drugs.

Set in Coney Island, New York, the movie opens with the lonely Sarah Goldfarb (played brilliantly by Academy award winner Ellen Burstyn) watching a TV game show, which appears to be a cross between QUEEN FOR A DAY, WHO WANTS TO BE A MILLIONAIRE and a motivational infomercial. Her young son Harry, played by Jared Leto, steals her TV for the umpteenth time while she locks herself in the bedroom to protect herself from him. Harry takes the TV with his black friend, Ty, to the local pawn shop so that they can get enough money for their next drug fix.

Moments later, Sarah shows up at the pawn shop to get the TV out of hock. While watching her favorite show again, she gets a telephone call that she has been chosen to be a contestant on a television game show. The call keeps emphasizing that she’s already a winner.

Suddenly, her drab life is transformed by this opportunity. She goes to find the red dress that she wore at Harry’s high school graduation and that her late husband loved so much and finds out that she’s too fat to wear it. She tries a diet, which doesn’t work. Therefore, she goes to a doctor who gives her diet pills, and then tranquilizers.

Harry, meanwhile, has an upscale girlfriend named Marion. He wants to make enough money selling drugs to set Marion up in her own dress designing business, so Harry and Ty set up their own drug distribution network. Of course, they still sample the drugs. At first, they have some success, and Summer and Fall pass with everything appearing to get better, but by Winter problems arise. Sarah has become addicted to her diet pills and is starting to get paranoid fantasies. Meanwhile, Harry and Ty have run out of drugs to sell. A war between the blacks and the Italians stops the import of drugs. In desperation, they head off to Florida to get drugs. Desperate for a fix, Marion goes to a black dealer who likes sex better than money and is forced into prostitution. Sarah disintegrates into insanity. Their entire lives end up destroyed.

REQUIEM FOR A DREAM is a tough, gritty movie. The director previously directed the movie PI, which seemed to have strong biblical roots. This movie clearly hates drugs. It shows, in excruciating detail, what happens to people who are addicted, and how their lives are ruined. This is frightening stuff.

Regrettably, the director goes overboard. Although he does not glamorize sex or violence, the sex, violence and foul language in the movie are excessive. At the end, Harry’s arm is festering from gangrene, and Marion performs grotesque sex acts for drugs.

With a little judicious editing, this movie could have been a strong, cautionary tale. As it is, as well done as it is, it is excessive.