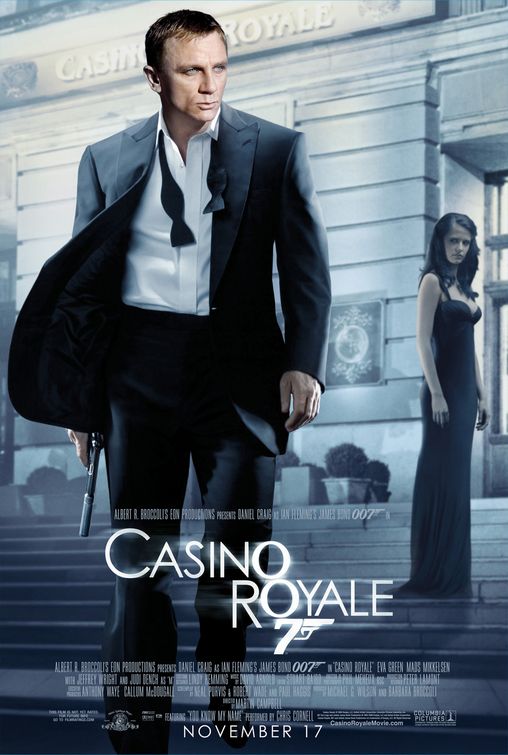 CASINO ROYALE, the new James Bond movie, goes back to the beginning. The movie opens with Bond doing his first two assassinations to earn the Double Oh title and become Agent 007. His first assignment is to stop an evil syndicate laundering money to terrorist groups. After some very exciting, athletic action sequences, he has to play the syndicate villain, a nasty Frenchman, in a high stakes poker game. The plan is to wipe out the villain's funds and force him to reveal all his terrorist and syndicate connections. Of course, the plan does not go as planned.

CASINO ROYALE adds a more serious quality to the Bond franchise that heightens the jeopardy to an exciting level. Daniel Craig as the new James Bond is an excellent addition. That said, the movie is a more adult Bond movie. It has a humanist worldview, brief foul language, sexual content, and strong violence, including a very strong torture sequence. These darker qualities are offset by strong moral and patriotic content. Bond is clearly dedicated to stopping terrorists and saving innocent lives. All in all, MOVIEGUIDE® advises extreme caution for older teenagers and adults.

(H, BB, PP, PaPa, LL, VVV, S, N, A, D, M) Light humanist worldview with some moral relativism and strong moral and patriotic elements as James Bond the British secret agent fights an evil syndicate that funds terrorists, including a positive portrayal of an American spy who helps Bond out at a crucial point, minimized by a strong, immoral, pagan attitude about extra-marital sex; 14 obscenities (including a couple uses of the English word "bloody"), one strong profanity and one light exclamatory profanity; lots of action violence with some blood and a very strong torture scene, e.g., chase scenes, jumping, risking life and limb in high places, point-blank shootings, some implied violence, explosions, an assassination, woman murdered, suicide, two drownings, vehicles crash, and villain viciously hits naked man sitting on chair with a knotted rope on his genitals but the actual hitting is not explicitly shown; mostly implied sexual content such as it is said that hero only likes to seduce married woman, hero passionately kisses married woman on floor but they are interrupted before anything more occurs, implied fornication between unmarried couple, unmarried woman kisses unmarried man's naked chest while they lie on bed, and crude remark may or may not have sexual connotations; upper and side rear male nudity, and female cleavage; alcohol use; smoking; and, miscellaneous immorality such as gambling with taxpayer money to catch an evil crook, villain says he does not believe in God, and moral relativism on the part of the "good guys" because good guys do things that they apparently see as a kind of "necessary evil," such as assassinating bad guys or seducing a villain's beautiful wife.

CASINO ROYALE is arguably the best James Bond movie since the early days of Sean Connery, who originated the role on the Big Screen. As usual, however, there are negative content elements about the movie and its worldview that require extreme caution.

The script for CASINO ROYALE is so good because the owners of the James Bond franchise have decided to go back to the beginning. They turn this movie into the first case that Bond takes on as a new Double Oh spy for Her Majesty’s Secret Service. This makes sense because CASINO ROYALE was actually the first James Bond novel that Ian Fleming, the creator of James Bond, wrote and published. The filmmakers have carefully crafted a modern re-telling of Fleming’s first Bond novel. They have also removed a lot of the campiness from the Bond franchise and given their hero and his ongoing story a more serious quality. This heightens the stakes and jeopardy in their exciting plot, which involves James Bond trying to stop an evil syndicate from laundering money for terrorists.

The movie opens with Bond making his first two assassinations to qualify for the Double Oh title and become Agent 007. His first assignment as 007 is to capture an African man acting as a middleman between the evil syndicate and terrorist groups. After a terrifically exciting chase scene, Bond finds himself trapped in an African embassy. He has to kill the middleman in order to escape.

M, Bond’s boss, is upset about Bond having to kill the middleman, whom she wanted to interrogate. After getting a tongue-lashing from M, Bond follows a clue he got from the middleman’s cell phone. He travels to the Bahamas, where he uncovers another middleman, named Dmitrios. Bond starts to seduce the man’s wife, who tells him that her husband just left on an urgent flight to Miami, Florida. Bond abruptly leaves the woman and follows Dmitrios to Miami, where he uncovers a terrorist plot to blow up the new jumbo jet of a British airline. What Bond doesn’t know yet is that one of the syndicate’s leaders, an evil Frenchman named Le Chiffre, is using terrorist money to short stock on the airline. Thus, when the new plane explodes, Le Chiffre will make a hundred million dollars.

Bond and M uncover Le Chiffre’s connection to Dmitrios. M decides to put Le Chiffre out of business for good. She assigns Bond, the best card player in her agency, to bankrupt Le Chiffre in a high stakes poker game, to be held at Casino Royale in Montenegro. If Bond wins, the British hope to make Le Chiffre an offer he can’t refuse: join them and reveal all his terrorist and syndicate connections, or be killed by the terrorists, who will be very angry when they learn he has lost all their money. If Bond loses, however, the British government will have funded more terrorist murders.

To keep a tight rein on Bond, M teams him up with an agency accountant, a beautiful woman named Vesper Lynd. Vesper has doubts about Bond’s abilities to beat Le Chiffre. Her doubts seem to be confirmed when Le Chiffre appears to outsmart Bond. Bond bounces back, however, and Le Chiffre turns to violent means to make sure that Bond won’t interfere with his plans ever again.

As noted above, CASINO ROYALE adds a more serious quality to the Bond franchise that heightens the jeopardy to an exciting level. Daniel Craig as the new James Bond is an excellent addition to the franchise. Though he’s the shortest of the actors to play Bond, and has blonde features like Roger Moore, he has the gravitas, the style and the vulnerability to play the kind of stylish, athletic and human hero that the Bond franchise requires. Despite being slightly too long and containing a couple plot holes and coincidences, the plot is well-crafted and enthralling. All of these things should make CASINO ROYALE one of the most critically successful and financially successful Bond movies in recent years, if not the whole history of the franchise.

That said, the movie contains some brief foul language, sexual content and strong violence, including a very strong torture sequence lifted almost completely from Ian Fleming’s original novel. Also, as usual, the movie has a humanist worldview wherein Bond engages in extra-marital sex and wherein agents in the British government have to do morally questionable acts in order to protect Queen, Country and innocent lives.

This humanist worldview is mitigated by strong moral content. The movie clearly shows that its hero, James Bond, is deeply committed to stopping terrorism and saving innocent lives. Bond is still a patriot with strong feelings of duty to his country and duty to stopping evil, greedy men and terrorists who threaten the lives of innocent civilians.

Another morally interesting aspect to this particular movie is that Bond and his boss intend to offer the villain a chance to change his evil ways and help them stop terrorism. Ultimately, the villain rejects the offer and schemes to get back his money, but he gets his just desserts.

Conveniently, however, the movie avoids the issue of Islamic terrorism. Although one terrorist looks Middle Eastern or Arab, other terrorists are black Africans. Ian Fleming probably wouldn’t be afraid of addressing such a hot issue. Many of his Bond novels are filled with villains who have links to evil Russian Communists. The Bond movies always seem to de-politicize this aspect of Fleming’s worldview.