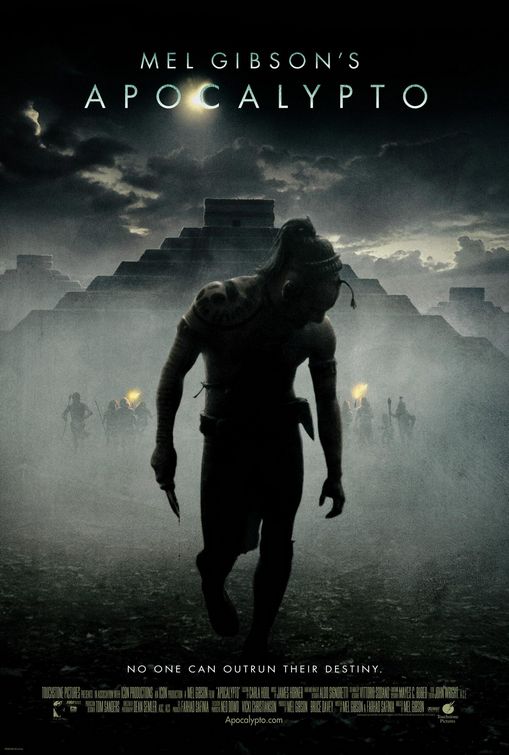 APOCALYPTO means "new beginning." Mel Gibson's latest movie is set in the Mayan Civilization in Central America just before the Europeans arrive. The story focuses on Jaguar Paw, a young hunter in a jungle village. Soon, a band of Mayan raiders sacks his village. They kill many people and take many captives, including Jaguar Paw. Jaguar Paw manages to hide his pregnant wife and their son in the village well. Complicating matters is that the raiders plan on sacrificing all the men captives to their sun god. Only an act of God or Nature can save Jaguar Paw and his family.

In APOCALYPTO, director Mel Gibson provides moviegoers with another fantastic setting to play out bloody acts of courage, fighting oppression and sacrifice. His directing is superb, and the cast, led by Rudy Youngblood as Jaguar Paw, is magnificent. The chase scenes after Jaguar Paw escapes, however, become one long, predictable montage of escapes. APOCALYPTO contains extremely strong, bloody violence, a few crude sex jokes, and brief foul language, including one "f" word. There is very little spiritual content to counter the vague paganism and ancestor worship of the heroic protagonist.

APOCALYPTO, Mel Gibson’s latest movie, has excellent production values, direction and acting, and is set in a unique world that is unlike anything you’ve probably ever seen. The movie is bogged down, however, by the kinds of very violent and bloody action melodrama that audiences have, in fact, actually seen before. A major problem with the action in the movie’s second half is that three important plot problems are solved by Deus Ex Machina. A Deus Ex Machina is a contrived, sudden solution to an apparently insoluble plot difficulty (e.g., a sudden flood from nowhere that kills the villain or a divine intervention that occurs unexpectedly without any reason).

APOCALYPTO means “new beginning.” It is set in the Mayan Civilization in Central America just before the Europeans arrive. It opens with some crude sexual jokes where a group of natives in a jungle village make fun of another native’s inability to produce children with his wife. They play practical jokes on the young man after they snag a wild pig.

Jaguar Paw, the son of the leading hunter, suddenly hears strangers approach. The strangers say their village has been ravaged and they are traveling further into the jungle to find “a new beginning.” Jaguar Paw ponders this strange encounter, but his father reminds him that fear will kill him if he lets it.

Complicating matters is that the raiders plan on sacrificing all the men captives and sell the women into slavery. Only an act of God or Nature can save Jaguar Paw from this terrible fate.

In APOCALYPTO, director Mel Gibson provides moviegoers with another fantastic setting to play out bloody acts of courage and sacrifice. His directing is superb, and the cast, led by Rudy Youngblood as Jaguar Paw, is magnificent. Despite all that, the chase scenes after Jaguar Paw escapes become one long, somewhat predictable montage of bare escapes. This kind of thing was done better by Cornel Wilde in his 1966 masterpiece THE NAKED PREY.

APOCALYPTO also contains extremely strong, bloody violence, including a Mayan priest holding two bloody hearts plucked from people’s bodies before decapitating and rolling their heads down some temple steps. There is also brief foul language, including one “f” word.

Furthermore, Jaguar Paw and his tribe display a vague paganism of ancestor worship, in contrast to the evil idolatry, polytheism and human sacrifice of the cruel villains. At one point, a female native pleads to a female demi-god or ancestor of some kind, which probably symbolizes Mel Gibson’s Roman Catholic veneration of the Virgin Mary. At another point [possible SPOILER], a solar eclipse saves Jungle Paw’s life. One may interpret this natural phenomenon as an act of God, but the movie contains no direct spiritual references leading viewers to believe this. There are also very few, if any, monotheistic or Christian elements to counter the vague paganism and ancestor worship of the movie’s noble, heroic protagonist. The script’s three contrived Deus Ex Machinas seem to take one out of the mood of the movie’s intensely harrowing, action-filled second half.

Like BRAVEHEART and even THE PASSION OF THE CHRIST, APOCALYPTO extols human courage, freedom and family bonds in the face of extreme evil. THE PASSION remains Mel Gibson’s masterpiece, however, for it alone shows how the grace and power of God, through Jesus Christ, overcomes the wicked oppression of sin. The sublime artistry of that movie’s opening reference to the Messianic prophecy of Gen. 3:15 (perhaps the most important prophecy in all of Holy Scripture), its final shot of divine strength and resurrection, its depiction of the Way to the Cross, and its powerful images of the sorrow of Mary, Jesus Christ’s mother, and God the Father at the death of Jesus, remains unmatched in modern cinema.