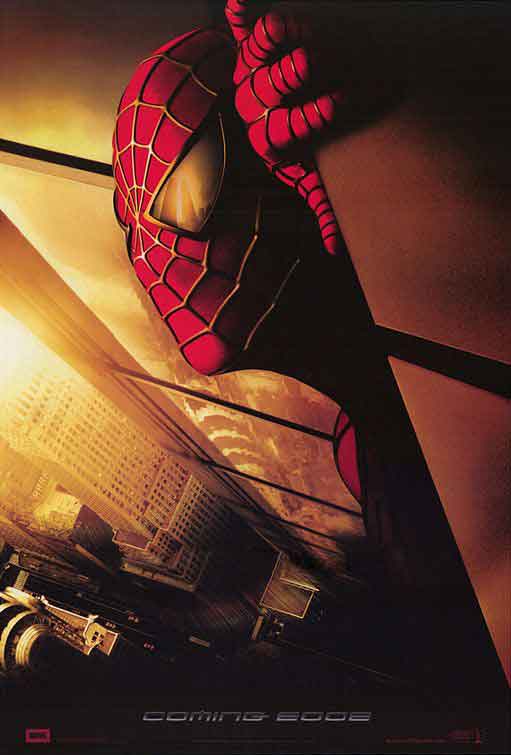 SPIDER-MAN opens with Peter Parker telling the audience that this is a movie about a girl: Peter Parker’s neighbor, Mary Jane. A genetically engineered spider bites Peter, giving him super powers, and a family tragedy convinces him that he has to use his powers to protect the innocent. Peter’s transformation attracts Mary Jane. Meanwhile, the multi-millionaire father of Peter’s romantic rival becomes the Green Goblin, a schizophrenic with superhuman strength. The Green Goblin decides to destroy Peter the Spider-man and everything that Peter loves.

SPIDER-MAN is very high octane, with lots of tense action and lots of exciting adventure, so much so that the premise (remember this story is about a girl) gets lost in the middle of the movie. The plot picks up rather quickly, however, and, better than that, there are many positive moral and redemptive messages, including the Lord’s Prayer, lot's of "God bless you-s" and references to biblical wisdom. Tobey Maguire makes Spider-man come alive. Willem Dafoe has some wonderful conflicted moments in this movie, but sometimes slips into mannerisms. Kirsten Dunst is good as Mary Jane. The action violence is too intense for younger children, however.

(BBB, CC, Ev, LL, VV, S, A, D, M) Strongly moral worldview with overt Christian, redemptive content such as several “Thank God for you, Peter” and the whole Lord’s Prayer recited as a person is attacked by the Green Goblin; minor references to genetic engineering speeding up evolution; 10 light obscenities, 2 “Oh, My Gods,” and four profanities, one serious taking of the Lord’s name in vain; lots of action violence with very little blood, including Peter Parker gets into a fist fight in school, gets bitten by a spider, raises money by entering an amateur wrestling match with all of the wrestling throws and moves, and several serious battles between Peter and the Green Goblin, one where the Goblin cuts Peter’s arm, which bleeds, and another where the Goblin impales himself with his own weapon; two kisses and gang threatens young girl; no nudity but low-cut outfits on female wrestlers and wet T-shirt on the love interest; alcohol use; smoking and drug use as part of an experiment; and, many crimes thwarted by Spider-Man including stealing, breaking and entering and beatings.

The movie SPIDER-MAN is not only well-constructed, exciting and entertaining, but it is chock full of faith, much to our surprise.

Three times during the story, people say very clearly, “Thank God for you, Peter.” Peter Parker’s aunt, with whom he lives, says the Lord’s Prayer just as the villain attacks, so her prayer to “deliver us from evil” seems to be answered by God’s Grace alone! Cliff Robertson, who shows up at a lot of real-life Christian events in Hollywood, says, “Let there be light,” as he screws in a light bulb, to which his wife May replies, “God will be thrilled.” In another scene, May asks the Green Goblin’s alter-ego, Norman Osborn, to say grace. There are many other God bless you’s. Furthermore, Spider-man Peter Parker’s uncle tells him as he dies the theme of the movie, “With great power comes great responsibility,” to which Peter much later adds, “This is my gift and this is my curse.”

Since we know some of the people behind this production, we’re are not surprised by this very Christian God talk in one of their movies. It is surprising, however, to find this God-talk in a movie about a comic book character who in his comic book persona often seemed like a teenager with a wisecracking attitude.

SPIDER-MAN opens with Peter Parker’s narration telling the audience that this is a movie about a girl. The girl is Peter Parker’s neighbor, Mary Jane or MJ, played by Kirsten Dunst. MJ, however, is the most popular girl on campus and dating the really big man on campus. Also, the very wealthy Harry Osborn, son of multi-millionaire inventor Norman Osborn, has his eyes on her. Compounding Peter’s romantic problems is that he’s a four-eyed wimp that everybody likes to make fun of whenever they see him. Even the bus driver won’t stop for him, and, when he gets on, his classmates him. The only thing that doesn’t happen to Peter is that nobody kicks sand in his face.

One day, on a trip to one of the most advanced research labs in the world, where they’re breeding super spiders, one spider bites Peter. He goes home to his aunt and uncle’s house and falls to sleep on the floor in a cold sweat. The next morning when he wakes up, there’s something different about Peter: he doesn’t need his glasses; he’s strong; and, when the bully at school tries to beat him up, he not only avoids all the punches with lightening reflexes, but he lands one punch that that sends the bully all the way down the school hall. Suddenly, MJ notices Peter.

As Peter develops his spider-man skills, Norman Osborn is having trouble with his defense contract. The army general doesn’t like Norman, and Norman’s top scientist says that the miracle drug they have designed for the army, which is supposed to turn soldiers into supermen, is actually producing psychotic, schizophrenic killers. Norman panics. He doesn’t want to lose the contract, so he does what any comic book inventor would do, he takes the drug himself and turns into the psychotic, schizophrenic killer. This, however, is a Jeckyl and Hyde situation because the real Norman doesn’t want to turn into the Green Goblin. Interestingly enough, the movie almost portrays this transformation as demonic possession, especially in the scene where Aunt May says the Lord’s Prayer while she’s being attacked by the Green Goblin.

Back to Peter, who wants to raise some money to buy a car to impress MJ. He signs up to participate in a cage wrestling match. If he can last three minutes, he gets $3,000. When he beats the big gorilla in a short amount of time, he only gets $100. After all, he didn’t last three minutes.

As he leaves the ring to find his uncle, his uncle has been shot by a carjacker. Thus, Peter realizes that he has to right this wrong and protect other innocent victims. Wearing his wrestling Spider-man outfit, he goes off to exact vigilante justice.

SPIDER-MAN is very high octane, with lots of action and lots of adventure. So much so that the premise (remember, Peter told us that this story is about a girl) gets lost in the middle of the movie. Thus, some reviewers say they love the first half, but not the second.

Actually, the plot picks up rather quickly and, better than that, there are many moral and spiritual messages, a few of which were mentioned at the beginning of this review. One that was not mentioned was when the Green Goblin gives Peter a choice of letting the Goblin kill a bunch of schoolkids or kill his love interest, MJ. Although set in a comic book world on top of the 59th Street Bridge of the comic book version of New York City, the Green Goblin dilemma in the movie clearly represents a Solomon-like case requiring biblical wisdom to choose the good. Eventually, even the conflicted Norman/Green Goblin wishes Peter “God Speed.” Furthermore, at the end, Peter has become a humble hero who understands the responsibility of great power.

Kirsten Dunst is good in this movie as MJ, though she doesn’t have as much range as she did in THE CAT’S MEOW. Tobey Maguire makes Spiderman come alive and deserves commendation. Cliff Robertson is heartwarming as Peter’s Uncle Ben. Willem Dafoe has some wonderful conflicted moments in this movie, though his portrayal sometimes slips into mannerisms rather than the fine acting he is known for in his other movies. In a movie with so much God talk, it’s too bad that there are some profanities and obscenities, usually out of the mouth of Willem Dafoe’s conflicted character. The romance is very chaste throughout, although Kirsten Dunst seems to be trying to restrain her normally seductive persona.

The real problem with the movie is, of course, the action violence, which includes the frightening villain. Some of the beatings are pretty intense, and the Green Goblin makes the audience believe that he really does want to kill his victims.

Even so, it is extremely rare that an action fantasy like this has so much faithful, moral content. With great power comes great responsibility, and the filmmakers and Sony Studio are to be commended exercising some of this responsibility in the production of the terrific, entertaining SPIDER-MAN.