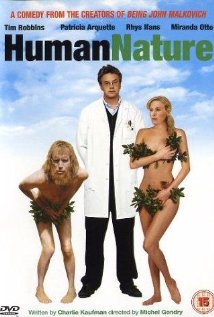 HUMAN NATURE opens with an apparent murder. In flashback, viewers learn what led up to this violent event. First, they learn about Lila, who has been afflicted with copious amounts of body hair since puberty. After a brief sojourn communing with nature, the bitter Lila returns to civilization to find a mate. She settles for Nathan, a stuffy behaviorist obsessed with etiquette. They find a young man raised as an ape by his deranged father. Nathan decides to teach him how to be civilized, despite Lila’s misgivings. Complicating matters is Nathan’s demure French assistant, Gabrielle, who clearly is trying to seduce Nathan. All sorts of comical, sometimes lewd, situations ensue.

The humanist premise to HUMAN NATURE is that sex produces human relationships. It can also destroy human relationships, however, as shown by the changes that take place in this story. The worldview elements, language, sexuality, and nudity are extreme in HUMAN NATURE, but the story is done in a light, comical tone that manages to provoke much thought. It also pokes fun at pagan nature lovers and behavioral science. Thus, the movie doesn’t seem to merit a totally abhorrent rating, but it is extreme

A humanist worldview, especially when coupled with strong pro-evolution elements, says that human beings are just highly evolved meat machines. That pretty much sums up the worldview of HUMAN NATURE, a wry satire from Charlie Kaufman, the writer who brought us another quirky comedy two years ago, BEING JOHN MALKOVICH.

HUMAN NATURE opens with an apparent murder and the suspected assailant caught. In flashback, viewers learn what led up to this violent event.

The first person they learn about is Lila, a woman who has been afflicted with copious amounts of body hair since puberty. Bitter toward humanity, Lila decides to join the animals in the woods, where she becomes a popular nature writer. Lila goes back to civilization to search for a mate.

Lila’s electrologist introduces her to Nathan, a behavioral scientist and product of relentless etiquette training from his uptight mother. Nathan believes manners and civilized behavior are the gateways to peace and harmony. His latest project involves teaching table manners to two white mice. Soon he and Lila are living together, but Lila continues to shave in secret, and Nathan says nothing about the demure romantic overtures from his French assistant, Gabrielle.

While hiking in the forest one day, Lila and Nathan come upon a feral young man raised as an ape by his deranged father. Despite Lila’s misgivings, Nathan captures the young man and puts him into a plastic cell, where Gabrielle names him Puff after her dog. Everything seems to be going fine, except for Puff, until Nathan finds out about Lila’s body hair and has an affair with Gabrielle. Further twists and turns lead to comical, and tragic, results.

The humanist premise to HUMAN NATURE is that sex produces human relationships. It can also destroy human relationships, however, as shown by the changes that take place in the movie’s story. In the end, it is his sexual desire that makes Puff want to become part of human civilization. Thus, he eventually rejects Lila’s viewpoint supporting nature for Nathan’s viewpoint in favor of human culture. This is done in a comical, humanist vein, however.

The worldview elements, language, sexuality, and nudity are extreme in HUMAN NATURE. It is hard to get angry with a movie, however, that shows a couple of white lab mice holding up a hitchhiking sign saying, “New York.” HUMAN NATURE also pokes fun at pagan nature lovers and behavioral science. Therefore, although MOVIEGUIDE® does not recommend this little satirical gem, the movie doesn’t seem to merit an abhorrent rating.