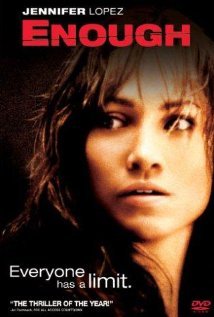 ENOUGH is a forgettable domestic thriller with a scared, sweaty Jennifer Lopez as a woman who's abused by her philandering husband. Lopez plays Slim, a waitress who marries a rich lawyer named Mitch. Several years later, Slim finds out that Mitch is cheating on her, but he refuses to divorce her and turns physically abusive. Slim escapes with their daughter, Gracie, and goes into hiding. Mitch eventually tracks her down, however, so Slim decides to take martial arts and lay a trap for her husband, leading to a violent showdown.

The ending of ENOUGH plays a bit like some kind of wrestling program. Titles like “Marital Smackdown” come to mind. Some viewers might not be able to resist the movie's story of a damsel in distress, however. Morally, the movie strongly condemns adultery and domestic abuse, but Slim's ultimate solution seems to be somewhat humanistic. This goes along with the movie's feminist angle of a woman taking martial arts training to stop her abusive husband. In fact, except for Slim's martial arts instructor, the men in this movie are either pathological monsters or weak. MOVIEGUIDE® advises caution for older children

(H, Fe, B, LL, VV, S, A, D, M) Humanist revenge thriller with feminist and moral elements, including adultery rebuked and mother defends child; seven obscenities, one GD and five mild profanities; strong violence with husband slapping, punching and threatening wife, who eventually has to fight back by taking martial arts and laying trap for evil husband, resulting in final bloody battle of fisticuffs, crashing into objects and death, plus car chase scene and henchman threatens child; implied adultery and promiscuity; no nudity but mildly revealing clothes and woman trains in gym; alcohol use; smoking; and, nothing else really objectionable.

ENOUGH is a forgettable domestic thriller with a scared, sweaty Jennifer Lopez as a woman who’s abused by her philandering husband. Some poor writing and lackadaisical direction might drive some viewers to tell the projectionist, “Enough! I don’t care to see any more of this.” Others, however, might find the movie more worthwhile on an emotional level.

Lopez plays Slim, a young waitress who finds romance with a rich lawyer named Mitch, played by Billy Campbell of THE ROCKETEER. She meets Mitch when he protects her from an apparently lecherous young man, Robbie, played by Noah Wyle of the TV show ER. Mitch and Slim get married and have a child, a daughter named Gracie.

About three years later, their marriage seemingly foundering, Slim discovers that Mitch is cheating on her. She confronts Mitch, who tells her that’s too bad – he’ll go to bed with anyone he chooses. And, by the way, he doesn’t want a divorce, because he still wants her as well. Apparently, Mitch sees Slim as part of his harem, which includes being a babysitter for Gracie.

When Slim tries to escape from this slime bucket, things turn violent. Mitch punches Slim and threatens her friends, who come to help her escape. Eventually, Slim manages to escape with Gracie. The police prove to be no help, so Slim tries to get help from her estranged father in San Francisco, but he’s not interested in her problems. She then takes Gracie to hide out with her old boyfriend in Seattle, Joe. Mitch, however, sends some goons posing as FBI agents to Joe’s apartment. Slim and Gracie barely escape.

Slim tries to run, hiding out in Michigan. Her father finally gives her money when the goons from Joe’s place start threatening him as well. Eventually, however, Mitch discovers where they are, so Slim decides to take matters into her own hands. She takes martial arts and lays a trap for Mitch at his new place, in a physical showdown of epic proportions.

ENOUGH does pack some emotional punch. After all, who can resist rooting for a mother who’s trying to protect herself and her child from an abusive husband? The ending plays a bit some kind of wrestling program. Titles like “Marital Smackdown” or “Suburban Cage Fight” come to mind. The writer and director undercut their efforts by inserting stupid, superfluous titles between the movie’s different sections, such as “How They Met.” There are also things in the plot that are weak. For instance, the back stories for Mitch and Slim are not convincing or well-developed. If Mitch wants to become a playboy, for example, why can’t he just divorce Slim? Especially since the relationship between Mitch and his little daughter, Gracie, doesn’t seem particularly warm. Thus, there’s no reason for his attitude, and the movie provides no solid explanation for what has made Mitch such a monster.

Morally, although the movie strongly condemns adultery and domestic abuse, Slim’s ultimate solution seems to be somewhat humanistic. This humanist worldview goes along with the movie’s feminist angle of a woman taking martial arts training to stop her abusive husband. Thus, all of the men in this movie, except for her martial arts instructor, are either pathological monsters or weak. The movie’s humanism and feminism are not particularly overt or overbearing, however. Furthermore, there are no depicted sex scenes in the movie, and the foul language is kept lighter than usual. Still, older children probably will be disturbed by some of the adult elements in the movie, especially the domestic violence.