THE SUM OF ALL FEARS

"A Vision of Nuclear Holocaust" 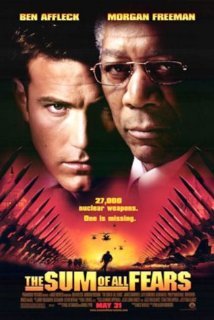 THE SUM OF ALL FEARS, based on the bestselling novel by Tom Clancy, portrays a looming nuclear war and speaks to the fears of many in today's uncertain climate of terrorism. Ben Affleck stars this time as a much younger Jack Ryan, a Russian analyst at the CIA. After a fact-finding mission to an abandoned army base in the Ukraine goes awry, Ryan learns that a nuclear device has gone missing. Ryan learns that neo-Nazi terrorists plan to detonate the bomb at the Super Bowl, then blame the attack on Russia in the hopes of rekindling the Cold War. Cabot won’t answer his phone, and Ryan can’t get there fast enough.

With heart-pounding action throughout, THE SUM OF ALL FEARS will thrill even the most stoic of hawks. The acting, including performances by James Cromwell, as President Fowler; Alan Bates, as the ruthless British industrialist; and, Liev Schreiber, as CIA Operative John Clark, the super spy assigned to take Ryan into the field, is outstanding. The pacing is also perfect. Extreme violence, a humanist worldview, and some obvious sexual situations with nudity, however, make this suspenseful movie inappropriate for teenagers and young children

(H, B, C, PP, LL, VVV, SS, A, D, M) Humanist worldview with moral elements in plot about doomsday scenario of nuclear war brought on by Communists and the portrayal of the hero-man as the only source of hope, including biblical portrayal of a fiery “end of the world” catastrophe brought on by war between two superpowers; patriotic hope of salvation by American government hero; about 20 obscenities, 12 strong profanities and five mild profanities; extreme violence including repetitive shooting and fighting, nuclear holocaust and graphic depiction of injuries from same; obvious sexual situations between main character and girlfriend including implied fornication, attempted fornication interrupted and depicted heavy kissing in bed; no nudity, but some cleavage; limited alcohol use; smoking; and, miscellaneous issues such as deception, theft and lying, usually by neo-Nazi terrorists who are rebuked.

Thanks to the Cold War between the United States and the Soviet Union, beginning in the mid-50s and ending in 1989 with the fall of the Berlin Wall, several generations of Americans lived under the fear of nuclear war. Films like THE DAY AFTER, a made-for-television movie that played on the politics of the nuclear arms race and vividly portrayed a nuclear holocaust, especially haunted the dreams of children born during the 60s and 70s, who often cited “nuclear war” as one of their greatest fears.

The facts are not reassuring. According to the CIA, at least 20 countries, nearly half of them in the Middle East and South Asia, already have or may be developing weapons of mass destruction. Moreover, public records reveal that of the tens of thousands of nuclear weapons constructed during the Cold War, 164 transportable warheads are still unaccounted for by the authorities. What if they fell into the wrong hands? THE SUM OF ALL FEARS asks just that question.

Based on the 1991 New York Times bestselling novel by author extraordinaire Tom Clancy, THE SUM OF ALL FEARS portrays a looming nuclear war and speaks to the fears of many in today’s uncertain climate of terrorism. Producer Mace Neufeld (who also produced THE HUNT FOR RED OCTOBER, PATRIOT GAMES and CLEAR AND PRESENT DANGER) has provided yet another film that is bound to thrill. Furthermore, Jack Ryan is back, only younger and fitter. Played by Ben Affleck, who inherited the role from Harrison Ford, our hero is once again poised to save the planet, only years before he works his way up through the CIA to become President of the United States.

CIA Director William Cabot, played superbly by Morgan Freeman, enlists the help of young Jack Ryan, an analyst at the Russian Desk and an expert on Russian President Alexander Nemerov, who has just ascended to the presidency after the sudden death of his predecessor. The Americans don’t know whether Nemerov is a hawk or a dove, but suspect he’s trouble. Ryan insists otherwise, much to Cabot’s annoyance. However, when Ryan’s Russian language skills forge a connection with the Russian President during a peace trip to the Kremlin, Cabot moves aside to allow Ryan access to the top-secret mission.

After a fact-finding mission to an abandoned army base in the Ukraine goes awry, Ryan learns that a nuclear device has gone missing. With some sleuthing, he also discovers that European neo-Nazi terrorists recently purchased it from a band of Arab Bedouins and smuggled it into the United States. While the President and Cabot enjoy a football game in the Baltimore Forum, Ryan learns that the terrorists plan to detonate the bomb at the Super Bowl, then blame the attack on Russia in the hopes of rekindling the Cold War. But Cabot won’t answer his phone, and Ryan can’t get there fast enough.

With heart-pounding action throughout, THE SUM OF ALL FEARS will thrill even the most stoic of hawks. The acting, including performances by James Cromwell, as President Fowler; Alan Bates, as the wealthy and ruthless British industrialist; and, Liev Schreiber, as CIA Operative John Clark, the agent and super spy assigned to take Ryan into the field, is outstanding. The pacing is perfect, with non-stop thrills that continue to mount as Ryan uncovers the mystery of the missing weapon. Even after the climactic explosion, and its aftermath, director Phil Alden Robinson manages to maintain the suspense.

The violence of the movie is graphic, and the repercussions are traumatic. Because it portrays events that could realistically occur, especially with current threats of terrorist attacks, THE SUM OF ALL FEARS should not be viewed by young audiences. Obvious sexual situations between Ryan and his girlfriend add to the dilemma for many parents of whether this film should be seen by even older teens. All audiences, however, will benefit from a frank discussion about THE SUM OF ALL FEARS’ apocalyptic ending, its biblical portrayal of the end times as described in the book of Revelation, and what it means to put our faith in a living God, so that we need not fear death, even in the midst of such a terrifying catastrophe.

Fortunately, there is a savior, and his name is not Jack Ryan, but Jesus Christ. Omniscient and omnipresent, He knows our every need and has conquered death, no matter what its origin, on the Cross. If we place our hope in Him, even though we may perish, we will not be forsaken.

Watch THE SUM OF ALL FEARS: