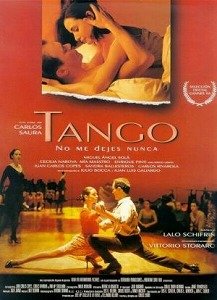 Tango fans around the world may be pleased with the fantastic dance numbers and wonderful score of the movie TANGO from Sony Pictures Classics, but they will find the story and characters a little boring. Also, too many extraneous themes and images, including mild homosexual motifs in two numbers, dilute the drama.

Tango fans around the world should be very pleased with this new film from Sony Pictures Classics. Several internationally renowned filmmakers have combined their talents to create a visually stunning and musically complex dance movie. The high quality of the music, dancing cinematography are undercut, however, by a slightly boring story with boring characters and by a wealth of extraneous themes and images that finally overwhelm the drama.

Writer and director Carlos Saura (BLOOD WEDDING and CARMEN) creates a film within a film, where fantasy and reality merge. His story centers on Mario Suarez, a middle-aged, well-respected movie director in Buenos Aires who begins work on the ultimate movie about the tango, Argentina’s most popular dance. Emotions, thoughts and images from his own life (his successful career, his mid-life crisis, his recollections of the harsh repression by Argentina’s former military dictators, his ex-wife, and his new lover) converge in Mario’s movie, which is filled with stirring tango numbers. All the dance numbers are staged on a huge movie soundstage. The audience sees some rehearsals for the dances, some imaginary tango numbers that Mario is still sorting out in his mind and what appears to be the actual filming of some of the dance numbers.

Interspersed among these dances is a relationship that Mario begins with one of his dancers, a young woman named Elena. Mario, who is divorced from another dancer in his troupe, asks Elena to live with him, even though it enrages her middle-aged ex-lover Angelo, who happens to be both a mobster and a financier of Mario’s movie. At one point, Angelo threatens to kill Elena if she leaves him. This love triangle comes to a head during a final tango number when a menacing character appears.

Like the Oscar-winning film version of the musical CABARET, Saura uses his musical dance numbers to reveal the passions and events his main characters undergo. He even uses some dark, funhouse mirror images in a few scenes, as CABARET did. The characters here, however, just aren’t as memorable as they should be. Also, the story behind their love triangle lacks a well-paced, entertaining structure.

In addition, too many extraneous themes and images overshadow the wonderful qualities of the dance numbers, as well as dilute the film’s basic drama. Some of these themes and images have mild political overtones during an extended dance number about the murder and torture which Argentina’s military dictators engaged in about 20 years ago or so. Two scenes also have mild homosexual motifs. For instance, Mario imagines Elena and his ex-wife dancing a mildly erotic tango. He also stages a frantic dance between the men in his troupe that ends with two of the men in a tango embrace and kiss. This particular dance looks like a staged homosexual version of the dances between the Sharks and the Jets in WEST SIDE STORY.

Finally, TANGO fails to condemn the implied fornication that the unmarried couples commit in the movie. The romance of romance, the romance of tango and the romance of filmmaking seem to be its only values, values that reflect a romantic worldview where sensual pleasures and personal happiness are the main goal in life.

In the end, TANGO is more about how people use the movie camera to fire their imaginations and to mix fantasy and reality. These two overused themes need a livelier, more entertaining and more moral imagination than Saura displays here.