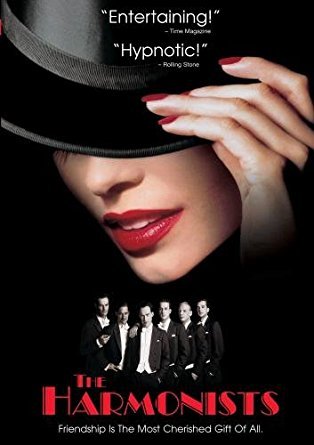 THE HARMONISTS is a macho SOUND OF MUSIC, the true tale of three Jewish-Gentile singers within a famous quintet, who face the horrors of Adolph Hitler's National Socialists in Germany. Though the group must face tragedy, the singers live hedonistic lifestyles including pre-marital sex and even cocaine use, which dampens the moral message of friendship and music.

THE HARMONISTS is a macho SOUND OF MUSIC, the true tale of three Jewish singers in a quintet, who face the horrors of Adolph Hitler’s National Socialists in Germany. Founded in 1927 in Berlin, the Comedian Harmonists quickly became very popular throughout Europe. Their bright, original songs included such suggestive and slightly titles as “Mein Kleiner Gruner Katus”, which loosely translated means “My Asparagus is Sprouting.” They sang joyously on all matters of life and love before huge audiences and crowds before they were forced to break up in the late 1930s.

In 1927, a Jewish-German soloist Harry Frommermann (Ulrich Noethen) decides he wants to put together a singing group modeled after the American a cappella group “The Revelers.” Through auditions and various sources he recruits fellow Jews Ari (Max Tidof) and Roman (Heino Ferch), as well as two Gentiles, Robert (Ben Becker) and Erich (Heinrich Schafmeister). After months of rehearsals, they audition and are thrown out by a talent agent. The agent says the music sounds like funeral music.

Forlorn, they grab a drink at a local saloon and begin singing again, a complex series of notes based on a Duke Ellington tune. This time, the group sounds livelier. They decide they still have a shot at stardom so they practice for one more month and are hired to sing nightly throughout Berlin. Meanwhile, Harry woos a Gentile shopgirl named Erna (Meret Becker) working in a Jewish-owned store. The two fall in love and fornicate while the other fellows find romantic comfort in the arms of prostitutes (no instances of intercourse or actual nude lovemaking are depicted on the screen). Soon, as the National Socialists come to power, the group is asked to perform in front of members of the Third Reich. Also, Robert himself woos Erna, who is upset about Harry’s failure to commit to her. She and Robert have a secret affair.

Eventually, the group is invited to sing in America and are received with great enthusiasm. Harry questions if he should return to Germany, knowing that his very life as a Jew is at stake. He does return, however, and the group performs one last time together before they are forced to disband.

This movie features accurate costuming, art direction and the original recordings of this legendary singing group, with the German actors lip-synching their musical numbers. Honorable aspects of the movie include hard work, camaraderie, Jewish prayers, a Jewish wedding, and friendship. Regrettably, some of the members of the group enjoy wine (and sometimes cocaine) and women (including visits to a house of ill repute) as well as song. Thus, they are likable fellows but immoral. While one can empathize with them and understand their anguish when they are denied the right to perform, it is hard to root for their success if it involves cheating on one another’s girlfriends and satisfying the lusts of the flesh.

Yet, the music remains the true star of the show, and it perseveres. With LIFE IS BEAUTIFUL, SAVING PRIVATE RYAN, THE THIN RED LINE, and other World War II material being popular again right now, the American release of THE HARMONISTS couldn’t be better timed. However, Because the movie fails to reveal the true menace of the National Socialists, yet displays the rather hedonistic lifestyle of the group, it fails to champion true heroes in the face of danger.