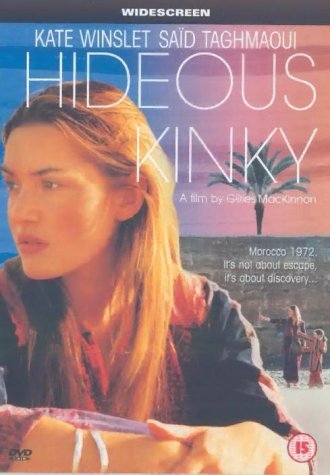 HIDEOUS KINKY is the story of an English woman, named Julia played by Kate Winslet, who seeks "truth" in the exotic culture of Marrakech, Morocco in 1972. Julia's troubles include supporting two younger daughters, with scant support from her former lover, their father, and no ethical framework to guide her search. Including illicit sex, some false religious elements and anti-Christian worldview, this search for truth concludes that there is no truth out there, but isn't Morocco pretty.

HIDEOUS KINKY is the story of an English woman, Julia (Kate Winslet), who seeks “truth” in the exotic culture of Marrakech, Morocco in 1972. Julia’s troubles including supporting two younger daughters, with scant support from her former lover, their father, and no ethical or theological framework to guide her search.

For Lucy and Bea (Carrie Mullan and Bella Riza), who are 6 and 8, respectively, Morocco is colorful and exciting but unstable and frightening as well. The story opens on Christmas Day. Julia joyously opens a gift parcel from the girls’ father, but they realize the presents were intended for another lover’s child of his, not them.

While Julia tries to get by on selling dolls and fending off prostitutes who pillage her laundry, she runs into Bilal, a street performer who immediately becomes her lover. The children embrace him, hoping to gain a stable father figure. Bea insists on stability and states stubbornly that all she wants is “a normal life.” She insists she must learn and attend school, somehow innately knowing that she needs some kind of foundation in her young life.

Julia talks about the need to “annihilate the ego” and “find the good within,” something that a sect of Islam preaches. Yet, Julia has no problem with feeding her own needs and desires at the expense of her children. She plays with tarot cards and attends Islamic ceremonies, where she dances and faints, later telling her children, “It’s okay. My mum embarrassed me too.”

Bilal takes them to his mountain village, where a standoff with a young village woman results in Bilal insisting that they must leave. This, coupled with a cagey evasion at a police checkpoint, does not escape Bea’s observing mind. She surmises far before her mother that Bilal is probably both married and an outlaw.

While they feed on the cast-offs of a hotel resort, and skinny dip in a lake to bathe, Julia is undeterred from her spiritual search. When they return without Bilal to Marrakech, Julia still has plans to travel to see a “Sufi.” Even though the world around her is dirty, full of stench and poverty, Julia still seems to believe that this exotic culture which denigrates women and reinforces stealing has more to offer than her own Christian heritage.

Bea, however, has the wisdom in this family. She insists on staying behind at a villa with a kind stranger while Julia and Lucy travel to the “Sufi.” Precariously hitching a ride with a delirious German, Julia and Lucy travel with an old Moroccan man in a beat-up pick-up until he almost runs into a camel. They continue on foot, arriving at the “Sufi’s sanctuary” just in time for his funeral. Julia is granted an audience with his successor, who clearly has no more a corner on truth or wisdom than the camel they almost ran over.

So, Julia makes it back to Morocco in the hopes of celebrating Bea’s birthday, only to discover Bea and the kind stranger are no longer at that villa. Distraught, Julia’s searches high and low only to find Bea in a polio orphanage under the strict hand of a Christian woman named Patricia. Patricia is, of course, cold, uncaring and manipulative. She scolds Julia, who cries and somehow woos Bea back to the prostitute hotel they stayed in initially. It is only when Bea becomes ill to the point of death that Julia finally decides it might be time to end the adventure and return to England.

HIDEOUS KINKY celebrates the wanderlust of youth and the excitement that discovering different cultures other than your own can bring, but the movie doesn’t reveal the selfishness of doing this with sexual abandon, and the foolishness of taking two small children with you without a stable means of support.

The movie also doesn’t courageously explore the whole concept of the spiritual search. Julia honestly searches, but she doesn’t find anything. In the end, Julia doesn’t have much to say about her failed journey. The movie seems to say, “see, there is no truth out there, silly. It’s all inside you, but gee, isn’t Morocco neat?” The audience is left with images of an exotic culture and the children who were both bewildered and charmed by it. The script was adapted by a book by Esther Freud based on her childhood experiences, which may explain why it focuses on the trees rather than the forest.

Writer: Billy MacKinnon BASED ON THE NOVEL BY: Esther Freud