THIS IS MY FATHER 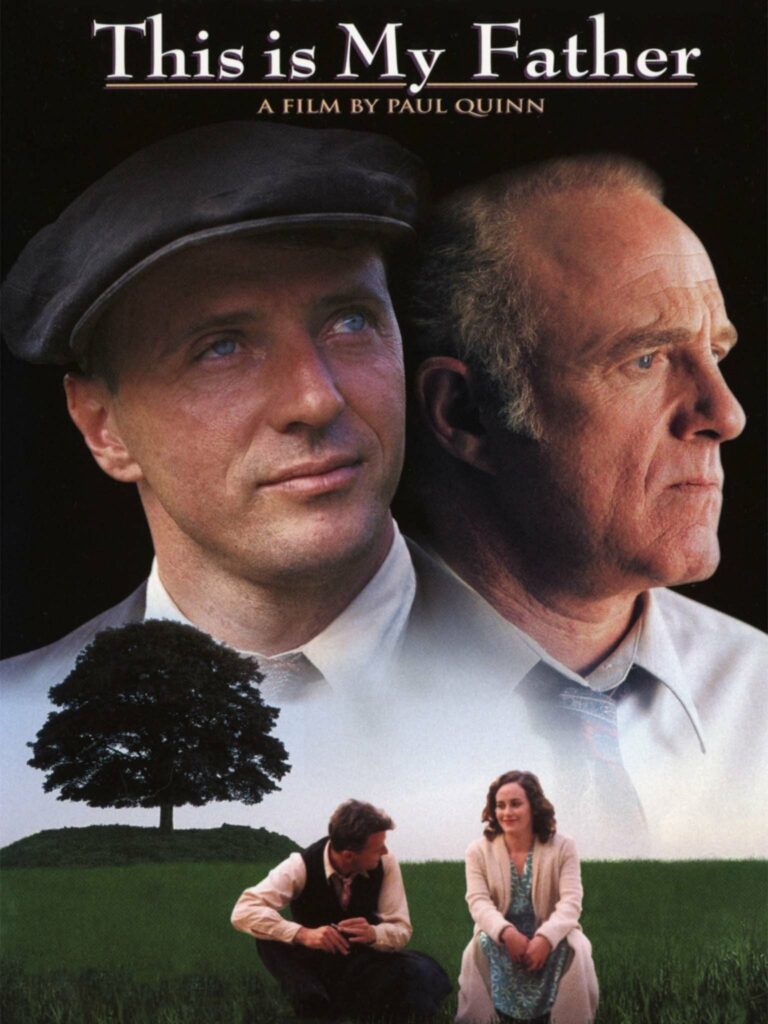 In THIS IS MY FATHER, a burned-out, cynical high school teacher journeys to his ancestral Ireland to find the truth about his father. Although it contains high production values, and good cinematography, this gloomy tragedy leaves moviegoers with a distinct melancholy aftertaste, and no sense of hope or redemption.

A film collaboration by three brothers, THIS IS MY FATHER bills itself as a family film about a man finding his lost father.

A credible and promising subject matter, first time director Paul Quinn does a yeoman’s job of visual storytelling, knitting the threads of his film into a cohesive and moderately entertaining yarn. Brother Declan Quinn finds plenty of rainy landscapes to photograph, and does a good job of cinematography. Finally, actor Aidan Quinn (AT PLAY IN THE FIELDS OF THE LORD) competently portrays the guilt ridden Irishman who sired the movie’s protagonist.

THIS IS MY FATHER falters, however, and finally gets irretrievably stuck in the mud of excessive morbidity, losing its audience’s ability to sympathize with its unremitting emotional gloom.

Cynical and disillusioned Chicago high school history teacher, Kieran Johnson (James Caan), discovers a photo of his mother as a young girl, who is locked arm in arm with a farmer. He also finds a fragmentary love poem from her to him. Faced with daily mockery from his smart-aleck students, who trade insults with him over his dim view of their future and their disdain for his lapses in concentration as he daydreams during class, he tells his divorced sister with whom he lives that he is leaving for Ireland on a genealogical voyage to discover his family roots. He agrees to take his misbehaving nephew, Jake.

Arriving at a bed and breakfast in the old country, Kieran and Jake find an old gypsy woman who knows the story of Kieran’s father. In flashback, the old woman chronicles his story.

It is 1939, and the rebellious, beautiful and saucy teenaged Fiona Flynn (Moya Farrelly), daughter of a rich, but embittered widow named Gina, returns home from Catholic boarding school, from which she has just been expelled. Meanwhile, the simple, but workmanlike Irish farmer, Kieran O’Day (Aidan Quinn) cuts and hauls peat (a unique kind of burnable solid found in Ireland and Scotland). He works for the widow’s tenant farmers. Head often bowed, the religiously credulous, handsome Irishman suffers acute shame from the social stigma of being an illegitimate child from an orphanage.

One day, Fiona accosts Kieran and asks him to take her to a dance. He agrees, but does not risk ridicule by dancing with her. So the other men take their turns with his date on the dance floor. Two brothers spike the lemonade, and Kieran drinks deeply. Drunk, he hits them when they insult him. The outraged dance hall manager throws Kieran and Fiona out. The next day, the priest who sponsored the event reproves the entire congregation from the pulpit for the previous night’s brawl. He orders everyone to confession.

Meanwhile, Fiona lightens the drudgery of Kieran’s daily farm chores by leaving him love notes by the “gift tree” in the lime kilns. He reciprocates with flowers he cuts from the fields. He and she pledge their undying affection for one another. She tells him she must hear from him every hour. Their breathless mutual love lends an initial charm to the story, which has potential as a charming, quaint Irish love story, even if their love is doomed and tragedy ensues.

Regrettably, the direction that this story subsequently takes robs it of all its latent charm. After a religiously zealous and harsh commandment by a priest to show penance and a rebellious act of fornication, the film ends in a lugubrious climax, which utterly obliterates the potential charm this film might have had.

While the acting is commendable, and the cinematography good, its attitude toward Catholic priests is deplorable. They are depicted as monsters of condemnation, almost modern-day inquisitors in their accusatory, religious zeal. Were there no Catholic priests in pre-World War II Ireland capable of giving loving advice to underage couples? Why didn’t the priests invoke Christ’s grace to reverse the curses which some of the women characters pronounced on others?

Although it starts out with great expectations for high potential charm, THIS IS MY FATHER quickly loses its appeal because of its excessive moroseness and unremitting emotional gloom. What might have been a charming and endearing love story gets mired in the mud of excessive, relentless and almost unbelievable morbidity.