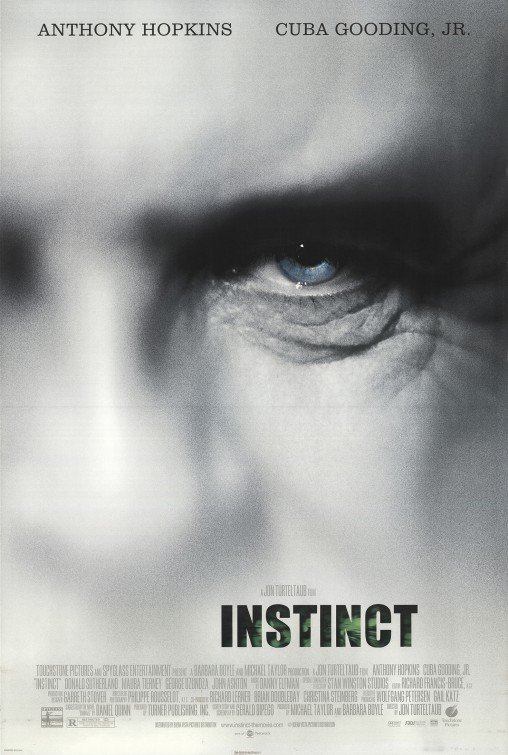 INSTINCT is another Hollywood propaganda film which proposes that animals are more noble than men. INSTINCT tells the story of a professor named Ethan Powell (played by Anthony Hopkins), who disappeared into darkest Africa to study the gorillas. Years later, he is found when he beats two Black park rangers to death to protest their attack on his gorilla family — he has regressed into a gorilla-like state. Now, psychiatrist Theo Caluder must analyze him. Though violent, its real damage is attacking God-given responsibilities to have dominion over the earth.

Strong romantic worldview about a scientist who finds peace among the gorillas in Africa, resulting in pro-evolutionary, pro-animal, humanist propaganda with some anti-poaching statements; 9 obscenities & 7 profanities; extensive violence including lots of beatings with fits clubs, chains, & other objects, shootings, head bashed against a wall, cruelty, anger, explosive violence; no nudity; no sex; alcohol use; smoking; and, drug administered to psychopathic men rebuked.

INSTINCT like CONTACT or KUNDUN is another one of those Hollywood propaganda films. This time, the issue is pure Jean Jacques Rousseau romantic philosophy. Rebelling against his Calvinist parents, Rousseau proposed that man is noble but corrupted by civilization, by which he meant religion.

INSTINCT tells the story of a professor named Ethan Powell (Anthony Hopkins), who disappeared for several years into the mountains of Africa to study the gorillas. Years later, he is found when he beats two Black African park rangers to death to protest their attack on his gorilla family. Clearly, he has regressed into a primal, gorilla-like state. Extradited, he is being brought back to Miami by the State Department for evaluation.

Cuba Gooding, Jr. plays Theo Caulder, a successful psychiatrist who is given the job of evaluating Dr. Powell’s strange regressive personality. Powell has been silent ever since was found. Remaining violent, he beats up several guards at the airport. However, at a prison in Florida, Theo reaches Powell and gets him to start talking about Africa. Powell tells Theo how he eventually got close enough to the gorillas that he was accepted into one gorilla family. There among the gorillas, he found peace.

As Powell talks, Theo starts to become Powell’s student. Powell convinces Theo that civilized man is a taker, and the problem with the world is modern civilization. Ultimately, he shows Theo that there is no enemy but man.

The question is, how noble is a savage who is so anti-social? How noble is the man who wants only to kill people, who beats people to a pulp, who abandons his wife and daughter, and who rejects his heritage and education for life among the gorillas? Are gorillas really the nice family that he makes them out to be? Or, is he just blindly solipsistic as well as psychotic?

This is heavy-handed pro-evolutionary propaganda. Director Jon Turtletaub, who made the moral and friendly WHILE YOU WERE SLEEPING, started displaying his philosophical confusion with PHENOMENON. He goes over the top presdenting the message that man needs to be killed to protect the gorilla’s way of life.

INSTINCT is beautiful, the acting is believable and the story has those emotional moments that could make it a hit. In fact, like PHENONENON, it uses emotionalism to champion its cause.

The script wisely doesn’t directly attack Christianity, though the message of the movie is ultimately anti-Christian. The movie reveals its anti-Christian stance, however, when Powell states that man would be better to give up his stewardship over the earth, a commandment given to man by God. A sex scene and the shrill evangelical Jesus-freak villain hobbled CONTACT, but INSTINCT has none of these drawbacks. It could therefore, succeed at the box office, and instruct the undiscerning to adopt an ungodly, anti-Christian worldview. Most people do not like such blatant propaganda, however, and Americans may be savvy enough to reject this tired, humanist message.