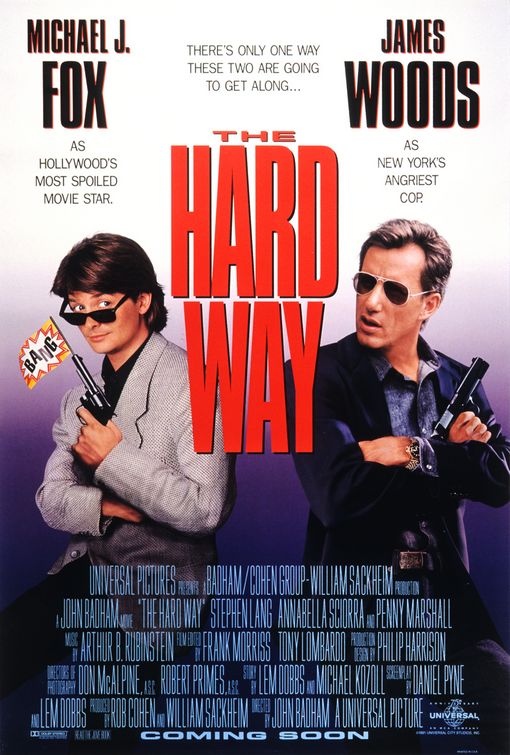 A lightweight movie star, determined to change his image by landing the role of a tough New York homicide detective, tags along with a hard-bitten cop to research the part.

(LLL, VVV, S, PN, A/D) 120 obscenities and 28 profanities; murder, with graphic and extreme violence (including much destruction of cars and property); sexual lewdness, innuendo and slur against marriage; rear male nudity; and, excessive use of alcohol.

Last spring in Manhattan’s Time Square, a billboard was raised for a new film, SMOKING GUN 2, featuring Michael J. Fox holding a gun spewing real smoke. The movie, however, was bogus, part of the set for Fox’s real new movie, THE HARD WAY, which is nothing but nonstop gratuitous violence, with one mindless car chase after another amid much destruction of property and automobiles.

The senses-numbing comedy stars Fox as Nick Lang, a lightweight movie star who wants to change his screen image and land the role of a tough New York City homicide detective for his new film. To research the part, he arranges to tag along with Lt. John Moss, a real NYPD homicide detective, who is consumed with the job of nailing the Party Crasher, a particularly slippery and elusive serial killer. The hard-bitten, tough city cop is vehemently opposed to the idea, but has little say in the matter when the captain takes him off the case and assigns Lang as his new partner.

Moss shows Lang the ropes, including the one he’d like to tie around Lang’s neck, since the actor persists in eating like him, sitting like him and so forth. Furthermore, Moss doesn’t want Lang inside his skin because “a policeman’s job is for real, with just one take to get it right.”

Moss continues to work on the Party Crasher case anyway. With Lang around, things go haywire, and Lang learns about police work “the hard way,” as in getting thrown through a barroom window. Since he is unable to just wait in the car, Moss handcuffs Lang to his sofa-bed. Lang escapes, ending up on a subway train being terrorized by a gang of thugs, where he tries to be a cop for real.

Moss, of course, must save the day. Pressed to the limits by this obnoxious shorter-in-real-life wannabe, he inculcates Lang in a phony murder which sends the actor running. Lang, however, finds out about the deception just as Moss is about to collar the Party Crasher. In back-to-back cliff-hanging scenarios, the life-and-death struggle with the Party Crasher reaches its conclusion atop the giant billboard in Times Square.

THE HARD WAY is intended as all camp. In the first place, Nick Lang is a send-up parody of Indiana Jones. Secondly, in one of the action sequences that is staged in a movie house showing a Nick Lang movie, the action parallels that which the folks are watching on the screen. Only once is an attempt made to distinguish movie making from real life, when the villain shoots Lang and says, “This isn’t a movie, stupid.”

It’s not much of anything else either. Cars crash through more fruit & vegetable stands than you can throw a squash at, the foul-mouthed Moss exhibits such rage and uncontrollable temper that it makes one sick, while girlfriend Susan candidly reveals a flagrant promiscuous wish for the detective to sleep with her (but he’s too busy, you see, making slams against marriage).

Other one-liners are just as offensive, and none of them offer up a single laugh. A lot of money obviously went into the chase sequences, some of them are good, but who cares when the action is punctuated by close to 150 instances of obscenity and profanity. THE HARD WAY is one film no one will want to see.