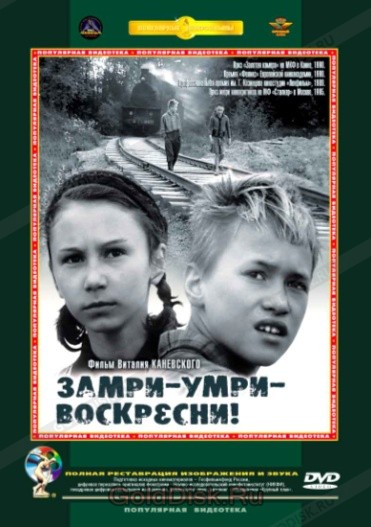 Set in the Soviet Far East just after World War II, the action in FREEZE-DIE-COME TO LIFE unfolds in a small mining community where the border between the local gulag and the village proper seems impossible to detect. Two children, Valerka and Galiya, learn to survive and to turn unlikely situations into their own kinds of games

The title of this film, FREEZE-DIE-COME TO LIFE, refers to a game played by the children, Valerka and Galiya, who turn the most unlikely situations into games.

Set in the Soviet Far East just after World War II, the film action unfolds in a small mining community where the villagers commingle with the slave laborers from an adjacent work camp, or “gulag”, for dissidents. As the film opens, thirteen-year old Valerka watches as his mother, a pale, worn-out blonde, trudges off to work as a prostitute. Street-wise Valerka is left to his own devices which include cutting into his slightly older friend Galiya’s tea profits.

Initially, Valerka gets Galiya to teach him to sell tea to the miners. However, almost immediately he turns on her, telling customers, “She has cockroaches in her tea and uses rusty pipe water.” His tea, he tells them, is made from “pure spring water.” Valerka’s emotional deprivation becomes obvious through this episode and other mischievous pranks.

Valerka’s first prank, stopping up the school’s toilets with yeast, gets him expelled from school. The second, derailing a train, causes him to run away as authorities threaten to discover his part in the derailment.

Despite his street-wise ways, Valerka falls in with a dangerous band of thieves and aids them in a number of robberies and even a murder. Later, his old friend, the resourceful Galiya, finds him and helps him escape. As the two friends follow the railroad tracks back to Suchan, the thieves spot them and attempt to kill them.

In one of the film’s most telling scenes, a village dance erupts into a brawl that leaves two amputees writhing on the floor, flailing away at one another. Then, realizing everyone else has gone, they help each other up, forget their differences and make fun of the other guests: “They didn’t even know how to fight. Bumping around like women!”

The themes that run through this depressing, black-and-white movie are the hopelessness of life and that life is a game of chance. The dreariness of life without God anywhere is tragic, but in a frozen Russian gulag, it seems doubly tragic.

Alleviating the hopelessness theme are the songs sung by various individuals from the town drunk to the village madman devouring mud-pie pancakes. Silly and nonsensical, these songs tend to reveal the emptiness of the singers. The songs themselves become contradictions to the singers’ way of life.

If the villagers of Suchan and other Russian villages could only know Jesus Christ as Lord and Savior! Then, instead of being discouraged and hopeless, they could say with the Psalmist: “Why are you cast down, O my soul? And why are you disquieted within me? Hope in God; For I shall yet praise Him, the help of my countenance and my God” (Psalm 43:5).

FREEZE-DIE-COME TO LIFE affords an insightful portrayal of life in this part of Russia. The coarse, earthy sensuality of the villagers is highlighted in the acceptance of prostitution, drunkenness and running naked in the street as an expression of grief. These wretched acts provide poor examples for young people. In addition, through such displays as a fifteen-year old girl attempting seduction to have a child and thereby gain release from prison, we see the cheapness of life. How thankful we can be that the light of Christ’s Gospel has come to us, and we see the preciousness of life.

RECOMMENDED ACTION: Please pray for all those involved in the making of this movie that they will come to know Jesus Christ as Lord and Savior.