JOE VERSUS THE VOLCANO 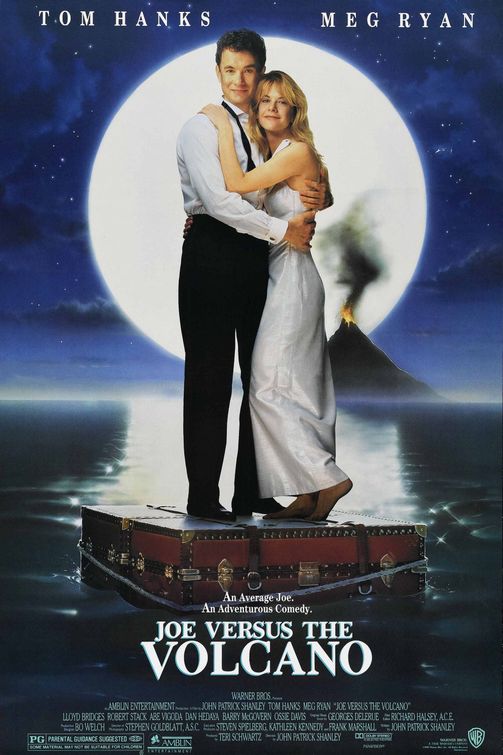 “Once upon a time there was a guy named Joe, who had a lousy job…” From stepping in every mud puddle, so it goes with Joe Banks, who has had it with his life, his job, his boss… everything. A hypochondriac, Joe goes to the doctor only to be told he has a “brain cloud” and six months to live.

Rather than succumb to the dreary reality of the situation, Joe decides to make the most of what’s left. He is approached by a millionaire industrialist, who wants his help to obtain a rare mineral from the natives on an island in the South Pacific. The catch: the natives will only cooperate if someone jumps into the island’s volcano to appease their pagan god. Since Joe’s life is doomed anyway, he agrees to go.

With access to nearly unlimited wealth, Joe outfits himself for the adventure, with everything packed into two huge, oversized trunks. He sets out for the island on a yacht with Patricia, the millionaire’s daughter. A typhoon sinks the vessel, leaving Joe and Patricia adrift on the open seas on his trunks. There are some comical moments, then a moment of seriousness, when Joe, near exhaustion says, “Thank you God for my life. It’s so big!” and collapses.

They awaken on the shores of the island, where after some hilarious satirizing of pagan worship, the natives take Joe to the top of the volcano. Dressed in his dinner jacket, Joe advances to the edge…

Granted, the story is silly, but overall the picture reaffirms that life is worth living, miracles do occur and God is in control. For instance, adrift at sea, Joe asks Patricia, “Do you believe in God?” When she responds “I believe in myself. I have confidence in myself,” he rebukes her. At another point in the film, he counsels someone suicidal that it is better to at least be a risk taker than to take your life.

As Joe awakens to life, he begins to question who he is, and it is a step in the right direction to see a film that gives respect to God. At film’s end, Joe has learned to celebrate life, and realizes that his destiny is not by chance, but by choice. However, there are a couple of crude sexual innuendos, and although Joe utters a few obscenities, he commendably refuses to engage in promiscuity. Film is recommended with caution.

Watch JOE VERSUS THE VOLCANO: