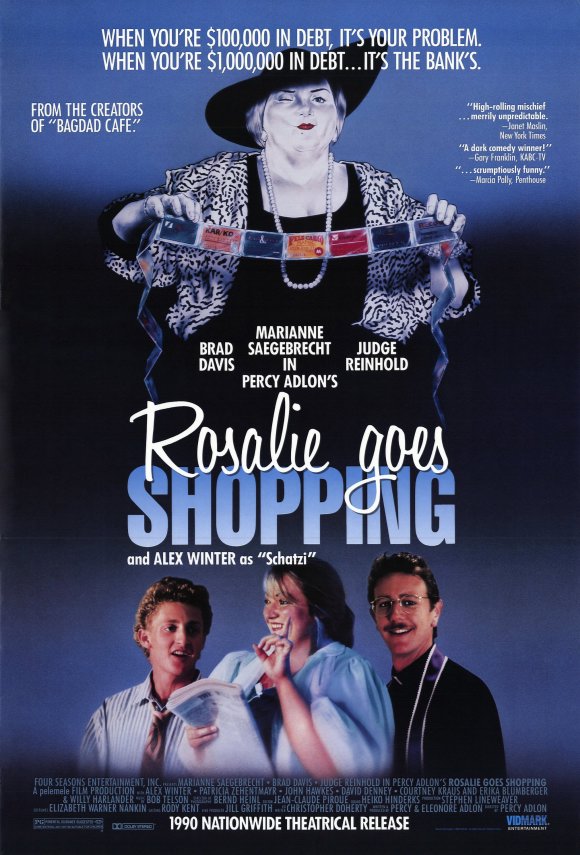 ROSALIE GOES SHOPPING, with no sex, no nudity, no violence and very few obscenities, is the kind of movie secular audiences will deem inoffensive, but Christians should abhor since white-collar stealing is lifted up, rationalized and condoned.

With 37 credit cards to her name, Rosalie Greenspace is in bondage to the world’s financial system. Bouncing checks, shoplifting and falsely reporting a credit card stolen so that she can go on a shopping spree, the unattractive, fat Arkansas mother of seven is a thief and a crook through and through. It is an understatement to say that Rosalie’s mind is fixated on money and material possessions. She denies her family nothing, so they live high on the hog and get their kicks watching videotaped commercials.

After each theft, Rosalie visits a priest to confess, since she mistakenly believes, “You admit the sin, and it’s not a sin anymore.” The priest responds, “It is not enough to confess — you must be sorry.” (He should have added that you must accept Jesus Christ as your Lord and Savior and repent of your sin.) However, Rosalie continues to steal, sliding deeper into debt. She increases by ten-fold the amount on her dim-witted husband’s paycheck advance. When her parents from Germany visit she converts their plane tickets into cash for herself.

Rosalie states to the priest: “We are the consumers who buy goods that are produced.” Somehow Rosalie has the ill-gotten notion she is entitled to those consumer goods regardless of her ability to pay. “Businesses that go bankrupt resurface even wealthier, but, if I go bankrupt, I go to jail. It isn’t fair.” She therefore rationalizes that it’s OK to accumulate debt she can’t afford, as long as she pays the interest.

Then, someone tells her: “If you’re in debt $100,000, it’s your problem. If you’re in debt $1,000,000, it’s the bank’s problem.” Rosalie sets out to do just that by using her daughter’s computer password to obtain sensitive information about the town’s rice mill operation. The priest, who by this time has become more-or-less a co-conspirator, simply mutters, “There’s nothing in the Ten Commandments about electronic penetration of documents.” By the time this sordid tale has ended, Rosalie has swindled and blackmailed a bank VP, recanted her sins to the priest and bought him off with a bribe.

Admittedly, amidst very strong feelings of revulsion, it is hard to feel compassion for this hopelessly lost family headed for oblivion. Of Rosalie, Proverbs 30:20 is true, “She eats and wipes her mouth and says, ‘I have done nothing wrong.'” Without virtue, she is totally reprobate in character. When the priest asks what her conscious tells her, she replies, “I feel good about it (her white-collar stealing).”

The film unabashedly fails to rebuke stealing, bribery, lying, and deception, and, in fact, lifts them up as means to justifiable ends. This is not a cute comedy, but reprobate film making at its worst.